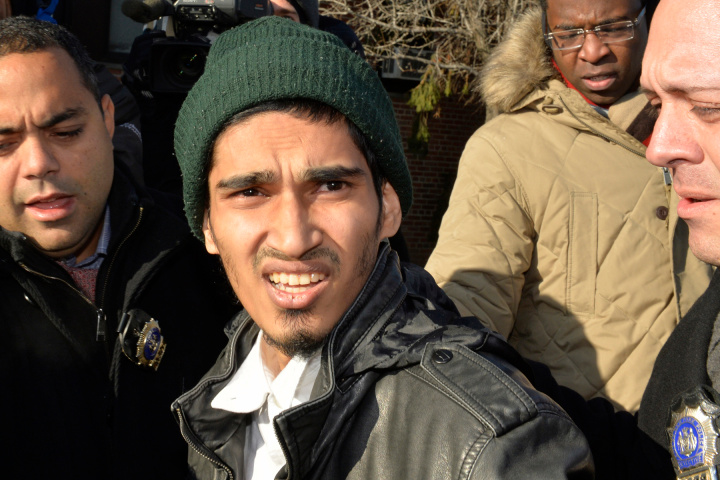 Another crime where the perpetrator was Islamic, another whitewashed story. Rasel Siddiquee, 27, an Islamic immigrant from Bangladesh, brutally hacked his landlord to death. His landlord was 57-year old Mahuddin Mahmud, a businessman and father of three. Police were called to the scene after receiving a call about an assault on McDonald Avenue in Kensington. That’s where they found Mahmud dead, and his head almost completely detached from his lifeless body. Mahuddin Mahmud, himself a Bangladeshi immigrant, had been a law-abiding citizen of the United States for decades. Rasel Siddiquee was arrested and is in custody now for the crime.

Islamist commits a gruesome crime, a beheading no less. The best the media can come up with, in order to protect themselves from Muslim outrage is, “Rasel Siddiquee arrested in murder of Mahuddin Mahmud in Kensington.” Yes, Rasel Siddiquee did kill Mahuddin Mahmud, but he didn’t just murder him. He beheaded him and burned him. However, the decapitation wasn’t quite complete, since his head was not completely detached from his body, but the sight was no less gruesome.

A 27-year-old man has been charged with murder after the landlord of his Brooklyn building was found nearly decapitated in the basement Tuesday, police say.

Rasel Siddiquee was arrested early Wednesday in connection with the death of Mahuddin Mahmud, a 57-year-old businessman and father of three who was found with his head nearly cut off and his face burned in the basement of a building he owned, according to the NYPD.

The 27- year old immigrant from Bangladesh killed the one man who gave him a place to live. Siddiquee had been living in the same basement where Mahmud’s body was discovered. Was Rasel Siddiquee in the United States illegally? It’s a safe assumption, given that Islamists are the “second largest group of illegal immigrants in New York.” The audacity of this is astounding, given that New York City was the epicenter of the 9/11 terrorist attacks. It makes absolutely no sense. But in the leftist, progressive push for ending “Islamophobia,” tying a crime like beheading to an Islamist is profiling. Instead of calling out the truth for what it is, the media buries it and sanitizes it, but it is hard to dispute immigration facts. The Muslim population in the United States has doubled since 1992, and it just keeps growing.

Police found Mahmud’s body after getting a 911 call about an assault at the building on McDonald Avenue in Kensington. Siddiquee lived in the basement, police say.

Family and friends say Mahmud, a Bangladeshi immigrant, came to the U.S. decades ago and worked hard to build a computer software training business.

Mahmud was also a Bangladeshi immigrant, but he was a hard-working man and law-abiding citizen. Given that he had been in the United States for decades, one would assume that he came legally and with every intent of living as normal a life as possible. One report states that next to his wedding portrait, he had an American flag. Without question, he was devoted to America, but his life was brutally taken by an Islamic thug with intent and purpose.

The Bangladeshi immigrant accused of brutally killing his Brooklyn landlord says the property owner teased and humiliated him for not having any money. Rasel Siddiquee, 27, was arrested at JFK airport on Tuesday evening, just before boarding a flight to Kuwait. Police sources tell the Post that when officers picked him up, he blurted out, “I killed someone today.”

Mahuddin Mahmud was found dead and nearly decapitated by his wife and brother, who came looking for him Monday night when he did not return home.

Police sources tell the Times Mahmud was killed with a sword, and the family said at least $20,000 was missing.

Mahmud was decapitated with a sword and robbed. Rasel Siddiquee was caught at Kennedy airport, trying to board a flight to Kuwait, and then to his native Bangladesh. Is there any lingering question that Rasel Siddiquee is an illegal Islamic immigrant? He decapitated his landlord, and took off with over $20,000 before trying to flee to his native Bangladesh.

Mahmud’s family says Siddiquee moved to Brooklyn about five years ago and had been living in an apartment in the building’s basement. They believe the two men got into a fight over some documents Siddiquee wanted to travel back to Bangladesh.

This crime is one more indicator of the outrageously lax immigration policies within the United States. Anyone can get in this country. The official religion in Bangladesh is Islam. Until immigration policies make it impossible for an immigrant to come to the United States from Bangladesh and other Islamic countries, this wave of Islamic brutality will continue. However, with Islamists in the White House, Department of Homeland security, and in every other level of government, there is zero chance of banning Muslim immigration.  We’ve been overrun and there is no one to blame but Islamic sympathizers for this tyranny. Sadly, another life was lost in the process.