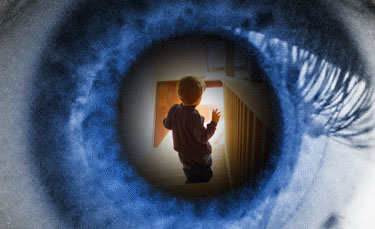 Because we’re living in that oh-so-trendy technocratic age where everything needs to be traced and tracked, why not chip your children with a trendy new RFID (Radio-frequency identification) bracelet? 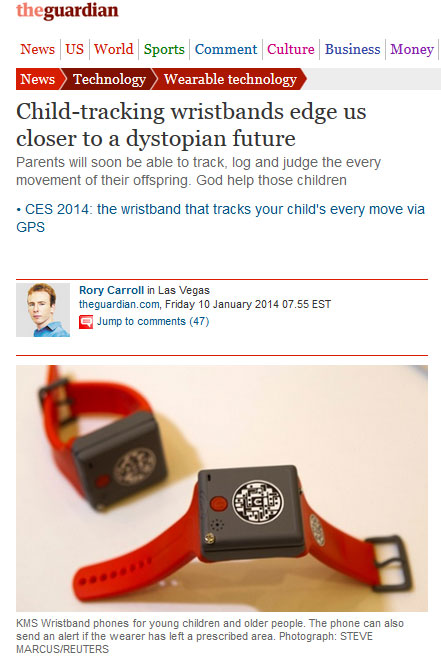 That’s right, now you too can know your child’s every single move via tracking chips and GPS. The Guardian‘s Rory Carroll tells the story of the Orwellian future of parenting as created by Cisco Systems:

For those who think the NSA the worst invader of privacy, I invite you to share an afternoon with Aiden and Foster, two 11-year-old boys, as they wrap up a Friday at school. Aiden invites his friend home to hang out and they text their parents, who agree to the plan.

As they ride on the bus Foster’s phone and a sensor on a wristband alert the school and his parents of a deviation from his normal route. The school has been notified that he is heading to Aiden’s house so the police are not called. As they enter the house, the integrated home network recognises Aiden and pings an advisory to his parents, both out at work, who receive the messages on phones and tablets.

The system also sends Foster’s data – physical description, address, relatives, health indicators, social media profile – to Aiden’s parents, who note he has a laptop. Might the boys visit unsuitable sites? No, because Foster’s parental rating access, according to his profile, is limited to PG13, as is Aiden’s.

Foster spots a cookie jar and reaches in. Beep beep! His wristband vibrates to warn him the cookies contain gluten, and he is allergic. Aiden’s mother notes this and consults a menu of her fridge and pantry, all connected to the network, for non-gluten ingredients. There aren’t enough so she orders a gluten-free pizza.

The boys turn on the TV. Rather, it turns itself on as Aiden approaches and it lists his favourite channels. The TV notes the boys have a basketball, which has a sensor, and so suggests an NBA game. As they watch, tailored advertising invites Aiden to put a Miami Heat shirt on a personal wishlist connected to a chain store. He does so and a ping is sent to his mother, who simultaneously receives a reminder of the date of his birthday.

The network notes there is only 90 minutes left of sunlight left and that Aiden has not completed his 120 minutes of daily exercise. It shuts down the TV and gives the boys three exercise options. They choose to shoot hoops in the yard. Aiden’s mum receives an alert that they have left the house – leaving the lights on. She can track Aiden’s pulse and blood pressure as he plays.

Such is the dystopian future we’re all skipping merrily into…government agencies and law enforcement flippantly ignoring basic human rights to privacy, CCTV cameras on every street corner, smart appliances that spy on people living in a smart grid where everything they do becomes data and they can’t even throw garbage away without it being chipped and analyzed somewhere in real time…

A future complete with training children that it’s totally normal to be stalked with technology and to never have even a single moment of privacy, starting when they’re too young to even think critically about what these tracking bracelets really are — invisible, digital prisons.

When these children grow up into the magical future of big brother’s wildest dreams, they’ll think living means to never truly be alone, to always have someone watching, listening, following their every single move…

All this trendy tech is just breeding a culture of dependence and enslavement.