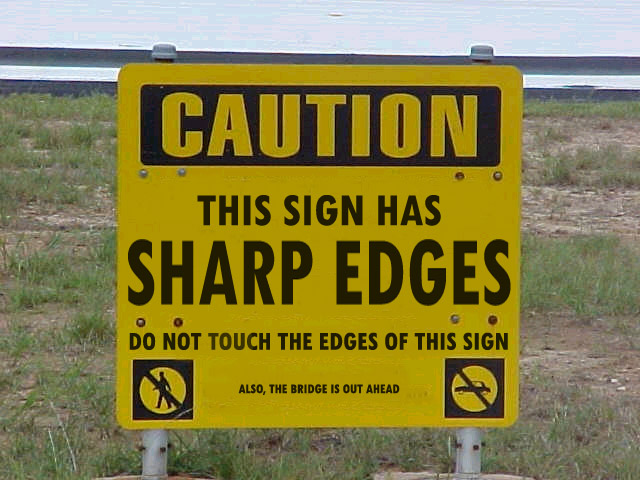 Do you ever have one of those days when you’re reading the news, and you have an epiphany?

This morning I realized, looking over the day’s information, we don’t need to be depopulated. No dramatic measures need to be taken. People are dumb enough to do it all on their own. Darwin was right – they’ll just weed themselves out.

First, I came across this little gem on Twitter.

You’ve got that right – parents have to TELL THEIR CHILDREN NOT TO SNORT CANDY UP THEIR NOSES.  My kids could be some kind of brilliant prodigies or something, but I never ever had to make this recommendation to them, nor did I need to wave the threat of maggots growing inside their nostrils to keep them from doing such a thing.

According to WPRI, the note sent to parents via email explains the methods in which students have been ingesting the sugary candy, including smoking and snorting.

School officials said snorting and or smoking the candy could cause nasal problems, infections, lung irritations, allergic reactions or possible maggots inside the nasal cavity. (source)

Speaking of kids, I suppose when the babysitters don’t realize it’s wrong to tattoo the pre-teen children in their care, the kids being “cared” for don’t have much of a chance at learning critical thinking.

Then I read about how the cops in New York City are working so hard to keep people safe that they’re beating the daylights out of people for breaking no-victim laws.  An elderly gentleman crossed the street outside of the crosswalk and was beaten until he was bloody by a plethora of cops.  And the reason?  You’ll love this quote from the Mayor’s office”

“We won’t sit by while lives are lost and families are torn apart. These latest crashes underscore the urgent need to make our streets safer, which is why we are moving decisively to enact ‘Vision Zero’.” (source)

The icing on this morning’s coffee cake of ignorance was a video by Mark Dice.  It’s hard to imagine that anyone in the state of California could be unaware of the radioactive disaster that is Fukushima, but Dice was able to give away bottled “Fukushima water” to dozens of passersby, with one gentleman saying he’d like a thousand bottles.

The food is poisoned by Biotech, the water is poisoned deliberately by water treatment plants and a variety of disasters, and people’s minds are poisoned by inane television programs and a constant stream of electronic interactions.

People aren’t living their lives, they are Tweeting them, Facebooking them, and Instagramming them so that everyone else can see what the person holding the cellphone is not seeing, but photographing.  They’re looking for a constant stream of approval via cyber “likes” and “thumbs up”.  They are more concerned with the Kardashians than the Constitution, more worried about the fate of The Bachelor than the fate of Bradley Manning, and fervently devoted to watching other people exercise on The Biggest Loser. Everything comes with a warning label and protective equipment because heaven forbid someone not have the common sense to realize that something is dangerous – they’ll sue the manufacturer six ways to Sunday for not protecting them from Natural Selection.

Seriously, none of these global elite eugenicists will have to do a darned thing.  Don’t worry, Bill Gates, you just relax. Darwin’s got this.

And this is before disaster strikes and our way of life has to change of a necessity.  Once hospital care isn’t easy-access, food doesn’t magically appear on grocery store shelves, and heat doesn’t happen at the turn of a rheostat, the iPhone junkies will drop like flies in a bug zapper. What are the candy-snorters going to do when welfare stops and they actually have to physically work in order to eat?

For those of us who are more aware, survival will entail staying out of the way and being ready to protect ourselves while the rest of society starves, goes through withdrawal from all of the psychiatric drugs keeping them in full-sheeple mode, and otherwise implodes.