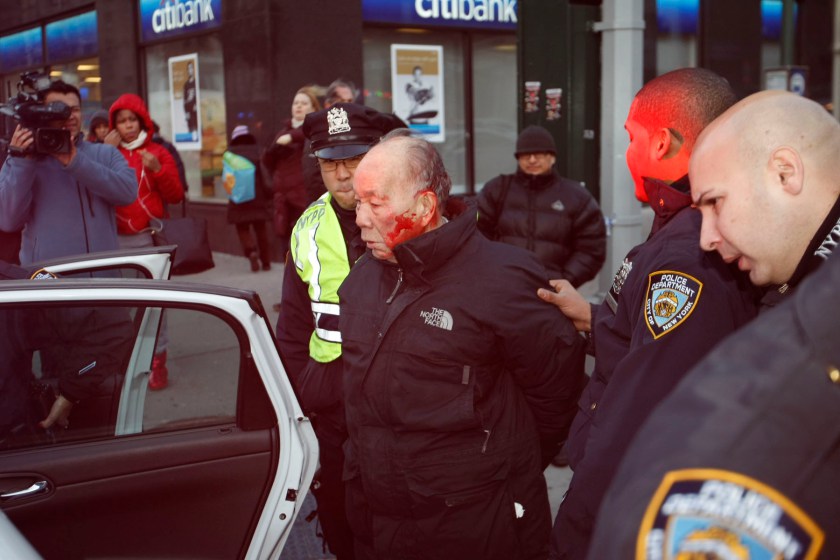 The residents of New York City can all rest a little easier now. Eyewitnesses said that it took numerous cops to do it, but a dastardly criminal was finally subdued.

When an officer saw 84 year old Kang Wong cut across the street, he sprang into action. The member of New York’s Finest knew that you can’t just cross the street all willy-nilly like that, no matter who you are. Being elderly is no excuse for breaking the law.

Kang Wong was strolling north on Broadway and crossing 96th Street at around 5 p.m., when an officer told him to halt because he had walked against the light.

Wong, who lives a block away, appeared to not understand the cop, the witnesses said. “The guy didn’t seem to speak English. The cop walked him over to the Citibank” near the northeast corner of 96th and Broadway, said one witness, Ian King, a Fordham University law student. “[The officer] stood him up against the wall and was trying to write him a ticket.

The man didn’t seem to understand, and he started walking away. “The cop tried to pull him back, and that’s when he began to struggle with the cop,” said King, 24. “As soon as he pushed the cop, it was like cops started running in from everywhere.”

Wong was left bleeding and dazed with cuts to his face. He was cuffed and taken to St. Luke’s Hospital. After several hours, he was hauled off to the 24th Precinct station house. (source)

Let’s recap here. This is what went down.

An elderly man crosses without the aid of a crosswalk. A cop sees and tells him to stop .

The man, who perhaps is not a native English speaker, doesn’t understand.

So the cop drags him off the street and pins him against the wall. The old guy, afraid, tries to get away.

Then the arresting officer and all of his cop friends beat the crap out of an 84 year old man, handcuff him, and cart him off.

It gets worse. The elderly man’s son, an attorney, had extreme difficulty trying to aid his father. And let’s remember, his father doesn’t speak the language, has been brutally assaulted, and is now cuffed and confined. For jaywalking.

He first heard his dad had been busted in a 6 p.m. phone call from cops, who asked if the elderly man needed medication but would not say which hospital he’d been taken to.

So the son went to the station house, where he said he got a similar run-around. Finally, he found out on his own that his dad was at St. Luke’s and had been arrested for jaywalking. “Oh, great! Beating up on an 84-year-old man for jaywalking,’’ he said.

Neither the hospital nor the cops would allow him to see his dad until after 10 p.m., explaining that since he’d not been admitted, he was not a patient, but a “prisoner.’’

All because he jaywalked.

Police in New York City are currently on a revenue-generating spree of ticketing jaywalkers to the tune of $250 per offense. Cloaked under the do-good guise of serving and protecting, this is part of “Vision Zero“, a program introduced in Sweden that purports to reduce traffic fatalities to zero.

Ironically, the Mayor’s office said that the program is in place to make the streets of New York City safer.

Mayor de Blasio’s spokesman, Phil Walzak, said, “We won’t sit by while lives are lost and families are torn apart. These latest crashes underscore the urgent need to make our streets safer, which is why we are moving decisively to enact ‘Vision Zero’.”

So be reassured – if you are in New York, you won’t get run over by a car if the cops have anything to say about it. They are determined to do everything in their power to keep you safe, including punching you, cuffing you, and yelling at you in a language you don’t understand. It needs to be perfectly clear that being old, handicapped, or mentally ill does not give you an excuse to break the law

There will be no traffic fatalities on their watch. A cop might beat the crap out of you, but you won’t get hit by a car.