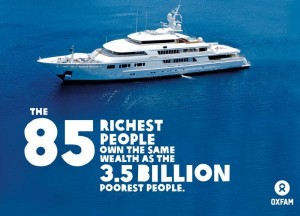 Did you know that the 85 richest people in the world have about as much wealth as the poorest 50% of the entire global population does?  In other words, 85 extremely wealthy individuals have about as much wealth as the poorest 3,500,000,000 do.  This shocking statistic comes from a new report on global poverty by Oxfam.  And actually Oxfam’s report probably significantly underestimates the true scope of the problem, because Oxfam relies on publicly reported numbers.  At the very top of the food chain, the global elite are masters at hiding their wealth.  In fact, as I have written about previously, the global elite have approximately 32 trillion dollars (that we know about) stashed in offshore banks around the world.  That would be about enough to pay off the entire U.S. national debt and buy every good and service produced in the United States for an entire year.  These elitists live on an entirely different planet than the rest of us do.  In fact, according to Oxfam, the richest one percent of the global population has 65 times more wealth than the bottom half of the global population combined.

There is certainly nothing wrong with making money.  In fact, the founders of the United States intended for this nation to be a place where free markets thrived and where everyone could pursue their dreams.  Unfortunately, this country (along with the rest of the world) has moved very much in the opposite direction.  Today, we have a debt-based global financial system which is dominated by gigantic predator corporations and big banks.  Working together with national governments, these corporations and banks have constructed a system that I like to call “Corporatism” in which the percentage of all global wealth that is being funneled to the very top of the pyramid steadily grows over time.

The Founding Fathers were very correct to be very suspicious of large concentrations of power.  In the early days of the United States, the federal government was very small and the size and scope of corporations was greatly limited.  Our nation thrived and a huge middle class blossomed.

Sadly, over the past several decades the pendulum has completely swung in the other direction.  Today, our society is completely and totally dominated by big banks, big corporations and big government.

And of course this is also happening in virtually every other nation on the face of the planet.  The global elite have rigged the game to send just about all of the rewards their way, and it is working.  The following are facts taken directly from Oxfam’s latest report…

•Almost half of the world’s wealth is now owned by just one percent of the population.

•The wealth of the one percent richest people in the world amounts to $110 trillion. That’s 65 times the total wealth of the bottom half of the world’s population.

•The bottom half of the world’s population owns the same as the richest 85 people in the world.

•Seven out of ten people live in countries where economic inequality has increased in the last 30 years.

•The richest one percent increased their share of income in 24 out of 26 countries for which we have data between 1980 and 2012.

•In the US, the wealthiest one percent captured 95 percent of post-financial crisis growth since 2009, while the bottom 90 percent became poorer.

Starting on Wednesday, several thousand members of the global elite will gather for the World Economic Forum meetings in Davos, Switzerland.  The following is how USA Today described this conference.

For several days at the end of January, presidents, prime ministers, monarchs and corporate titans jostle with actors, rock stars and major influencers for top billing at the annual meeting of the World Economic Forum. The confab takes place in the Alpine village of Davos, about 90 miles southeast of Zurich, and for a brief spell each year the pristine ski resort half-sheds its Graubünden roots and becomes a ground zero for the political and business elite.

Unless you are independently wealthy, you can forget about going to this conference.  A ticket to Davos is going to cost you about $30,000, and that is on top of the $55,000 that it costs to join the organization.

Needless to say, it is an organization of the elite, by the elite and for the elite.

This year, the theme of the meeting is “The Reshaping of the World: Consequences for Society, Politics and Business“.  And the founder of the World Economic Forum says that the time has come to press the “reset” button for the global economy…

It’s time to press the “reset” button on the world, the founder of the World Economic Forum said Wednesday, addressing media ahead of the WEF’s much ballyhooed annual meeting in Davos-Klosters, Switzerland, that gets underway in a week’s time.

“The world is complex, it’s fast-moving, it’s interconnected, and we in Davos want to provide a mirror to the world as it is. It is not a meeting devoted to one set of issues. It’s a meeting that address the complexity of our world,” said Klaus Schwab, the WEF’s founder and executive chairman.

Personally, I would love to hit a “reset” button for the global economy.

But what the elite mean by “reset” is much different from what most of the rest of us would mean.

“At an international level, the formal architecture forglobal governance was not designed for the interdisciplinary challenges and collective action problems of today. As a result, international cooperation has yet to fully enter the information age and capture its associated productivity gains.”

The elite never actually want the pendulum to swing back in the direction of the “little guy”.  The elite are generally pleased with how the game is being played because they are winning.

Most people don’t even realize that they are participants in a debt-based neo-feudalist system in which money is being used as a form of social control.

There is no way that all of this debt could ever be paid off at one time.  It is mathematically impossible.  Over time, all of this debt transfers the wealth of the planet away from us and to the global elite.  If this game was allowed to go on long enough, eventually they would have nearly all of it.

And some would argue that we are already getting close to that point.  A study by the World Institute for Development Economics Research discovered that the bottom half of the global population only owns approximately 1 percent of all wealth, and at this point about a billion people throughout the world go to bed hungry every night.

This is one of the reasons why I am so adamant about the fact that the Federal Reserve needs to be shut down.  It is at the very heart of the debt-based system that we have in the United States, and over the past 100 years it has brought us to the brink of economic Armageddon.

Sadly, most Americans do not understand any of these things.  They just assume that the debt-fueled prosperity that we have been enjoying will be able to go on indefinitely.

So is there any hope for the “little guy”?

Well, you could try to win the one billion dollar NCAA tournament bracket contest that Warren Buffett is backing.

Or you could go out and try to win the lottery or try to date a famous professional athlete.

But the odds of any of those things actually happening are so low that they aren’t even worth mentioning.

Personally, I would rather spend my time trying to wake people up and help them understand how our global system really works.

I believe that a “great awakening” is coming.

I believe that as the darkness gets even darker that the light is going to get even brighter.  I believe that we are going to see “renewal” on a whole bunch of different levels.

Yes, there is going to be a tremendous amount of pain.

But it won’t all be bad news.

The times ahead are going to be full of adventure and excitement for those who are willing to embrace it.

So what do you think about what is coming in the years ahead?  Please feel free to share your thoughts by posting a comment below… 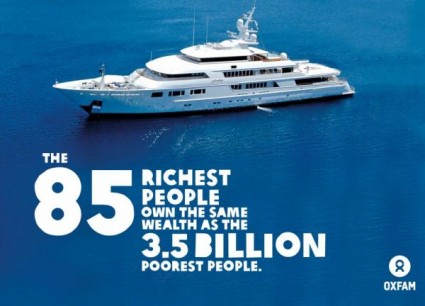