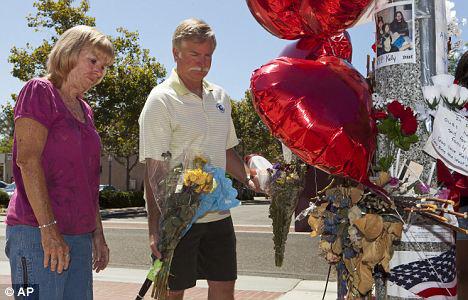 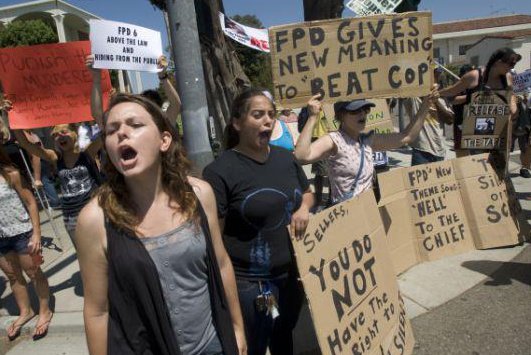 After being involved with the Kelly Thomas murder case for the last 2 1/2 years, protesting, attending council meetings, fundraiser involvement, writing letters and articles, videotaping and taking pictures, attending court dates, listening to the specifics of the murder by the DA (before the video was released), hearing dozens of witnesses to the murder…. all of which culminated in a televised murder (which clearly showed MURDER) and the acquittal of two of the cop murderers and no charges for the other four cops who also participated, I attended last night’s Fullerton city council meeting to add my support. I wanted to share some of the highlights…

30-year-old Adam Walder, a resident of Fullerton, California, walked up to the microphone at last night’s Fullerton City Council meeting where an update of the Kelly Thomas/Manuel Ramos/Jay Cicinelli trial was to take place.

Adam described being at a protest in Fullerton on the previous Saturday to express his differing opinion of the wrongful verdict of acquittal of those two Fullerton cops who murdered Kelly Thomas.

As he held his sign and videotaped the happenings, he was encountered by police in riot gear, ordered to disperse and then thrown into a paddy wagon, when he didn’t move fast enough.

As he was being driven to the county facility by these “heroes in blue”, one of the “peacemakers” who obviously was obeying policy, leaned over to Adam and a few others in the cage on wheels and said with evil malice in his voice, “There is a pack of 12 cops waiting to smash your fucking faces in.” Then another one of these oath breakers, who puts his life on the line daily, announced to all while smirking, that he had two words for everyone, “NOT GUILTY” (as he laughed).

Others that spoke last night described seeing police in Fullerton driving around in unmarked cars snatching those who were videotaping from the streets.

70-year-old Jean Thaxton, whose son Mike was shot by a cop in the back due to them having the wrong identity, stated she, too, was at the same protest Adam was at, that she witnessed no riots other than some young folks tagging the police doors, which she didn’t like. However she said at that point overkill happened when 50 cops emerged with riot gear and weapons and started snatching people off the streets for nothing.

She called for whistleblowers to be protected and for all charges from Saturday’s protest to be dropped immediately.

A lot of eyewitnesses spoke of MSM people physically pushing alternative media out of their way, one provoked a fist fight with a protester (the news person from CBS), who got punched but started the fight, called 911 and had the protester arrested. So the protest is being labeled as “violent” by these “news” people we all trust to give us correct information.

The ministry of propaganda also reported only 150 people showed up to this protest, although witnesses at the protest say there were at least 400 in attendance.

The new Chief of Police for Fullerton, Dan Hughes, vowed last night, that he is standing by his original recommendation that these cops be fired. The final say is with the council members as they act like de facto judges. The question remains…will they stand by Chief Hughes recommendation?

After last night’s lambasting and cry out of utter disbelief of the unfair trial and verdict, by concerned American citizens, some who spoke through shaky voices, I don’t think any of the council members would be up for another round of recalls. They would look forward to this if any of them gave a hint of wanting to take the cops back.

The souls of a lot of American cities are being ripped apart by police.

As my Fullerton friend Steve Baxter said last night, “If police policy is to taunt an innocent person, beat, tase, flip over the taser to use as a club to beat someone some more, then leave the person for dead, something is wrong with the policy.”