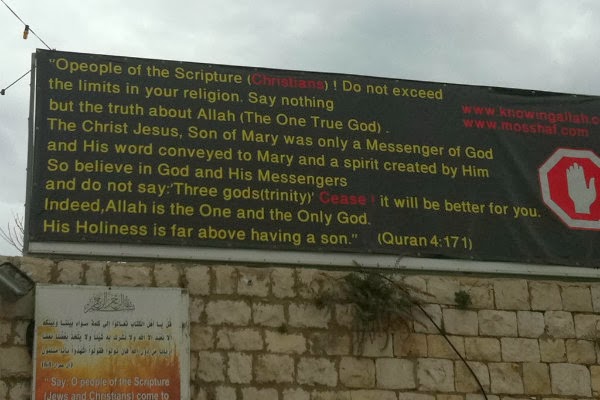 More of the vicious supremacism of a deeply flawed and perverse ideology. They cannot pray and just be who they are. They have to destroy and murder anyone who does not believe what they believe. Essentially there is no confidence in Islam, which is why any other belief system is so reviled and perceived as a threat.

Nazareth is the childhood home of Jesus Christ, hence Jesus of Nazareth. And this is where these thugs erect a sign.

Nazareth: Qur’an billboard warns Christians not to “exceed the limits in your religion” by believing in Trinity and divinity of Christ,” from Israel Today, January 21 (Robert Spencer via  Blazing Cat Fur):

“Cease! It will be better for you.” The threat is unmistakable. “Nazareth Christians Warned Against ‘Slandering’ Allah,”

As Christians of every stripe in Jesus’ hometown of Nazareth begin to again take a real stand for their faith, local Muslims are warning them not to overstep the boundaries of their traditional place in the Middle East (hint: they must remain dhimmis, or second-class).

A large billboard hanging at a central point in Nazareth features a picture of an Israeli stop sign, along with the English translation of a verse from the Koran cautioning Christians (and Jews) to speak only the “truth” regarding Allah.

“O people of the Scripture (Christians)! Do not exceed the limits of your religion. Say nothing but the truth about Allah (The One True God). The Christ Jesus, Son of Mary, was only a Messenger of God and His word conveyed to Mary and a spirit created by Him. So believe in God and His messengers and do not say: ‘Three gods (trinity)’. Cease! It will be better for you. Indeed, Allah is the One and the Only God. His Holiness is far above having a son.”

Evangelical Christians from Nazareth have become a growing and integral part of the overall Messianic body in the land, while traditional Christians (Catholics, Greek Orthodox, etc) have been waking up to their historical and religious connection to the Jews and are joining the Israeli army in ever greater numbers.