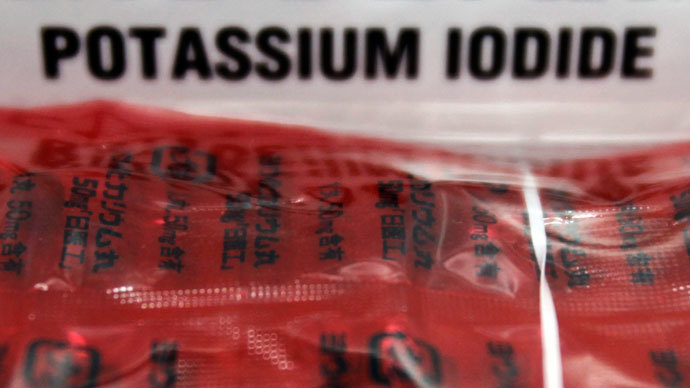 Health officials in the coastal Canadian province of British Columbia are cautioning residents not to try and qualm fears of radioactive contamination by ingesting mass quantities of potassium iodide.

Journalist Dan Fumano of BC’s The Province newspaper wrote this week that potassium iodide pills have been flying off the shelves of area drug stores after reports published on the internet advised people that illnesses brought on by nuclear radiation can be remedied by taking regular doses of the inorganic compound.

The British Columbians buying those pills, Fumano wrote, are largely fearful that nuclear waste leaked into the Pacific Ocean three years ago by the destruction of the Fukushima power plant across the pond in Japan is washing up on their shores.

But while potassium iodide does indeed possess its fair share of positive qualities, experts say ingesting those pills is unnecessary and could cause lead to potentially dangerous overdoses.

Fumano wrote that potassium iodide sales in BC surged immediately after the Fukushima disaster, and have again in recent months started to climb. At least one pharmacist he spoke with said she’s been sending people out of the door of her drug store when they request the quasi-cure-all pills.

“There were other instances where rumors have been rampant and misinformed the public, but nothing to the degree that (Fukushima) has,” pharmacist Pam Magee told him.

According to Magee, customers have been coming into her store asking for potassium iodide doses that are hundreds of times over the recommended intake.

“I only know the litany of pathologies that can ensue with this kind of dosing,” she told Fumano. “I always warn people against it and they often go away mad and exasperated by my stupidity.”

Other experts in the field agree. The Health Physics Society says on their website that Kl — the scientific shorthand for potassium iodide — “has been erroneously represented as a ‘magic bullet’ of radiation protection.”

Immediately after the Fukushima disaster, Dr. Glenn Braunstein of the Cedars-Sinai Medical Center in Los Angeles, California told the Huffington Post that the amount of radiation from Japan that would ever end up across the ocean would likely be “less than the radiation one could get in flying from Los Angeles to New York.”

“I think I would describe it as subclinical panic,” Braunstein added at the time. “I think there’s a lot of concern out there because radiation — you can’t see it, you can’t feel it, but everybody knows it has potentially disastrous results.”

Three years later, that panic is again on the rise in British Columbia.

“If I lived next door to Fukushima, or somewhere in that area, I might well consider having KI, or potassium iodide, in my medicine chest. But not here,” BC health officer Dr. Perry Kendall added to The Province.“We wouldn’t recommend it, because it wouldn’t convey any benefit, and it might convey some risk.”

According to the US Food and Drug Administration, potassium iodide overdoses can cause shortness of breath, difficult swallowing, fever and joint pain, and could warrant immediate medical attention in some cases.

Meanwhile, British Columbians aren’t the only ones in the area concerned. The Department of Environmental Conservation in the adjacent state of Alaska announced on Thursday this week that officials there are not actively testing fish for nuclear radiation amidst similar fears, but that data from BC authorities and federal agencies say so far there isn’t anything to worry about.