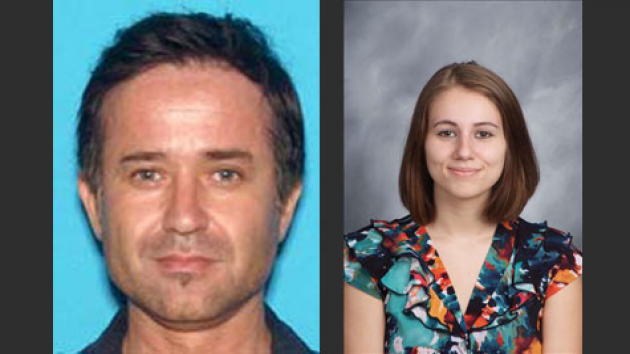 I understand that under Islamic law (sharia), a 16-year-old girl is an old coot, but this is America, still.

Tiffany Snook was reported missing on Nov. 12. Police now believe that she was with Sezer Gok, 40.

At some point they were married in a Muslim religious ceremony, a Pasco sheriff’s report states.

In what state was this sharia marriage made? The few states that allow a 16-year-old girl to get married only do so with parental consent. Why did the mosque perform the marriage? Why didn’t the mosque call authorities?

He groomed her and took advantage of a young stupid girl.

WESLEY CHAPEL — They met at the mall in her small central Illinois hometown. He came from Turkey and ran a kiosk in Bloomington. It was either June or July last year, detectives say.

Tiffany kept her relationship with Sezer Gok a secret from her parents, authorities said. She began working for him. He named a new kiosk for her: Tiffany’s Balloons.

Tiffany and Gok must have planned to leave, said Bloomington police Detective Tom Rena, because it all happened so fast. Gok had been working days, if not weeks, in advance to close down each of his kiosks. She left high school and family behind.

Before anyone even knew, they were gone.

”By the time we caught up with them leaving,” Rena said, “we were about 10 steps behind them.”

At some point they were married in a Muslim religious ceremony, a Pasco sheriff’s report states. They first stopped in Pittsburgh. There, the report states, Gok read a news story alleging he abducted Tiffany. He got nervous and took her to Tampa.

Tiffany never told her parents where she was, Rena said. During the two months she was missing, she called them once, just before Christmas.

Back in Bloomington, Rena worked with U.S. marshals to track Gok’s location. The couple moved to Glenwood Mobile Home Park on Habersham Lane east of Tampa. Then on Jan. 12, they rented a house at 5909 Azure Drive in Wesley Chapel.

Rena would not reveal investigative techniques, but marshals located Gok. Authorities went to the home at 8:30 p.m. Tuesday and arrested him.

Investigators interviewed Tiffany, now 17, who told them she was seven weeks pregnant with Gok’s child and that she was “fully committed to Muslim faith,” said sheriff’s spokeswoman Melanie Snow.

Tiffany was taken into child custody. Her father has since picked her up, Rena said.

Gok, now 40, remained in the Land O’Lakes jail Wednesday on charges of interfering with custody and sheltering a runaway. More charges are pending against him in Illinois.

U.S. Immigration and Customs had placed a hold on his release.

No one was home Wednesday afternoon at the light pink Wesley Chapel home with “Princess” etched into the door knocker.

A silver Jeep Cherokee with Illinois plates, listed as Gok’s vehicle by Bloomington police, sat in the driveway. Duct tape covered a gash in the SUV’s rear end.

On the driveway, closest to the rear passenger side of the SUV, lay a pair of girl’s jeans, still folded, and a make-up case.