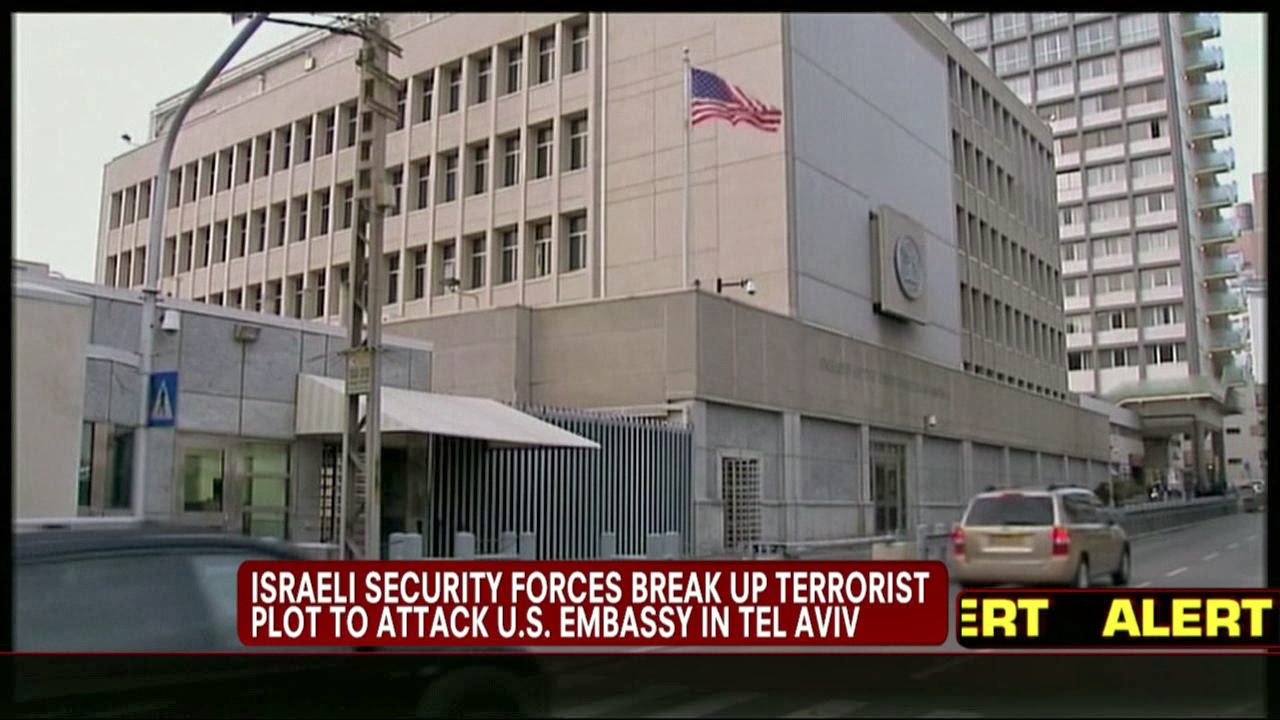 Fact: Barack HUSSEIN Obama has said al-Qaeda has been “decimated,” and “on the path to defeat” at least 32 times since the attack in Benghazi.*

Oh the hypocrisy of it all for while Obama and John ‘Swiftboat’ Kerry were busy twisting Israel’s arm to free terrorists so the Palestinian Authority…terrorists in their own right… would be placated (bribed actually) to stay at the negotiation table, Israel was doing what they do best…breaking up terrorist plots…and this latest one was a plot targeting the US embassy in Tel Aviv, the Jerusalem Convention Center, and a bus line that connects Jerusalem with a Jewish settlement in the West Bank.

And this attack was conceived and orchestrated by none other than the Obama claimed“decimated” terror group…al-Qaeda…and Israel just saved Obama’s butt from being called to task for yet another attack on a US Embassy.

And this thwarted attack was different than other al-Qaeda attacks as this was the first time they planned an attack on Israeli soil proper, but thankfully those involved were caught before their plans could be carried out. And as Israel’s Shin Bet intelligence agency lifts an in-place gag order, many of the specifics of the planned attack that do NOT jeopardize Israeli national security are coming to light. And this is what we know so far…the plot was conceived by the infamous (nowhere near“decimated”) terrorist group al-Qaeda…in fact it was conceived by none other than al-Qaeda leader Ayman al-Zawahri himself…the three terrorists (two from East Jerusalem and one a Palestinian from Gaza) caught and arrested were recruited through….are you ready for this…Facebook…and were given their ‘marching orders’ via Skype by an al-Qaeda operative named Ariv Sham, who was based in the Gaza Strip.

“The Gaza Strip has become a terror base for al-Qaida, while in the West Bank the group’s activities are still in early phases and can be stopped,” said a Shin Bet official…to which I say they can only be stopped if this farce of so-called peace talks are put to rest that is.

According to what’s being released, the plot involved sending three suicide bombers to the Jerusalem Convention Center, then sending a truck bomb and two suicide bombers to the U.S. Embassy. And isn’t it odd that none of this…NOT one bit of it…was picked up by our intelligence agencies even with some of the group ready to go to Syria to put together final preparations for the attacks nor did we pick it up even after the attack was thwarted, as this attack was to have taken place back in December.

Probably smart of BiBi NOT to give anything away when you think about it what with Obama still having the knife dug deep into Israel’s back.

But when Obama was finally informed about the foiled attack, instead of outwardly thanking Israel for potentially saving American lives, he had the State Department issue a statement that did NOT confirm Israel’s claims but one that said that it was “just beginning efforts to understand the alleged plot” and referred questions to Israeli authorities.

“Our folks are still looking at it,” State Department deputy spokeswoman Marie Harf said at a hastily arranged press briefing. “I’ll let the Israelis speak for what evidence they have…I don’t have reason to believe it’s not true; I just don’t have independent verification.”

Oh please….and what constitutes ‘independent verification’ pray tell…Israel just saved the lives of Americans who might have become more notches on al-Qaeda’s belt, but I guess to Barack HUSSEIN Obama if Americans had been killed they would have just been more ‘bumps in the road.’

al-Qaeda…the anything but Obama said “on the path to defeat” terror group is determined to wreck havoc and carnage on a worldwide scale. And in these five years since Barack HUSSEIN Obama became America’s president (gag) they have been fueled on and encouraged by his total ineptitude in office, his leading from behind (when and if he leads at all), his appeasement of anything his muslim brethren do (as in where is his outrage over the slaughter of Christians throughout the Middle East and North Africa), his moral weakness of character, and his outright refusal to take a stand against islam itself…the once and forever true enemy of America.

NO…al-Qaeda is thriving because of Obama NOT in spite of Obama.

And just as Hillary seemed to have wiped her hands of Benghazi…or so she thinks…Obama is wiping his hands in regards to the threats Israel…and Americans living and working in Israel…currently face because of him. To Obama any Americans killed in Israel at the hands of al-Qaeda…just like the four killed in Benghazi…or killed at the hands of the Palestinians for that matter…will be carefully hidden amongst a LIE concocted to completely dismiss it….a LIE whose groundwork will probably be laid by Valerie Jarrett…the one truly pulling Obama’s strings. Valerie Jarrett…the very one those on the left look to to make sure that Israel NEVER is able to declare victory over al-Qaeda or over the Palestinian terrorists…the one the left looks to to make sure that Israel loses even more land to those whose ultimate goal is to wipe them off the map.

Barack HUSSEIN Obama should be praising Israel…should be thanking Israel…for doing their due diligence in saving American lives. In fact he should be sending our intelligence agencies over there to learn how Israel thwarted what we didn’t. And just maybe Obama should now order the NSA to stop spying on ‘We the People’ and pay attention to and focus on the communications of al-Qaeda and other terror groups…the true danger to both Americans abroad and to all here at home.

But then again in doing that Obama would be going against those to whom his true allegiance lies…and that is the saddest thing of all…besides BiBi NOT being our president that is.