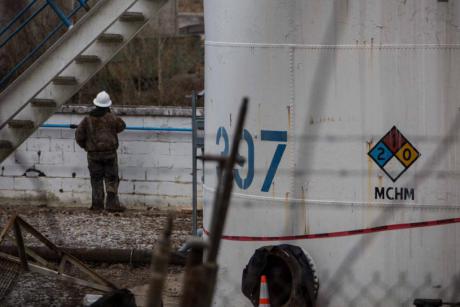 The water situation in West Virginia is going from bad to worse.

Actually, it was worse from the get-go, but a very disturbing fact was hidden.

It has been discovered that a second toxic chemical has been leaked into the water supply, and it wasn’t reported by the sketchy Freedom Industries until 12 days after they realized that the leak had occurred. Apparently this chemical was in the same tank that polluted the water with 4-Methylcyclohexane Methanol.

The company told investigators that the Crude MCHM that leaked also contained a product called “PPH,” according to state and federal officials.

State officials said late Tuesday that, after consulting with West Virginia American Water Co., they believe the water company’s Elk River plant would likely have removed the chemical from drinking water during its normal treatment process. Additional testing of some of the original water samples from the first days after the incident is being conducted to confirm that, officials said. (source)

So, if I understand the situation correctly, this chemical was not reported because they just figured the water treatment facility would take care of it…without knowing about it?

Freedom Industries is frantic to reduce their liability

Freedom Industries, it is to be noted, immediately filed for bankruptcy after the original spill. This means that it would be very difficult for anyone to be sued for the damage caused by the spill or for the health problems that the noxious toxins cause.

The Chapter 11 bankruptcy filing will allow the company — facing at least two dozen class-action lawsuits and several state and federal probes — to reorganize and continue operating under federal law.

Officials for the defunct Freedom Industries seem to be well aware that they are in the wrong.

Mike Dorsey, director of homeland security and emergency response for the state Department of Environmental Protection, said he learned about the additional chemical’s presence in the tank that leaked at about 10 a.m., just before a routine daily meeting with various agencies and Freedom Industries about the situation at the site.

Dorsey said Freedom Industries President Gary Southern asked to speak with him privately, told him about the chemical being in the tank, and handed him data sheets on the material, which Dorsey referred to as polyglycol ethers.

“He said, ‘I’m going to have a terrible day today,’” Dorsey said.

Dorsey said there were about 300 gallons of PPH in the tank that leaked. It’s not clear how much of that material leaked out of the tank or how much reached the river.

Dorsey said he was “extremely disappointed” to be learning only Tuesday — 12 days after the leak — about the presence of PPH in the tank that leaked. (source)

Residents can take heart, though. Daniel Horowitz, managing director of the US Chemical Safety Board says that the MSDS provided by the ever-so-credible Freedom Industries reports that PPH ”has low oral toxicity.”

Reports on safety are conflicting

Local store shelves were quickly cleared of water after reports of the initial chemical spill came to light and many in the area who were unprepared are left to rely on the good graces of FEMA and being forced to accept the conflicting reports of water safety. Authorities said that the water was safe in some areas, but cautioned pregnant women to avoid consuming it, leaving many to ask, “If it isn’t safe for a pregnant woman, how can it be safe for my children?”

Home water filtration systems can remove some, but not all, of the chemicals. The plume of pollution has reached other states via the Ohio River.

A reader who lives in the vicinity reported after the water was declared safe that he believed this was absolutely not true. He wrote, “I have first hand knowledge this water is not safe. For one, it smells very strongly of licorice. It has an off color; a blue hue. I will never drink it again. I felt it was probably ok to bathe in but that was a mistake too. After flushing my system per the water companies specs, I took a shower. My eyes burned for 4 hours post shower. Many other posts on Facebook and Twitter have complained of the same ailment along with rashes.”

The governor’s office is downplaying the reports of skin irritation, comparing it to a minor sunburn. West Virginia Governor Earl Ray Tomblin’s office addressed the concern in a rather condescending Q&A:

We’ve been monitoring everyone who has presented to the hospital, and what they’ve been complaining of is not a burn like you and I would think of as a burn. Some doctors have described it as a “solar burn” which is similar to a sunburn. Basically, it’s red skin. Everyone has different sensitivities and as we move through the flushing process, sediment has been stirred up from your hot water tank and the pipes.

Some sediment may be coming through the shower that you don’t even see.

Because everyone has different sensitivities, some may be experiencing this and some may not.

These are topical only. They’re short-lived. They are easily treated with over-the-counter products. I would advise anybody who is seeing this type of reaction to speak with your physician. They won’t last. Once things settle down, these symptoms will go away. (source)

“To dismiss the people’s reactions, as nothing more than as sunburn is reckless,” Brockovich said in a post other office’s Facebook page on Sunday. “We are not lab rats. You do not know nor should you try to convince the people that what they see, what they feel and what they experience isn’t real, in order to cover your own (expletive)! How dismissive, and the people suffer because of agency and political decision that were inappropriate, which resulted in delivering them tainted water!” (source)

Everything about this disaster reeks of cover-up. From the ambiguous all-clear on the tap water to the announcement of this second chemical tainting the water to the official down-playing of symptoms affecting people, the only thing that seems beyond doubt to me is this:

The “officials” cannot be trusted.

In their desire to prevent “a panic” they will issue platitudes, sneak around, take shortcuts, and flat-out lie.

Whether they say that the water safe or not, please use your discretion – if it smells funny or tastes off, don’t use it! Personally, I would be reluctant to use this water for any purpose. When money and public image are involved, we must always question which interests will be put first by those in authority. And generally speaking, the interests of the public are not the priority.

Many thanks to David for the eye-witness updates. Our thoughts and prayers are with you and your neighbors.

Contributed by Daisy Luther of The Organic Prepper.