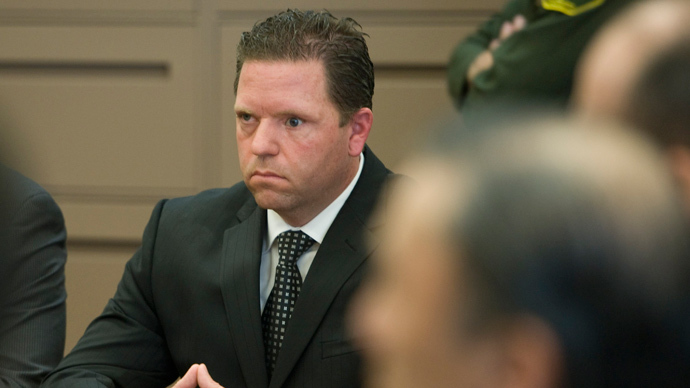 Jay Cicinelli, the former Fullerton police officer who was caught on camera brutally beating Kelly Thomas, a homeless man with schizophrenia, wants his job back.

Cicinelli was found not guilty involuntary manslaughter and excessive force in the death of Kelly Thomas. He told the Orange County Register he wants to return to his former job and will take the legal steps necessary to try to make that happen:

“I was wrongfully terminated. How do you argue with a jury of 12 who all agree on the same thing?” he said. “They sat through the whole trial and heard all the facts.

“I just have to see where this takes me,” he said. “It’s like starting over. … My whole life has been stopped.”

YOUR life has been stopped? What about the life of Kelly Thomas?

He was fired in July 2012, about a year after the July 5, 2011 confrontation that resulted in Kelly’s death.

Cicinelli told the Orange County Register that he has not had an income since being terminated, but as RT.com reports, he has been receiving nearly $40,000 from the city of Los Angeles ever since being blinded in the line of duty 18 years ago.

Police Chief Dan Hughes has said many times that he will fight to to keep Cicinelli from regaining employment with the department, but that decision is not up to him. First, Cicinelli will have to make his case to an arbitrator who would make a recommendation to the city. City council members would then vote on whether to rehire him. If the arbitration process falls apart, Cicinelli said he may take legal action.