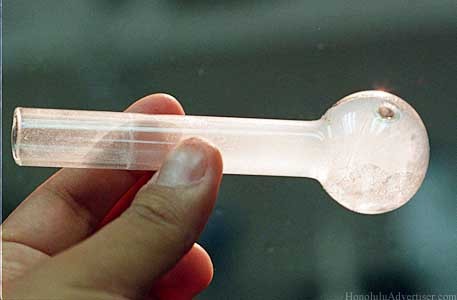 This is the thinking of the left in this country. In order to save people from the unfortunate and degrading death that may come from AIDS, let’s give them free crack pipes and let them kill themselves naturally — by smoking themselves to death. What?

There is talk coming out of San Francisco that this may be launched on a small scale, even if the local government refuses to get behind it. Before you dismiss this story totally, let’s go back to 2010 because San Francisco would not be the first U.S. city to try this experiment. Seattle already has:

For more than 20 years, local heroin addicts have relied on a collection of needle exchanges for clean works. But in recent months, crack users too have quietly found an outlet in the city.

In a nondescript alley in the University District, users can pick up clean crack pipes, pipe filters and ascorbic acid for injecting crack. Heroin users can also pick up a drug that reverses a heroin overdose — an apparent first for a city needle exchange.

“We take a different philosophy approach than most government institutions or public health departments. They have a budget, and have to pick and choose who they’re going to help,” said Shilo Murphy, executive director of the non-profit People’s Harm Reduction Alliance, which runs the U-District needle exchange.

Public health officials know of no other local program that gives out crack kits or Naloxone, the heroin-overdose reversal drug. But they see the potential benefits.

It would seem that a line in the sand would have been drawn somewhere. Has the free needles for junkies program been so successful that we have to expand it? Did they give away so many free condoms that they are venturing into crack pipes? Maybe so.

How do you measure success of a program like this? Once again, if you extend the life of a crack addict by shielding them from the horrors of HIV, what have you really accomplished? I’m not a liberal, but wouldn’t your money be more well spent by educating these drug addicts and trying to get them off the pipe?

What seems to be common sense to me is rejected as nothing but bigotry by some. Asking questions like that will get you labeled as a racist in this America. I’m not sure why. I just know that whenever I disagree with liberals I am usually called a racist.

OK, so back to San Francisco… Free crack pipes? My biggest hope is that this is enough incentive to get all of the crack heads to move west but it’s probably not. Crack pipes are cheap for starters and most crackheads have pawned their TVs and computers long ago to buy more crack. Advertising this deal will be tough.

Maybe a spokesman like the Toronto crack-smoking Mayor, Rob Ford, would help. Then again, maybe putting crack heads into political office is their benchmark for success. Is that why they say this has been successful in Canada? Because there are crack heads in office now? If that is the gold standard then I would suspect this program has had some success here as well.

I don’t understand what is happening in this world, but if you can tell me that evil has not taken over this country I will laugh in your face. Some people seem to have selective memory loss but this country is in a downward spiral that is beyond unbelievable.

Where I come from being in possession of a crack pipe is probably enough to get you arrested. There are drug paraphernalia laws here. But evidently not in places like Seattle and San Francisco.

This is the change that we were promised, but not the hope that we grew up with.