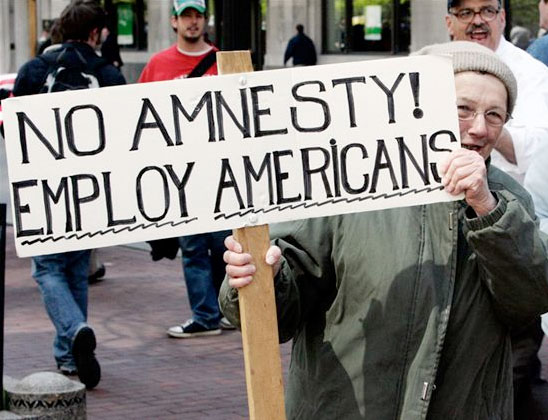 First, let’s look at some statistics from 2013.

The ‘employment’ situation here in the U.S.

This is the official unemployment rate, which is the proportion of the civilian labor force that is unemployed but actively seeking employment.

The U6 unemployment rate counts not only people without work seeking full-time employment (the more familiar U-3 rate), but also counts “marginally attached workers and those working part-time for economic reasons.” Note that some of these part-time workers counted as employed by U-3 could be working as little as an hour a week. And the “marginally attached workers” include those who have gotten discouraged and stopped looking, but still want to work. The age considered for this calculation is 16 years and over.

Currently, close to 92 million people have dropped out of the labor force – the highest number since 1978.

Does this sound like a healthy economy to you?  Does it sound like we need to make jobs for illegal immigrants when we have so many unemployed and living in or close to the poverty level here already?  No? Well, here’s how the President and Congress show their allegiance to the American people:

At the President’s State of the Union address, February 12th, 2013, in a joint session of Congress, seated in the audience were several illegal immigrants,  invited guests of  Rep. Luis Gutierrez (D/Ill.) and Rep. Marc Veasey (D/TX).  One can only wonder just how illegal immigrants were allowed inside one of the most secure buildings in Washington (at just about the same time it was closed to U.S. citizens).  If you don’t have a Congressional ID, then  your name, social security number, date and place of birth must be provided. Question:  Were these items provided and does anyone besides me wonder how ‘legal’ this is? Don’t we have a law about harboring criminals?  Oh, yes, those who come across our borders illegally ARE criminals.

How about this little tidbit:

According to an article in the Weekly Standard last June 2013, encased in the Senate’s Immigration Bill, 68 Senators (bipartisan) voted to create incentives for employers to hire amnestied immigrants over U.S. citizens. Yes, that bill would give employers a financial incentive to employ “registered provisional immigrants” instead of U.S. citizens.  I wrote about this in a previous article but the essence of it is this:  since employers with over 50 employees would be fined if they did not offer them insurance (under the ACA), and since newly legalized immigrants aren’t eligible for subsidies under the ACA until they actually become citizens, businesses could avoid fines by hiring the new immigrants instead.  This is – your Congress at work for you!

Among other entities joining this campaign are Intel (a high tech company),  Marriott and AT&T who are urging Congress to grant immigration reform so they can hire cheap labor from outside the United States.

The House GOP is geared to release “principles” on immigration reform by the end of January while two House Democrats have proposed a bill that would force the federal government to read detained illegal immigrants their rights.  (What rights?)

May I also remind everyone that the President has already allowed a version of the “Dream Act” to exist by giving “prosecutorial discretion” to John Morton, Director of U.S. Immigration and Customs Enforcement.   In not quite the same breath, but close, the Obama administration is opposing the legitimately sought asylum for the Romeikes, a homeschooling family from Germany who will lose their children if they are forced to return to Germany.  That case is now in the Supreme Court but somehow, I don’t have too much confidence in the Nine at this point.

But, there are some in Congress who try to look out for us, their ‘employers’, such as the 16 House Republicans who forwarded a letter to President Obama “demanding” he get the unemployed back to work before granting amnesty to illegal aliens or bringing unprecedented levels of new immigrants to take jobs away from American workers.  (see http://www.breitbart.com)  I might add that none of them are from the state I live in – Virginia.

A recent Gallup poll showed that only 3% of Americans rank Immigration reform as top priority.  But, let me remind you that when it came to the proposed healthcare law which we, the people, were very opposed to they (the President and his Democrat dominated Congress) didn’t pay any attention to the American people then either and we all know how well that is going.

If you are not in favor of immigration until we get our economy moving and jobs are available to legal citizens, current immigration laws are enforced and our borders are secured,  then you really need to keep the phone lines ringing off the hook and email boxes full to overflowing  of  your Senators and Representatives and letting them know because the House is getting ready to tackle that agenda soon.

So, now to my question – what price must the American people pay for amnesty?  Anyone?

Grace Beau is the Editor of American Patriot.