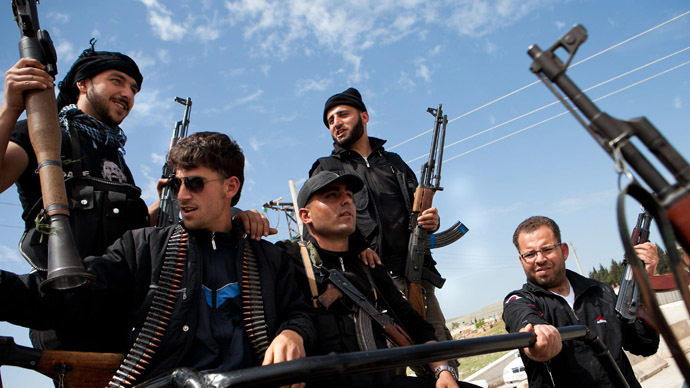 It’s 3AM and I’m so angry I am literally shaking. Don’t expect any unbiased reporting on my part this morning.

Congress just made a move to OFFICIALLY arm Syrian Rebels, totally against the will of the American people, and I am furious. This can not go without a response. I will not defend any of the pretty boy Tea Party heartthrobs who constantly promise that they have our backs. I will defend no one.

Our congress has reportedly “secretly” approved an arms package for “moderate” Syrian Rebels and the American people had better wake up now.

The way I see it, our lawmakers made a decision that they know the American people do not support. They have funded the enemy. They can throw around the “moderate” term all they want but according to Christian leaders in Syria there is no such thing. These guns will find their way into the hands of al Qaeda and those idiots will be coming for us next.

We may never know how any of them voted which makes it even worse.

I see the vote as unanimous. Why? Because even if any of them conscientiously voted against this, the bottom line is that none of them had the guts to open their mouths and let us know what was happening.

WASHINGTON — Light arms supplied by the United States are flowing to “moderate” Syrian rebel factions in the south of the country and U.S. funding for months of further deliveries has been approved by Congress, according U.S. and European security officials.

The weapons, most of which are moving to non-Islamist Syrian rebels via Jordan, include a variety of small arms, as well as some more powerful weapons, such as anti-tank rockets.

What is a “non-Islamist” Syrian rebel? Daniel Greenfield is better qualified to answer that question than I am:

The moderate Syrian rebels, like the Easter Bunny and the Tooth Fairy, are a myth; an imaginary character used to tell soothing stories to children. Unfortunately the storytellers think that we’re the children.

The Syrian Civil War is a religious war. It’s not a war over democracy or freedom. It’s a conflict between two totalitarian systems, one loosely based on a mixture of Islam and Socialism, and the other more rigidly based on Islam. Both are brutal and merciless to anyone who doesn’t belong. Both have their death squads and extensive corruption on the inside.

I think the most telling fact of what has transpired is the way that Congress has gone about making this happen. We hear complaints of Barack Obama wanting to force his will on the people by bypassing congress. It is no secret that he has been threatening more use of executive orders for the remainder of his term.

I can’t say that Obama acting against congress is any more tyrannical than congress acting against the American people. The New York Times/Reuters report goes on to state, “Congress approved funding for weapons deliveries to the Syrian rebels in classified sections of defense appropriations legislation, two sources familiar with the matter said. It was not clear when the funding was approved, but unclassified defense funding passed Congress in late December.”

Is anyone else just a little sick to their stomach right about now?

They want to hide behind classified information and think we won’t find out about it?

I just want to know when Americans are going to get angry enough to do something about it. I have been a bit shell shocked over the last month or so because one of the biggest stories in American history has already broken and everyone seems to be letting it roll like water off a ducks back. This is a related story and you need to understand that our federal government will do ANYTHING they can to support Saudi Arabia.

On December 17th we (and pretty much every alternative publication in America) reported:

The bottom line is that those 9/11 attacks that killed 3000 Americans, and thousands more in war zones overseas, were funded by Saudi Arabia.

Thousands upon thousands of people all over the world died for a lie.

And once again we find that whatever Saudi Arabia wants we will surely try to provide.

Michael Snyder reported back in August that Saudi Arabia was ready and willing to finance this war in Syria:

The party that stands to benefit the most is Saudi Arabia, and they won’t even be doing any of the fighting.  They have been pouring billions of dollars into the conflict in Syria, but so far they have not been successful in their attempts to overthrow the Assad regime.  Now the Saudis are trying to play their trump card – the U.S. military.  If the Saudis are successful, they will get to pit the two greatest long-term strategic enemies of Sunni Islam against each other – the U.S. and Israel on one side and Shia Islam on the other.  In such a scenario, the more damage that both sides do to each other the happier the Sunnis will be.

There would be other winners from a U.S. war with Syria as well.  For example, it is well-known that Qatar wants to run a natural gas pipeline out of the Persian Gulf, through Syria and into Europe.  That is why Qatar has also been pouring billions of dollars into the civil war in Syria.

So if it is really Saudi Arabia and Qatar that want to overthrow the Assad regime, why does the United States have to do the fighting?

Someone should ask Barack Obama why it is necessary for the U.S. military to do the dirty work of his Sunni Muslim friends.

We all remember how the American people, and many of our nation’s finest, raised hell when Obama tried to get us into this war. This doesn’t make Obama and company look good with their Saudi friends. I mean… Come on Barack, who is the King over there?

So they found their back door, as they always do. And for any of you who remember those legislators who were standing up and acting like they were on the side of the American people, maybe this should be a lesson to you.

Where the hell are those guys now?

They were just hoping to keep quiet and that we wouldn’t find out.

We can not stand for this anymore. Try to vote them all out if you think that will work. There are reinforcements waiting who are just as corrupt as these men and women who were trusted to represent us.

They piss all over everything that once made this country great and it is high time that someone started pissing back.

Do you really think there is a big difference between democrats and republicans? Folks that is largely an illusion that keeps the people divided. There is a reason that I call myself a conservative but not a republican. They give us more evidence every day that they are the same party. We call them the ruling class.

How does it make you feel that your government is doing everything it can to infringe upon your second amendment rights while spending your tax dollars to arm Islamist rebels?

It’s going to take men and women of great courage if we are to change this. Otherwise it will keep happening and it is our fault if we allow it.