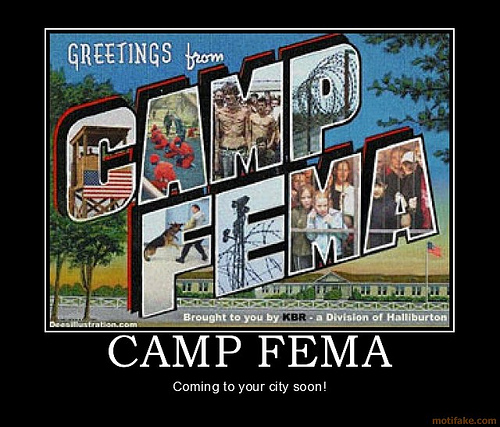 Less than two weeks ago, FEMA was seeking contractors who could supply biohazard disposal facilities, tarps and housing units. They have also recently been on the look out for companies who are able to provide food and drinks on a grand scale, presumably to the displaced who are living under the tarps or in the housing units.

Moving on a little, they have now realized they have no way to get all the displaced/forcibly removed people from their homes to the  housing units, so they are looking for transport companies willing to work on an indefinite time-scale, indefinite quantity basis, to facilitate possible large scale evacuations.

a. This is a solicitation for a single indefinite-delivery, indefinite-quantity (IDIQ) contract to obtain evacuation planning and operational support to facilitate a motor coach evacuation of the general population in response to Presidential-Declared Emergencies and Major Disasters within the continental United States.

You can read the full request here.

In August of 2013, Janet Napolitano stated that she thought a major cyber attack against the US was coming. She also stated that THERE WOULD BE a major natural disaster affecting the people of the United States. How could she know that?

“A natural disaster – the likes of which the nation has never seen – is also likely on it’s way.”

So, since Big Sis made these comments, FEMA has solicited/or purchased:

Whatever it is…it’s getting closer.