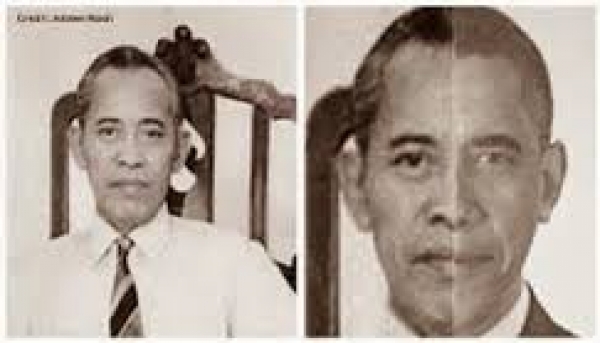 Yesterday, my friend, fellow conservative political blogger, and radio co-host Craig Andresen wrote in his blog ‘The National Patriot’ (http://www.thenationalpatriot.com) an article about whom he believes is Obama’s true daddy. He and I discussed this in detail and I must concur that I too believe that R.M. Muhammad Subuh Sumohadiwidjojo…the founder of the international spiritual movement begun in Indonesia in the 1920s…is the true father of Barack HUSSEIN Obama.

Now you all know I am NO conspiracy theorist…I poo-poo most of them as either the rantings of vivid imaginations or plants by the far left to make we conservatives look foolish, but when there are documented pictures to back up what one is saying it does have to give you pause to think…and when I was sent the pictures of Sudah even before Craig put his fingers to the computer keys, it did start the wheels turning for me as well.

Craig has laid out the case for Sudah being Obama’s daddy quite well but I want to expand on it a bit just for additional clarification and to lay the case NOT for proving Sudah is his father but for Obama and his people having to prove that he is NOT.

Next, we all must accept the fact that Barack HUSSEIN Obama is NOT black. The four scientific racial classifications are Caucasian, Negroid, Asian/Oriental, and bi-racial/mixed race…and that is fact. And while Obama, NO matter who his daddy is, does have some Negroid blood (black) in him…his mother while white did have one very distant black family relation…this still makes him bi/racial/mixed race NO matter how much he screams of being a black man…simple fact, he is NOT. I can claim that lily-white me is black until the cows come home but the racial percentages of my genetic make-up speak the truth about what my race is…and the same goes for Obama. 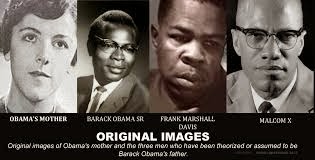 Now let’s run through the list of daddy suspects…the one listed on his birth certificate…on all the phonies that we’ve seen that is, is Barack HUSSEIN Obama Sr., a Kenyan black man. But when you compare photographs of father and supposed son they look NOTHING alike…NOT one iota do they resemble each other. Some others have said Obama is the son of Frank Marshall, and while there is a fleeting resemblance there is NOT enough to prove he is his father by any means. And the same goes for Malcolm X who he resembles even more, but resembling someone is NOT proof of anything for those resembling others is a common occurrence. Think of all the people you know who look like other people you know or even look like so-called ‘celebrities’…it’s just NOT enough to prove anything…in fact without genetic proof …without DNA proof…it’s quite laughable. 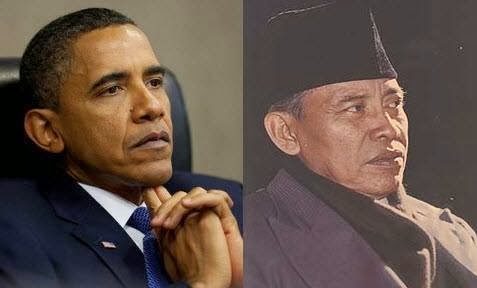 Now when you look at the pictures of Sudah, the resemblance is uncanny…from the bone structure, to the skin color, to the facial features, to the ears (and Obama has ‘distinctive’ ears as does Sudah), to the freckles across the bridge of his nose and face, to the fold lines by his mouth, to his build…to everything. This resemblance is beyond superficial or fleeting…it borders on identical. And Craig has laid out the chain of events that did bring Ann Dunham and Sudah together quite well so I won’t rehash that, but I will say that it lays out the very strong possibility that Sudah is indeed Barack HUSSEIN Obama’s father.

And while some will say that Obama has kinky hair NOT the straight Indonesian hair Sudah has so how can he be Indonesian…well NO one has said either Obama or Sudah didn’t have any black in them. Many Indonesians have black blood in the ancestry and being that Obama’s mother had one very distant black relation, the black gene would be recessive but with the recessive gene determining the texture of one’s hair, it still can show-up any time down the ancestral line…as was the case with Obama.. 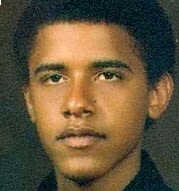 So with that settled, now let’s fast forward to when Obama came back to America as a pre-teen to live with his grandparents in Hawaii. This time frame puts him right at the time when black pride was the movement dejour. It was cool to be black. LBJs ‘Great Society’ was in full force. Affirmative Action was opening doors to blacks that used to be closed. Blacks were getting into colleges once forbidden to them as well as starting to rise in corporate America. Motown was still going strong with black entertainers everywhere and certain sports were starting to be dominated by blacks. And in the middle of all this sits Barack HUSSEIN Obama…a boy becoming a teenager whose mother was white and whose father…or so he believed…was black.

Poor Barry…and he was still Barry back then…was torn…was he white…was he black…what was he…where did he fit in. And so formed his racist persona built upon his anger that he wasn’t light enough to pass for white (an anger he still carries with him to this day) and knowing he really was NOT dark enough to pass unquestionably for being black in this new age of black pride. But he knew he could pass for being a light-skinned black and by being black of any shade he could ‘cash-in,’ so to speak, on all the perks now afforded to blacks….hmmm…

And so the persona of light-skinned black Barack HUSSEIN Obama was born. He went to college by being black…he started his career (if you call being a community organizer a career) by being black…and he got involved with white radicals (like Bill Ayers) who fed on and used the collective black guilt trip to their advantage to push their socialist/communist beliefs. And Barack was ripe for molding, especially coming from a family who already embraced the communist ideology. 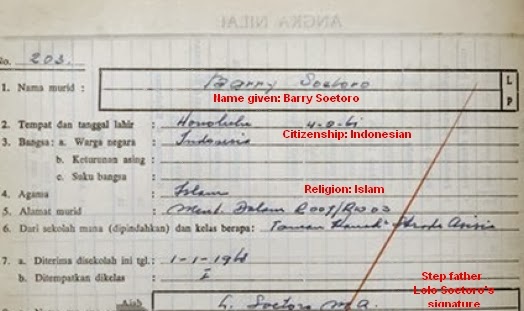 As laid out in Craig’s article, Barack HUSSEIN Obama was indeed born in Indonesia and his Indonesian muslim background and life…a life he lived as a young boy which included going to madras schools (which you had to be muslim and an Indonesian citizen to attend)…was deep-rooted in him and remains so to this day for NO true Christian…as he claims to be….would dare to sit in Jeremiah Wright’s G-D America church for 20 years. And NO true Christian would ever say, “the most beautiful sound in the world was the Muslim call to prayer.”

And when you add in the fact that Barack HUSSEIN Obama never renounced his Indonesian citizenship (and his traveling on an Indonesian passport is proof of said citizenship) nor has he ever became a naturalized American…at least NO papers that we know of exist to that effect…and he would need those papers as his mother age at the time of his birth would NOT allow her to pass citizenship onto him. The only thing that would settle this conundrum once and for all would be a DNA test…and that is something we know Obama will NOT do for he dares NOT have the truth come out about his true lineage or citizenship.

So while Sudah is long dead, some of his children and grandchildren are very much alive and even getting DNA from one side helps get to the truth. And then it’s up to Obama to prove that truth is wrong.

And so for now these pictures will have speak the truth for sometimes pictures do indeed speak louder than any words ever can…and more and more people are now finding that out.