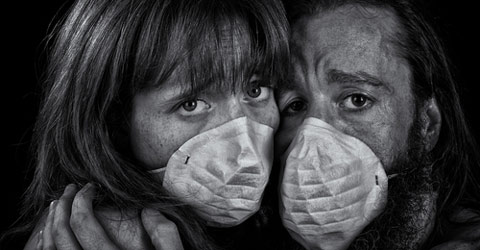 The avian flu virus, which up until last year infected poultry exclusively, has now mutated and crossed over to humans.

What’s even scarier is the fact that the Chinese have been unable to contain the novel H7N9 strain of the virus and health officials the world over are getting ready for the worst. It’s spreading and we now have confirmation that the virus has begun appearing in other countries.

On Thursday, billions of Chinese will be on the move to celebrate the Lunar New Year, creating ripe conditions for the spread of the influenza virus from those already infected. And many of those celebrations will include chickens, the primary carriers of H7N9. In addition, with the Winter Olympics, one of the world’s largest sporting events, just two weeks away, the virus could find the ideal conditions for breaking out.

“We are all connected by the food we eat, the water the drink and the air we breathe.”

But that’s not the worst of it. Last year the World Health Organization warned that H7N9 is one of the most lethal influenza strains ever identified.

Of the nearly 250 officially confirmed reports of human infection since last year, a quarter of those infected have died.

Those are the official numbers, but it is likely that the number of active infections could be a hundred-fold (or more) higher.

Moreover, like any flu virus, H7N9 continues to mutate and scientists recently suggested that all it would take for this particular strain to become a deadly global pandemic is an increase in its transmission rate.

It was initially thought that the virus only spread through human contact with poultry, but that theory was quickly turned on its head when a team of researchers at the University of Hong Kong confirmed that the virus had gone airborne.

If H7N9 mutates to transmission rates of other flu viruses, which is certainly a possibility, then we could well be looking at a mass global pandemic – and according to WHO the H7N9 is mutating eight (8) times faster than a typical flu virus.

To put this in perspective, the 1918 Spanish Flu infected as many as half a billion people (about a quarter of the world’s population). The mortality rate was somewhere in the area of 5% to 10%, with a final death toll of around 50 million people.

At a 25% mortality rate the H7N9 avlian flu, combined with modern transportation systems and metropolitan areas housing tens of millions of people, there is serious potential for a globally significant catastrophe.

Should this virus increase its transmission rate we could be looking at a scenario where a billion or more people contract the virus around the world.

The math is straight forward. One in four will perish.

While we’ve had pandemic scares in the recent past, this one really has researchers and global health officials spooked:

The fast mutation makes the virus’ evolutionary development very hard to predict. “We don’t know whether it will evolve into something harmless or dangerous,” He said. “Our samples are too limited. But the authorities should definitely be alarmed and get prepared for the worst-case scenario.”

As of yet, there is no available vaccine, and one novel mechanism of action for H7N9 is that as soon as it infects its host it develops rapid antiviral resistance, so traditional medicines like Tamiflu don’t work.

One infected student at a local school, or a restaurant worker, or a passenger on an airplane could take this to the next level.

And once it takes hold, there will be no stopping it.

Most don’t believe it is possible with our advanced sciences and research facilities.

The only steps one can take is to be ready in advance with a Pandemic Preparedness Plan, as recommended by Tess Pennington:

When an outbreak occurs, many will remain in a state of denial about any approaching epidemics. Simply put, most people believe themselves to be invincible to negative situations and do not like the idea change of any kind.

In addition to remaining isolated from the general population, you must have (in advance) access to food, water, medicine, and self defense armaments.

If such a virus were to spread, infecting millions and killing off 25% of those who contract it, you can be assured of widespread panic as the unprepared search and fight for resources.