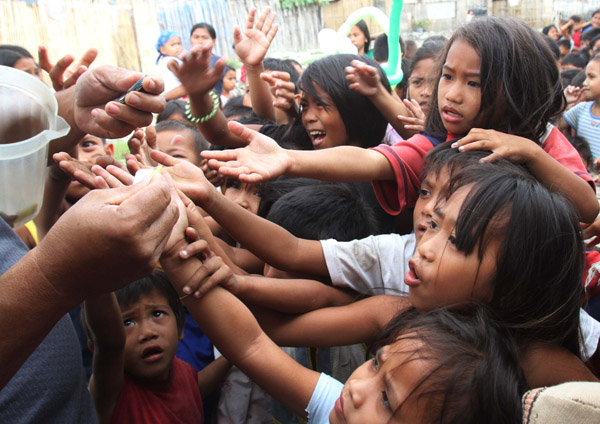 Will the UN explain to these kids why  biodiversity is more important than them going to bed hungry? Image:Reuters

The United Nations is at it again. This time it’s agriculture they are planning to exert more control over. The headline at their news center is:

If demand for new land on which to grow food continues at the current rate, by 2050, high-end estimates are that an area nearly the size of Brazil could be ruined, with vital forests, savannahs and grassland lost, the United Nations today warned in a new report.

Ruined? Really? I like the next bit, ‘vital forests, savannahs and grasslands’. Well forgive me, but I actually regard food growing as pretty vital. Do you think it’s vital or am I just a nut job?

I would love to live in a world where all animals, plants and humans could live in harmony…but we don’t. I am a huge animal lover but if it’s a choice between some wild critter keeping his home or a few hundred people getting fed, the critter loses. Sorry but I am being honest. Yes it will be sad that the grandchildren can only see the animal via pictures in books but hey, at least their counterparts half a world away are going to bed with food in their bellies.

Among its recommendations, the report pushes for measures that improve land management and land use planning, investment in restoration of degraded land, and a reduction in food waste and shift towards more vegetable diets.

I can live with some of that, making the best use of what you have is always good. The vegetable diet raises an issue though.

What about hypocobalaminemia? Vitamin B12 deficiency. This disease is already far too common in developing countries where vegetable diets are the norm.

There is no vegetable or fruit that provides B12. Plants simply do not make B12.

Lack of B12 causes very gradual brain deterioration, which shows as fatigue, memory loss and depression. Over a period of years psychosis and mania may develop.

The deterioration and damage is irreversible, and the condition is thought to account for a high number of the brain-damaged children in the developing world.

Children need far more B12 than adults as they are growing so rapidly. Breast fed babies can become seriously deficient even if their mother only has a mild deficiency.

B12 is found in the following foods:

The UN has said for years that the number of cattle on the planet needs to be drastically reduced, mainly due to the methane they produce contributing to global warming, and the amount of feed they require per pound of meat produced.

They have wanted to herd us…no pun intended, toward a vegetarian diet for at least a decade in their quest for global sustainability. Reducing the amount of cattle cuts the meat and dairy availability for all…except the global elite, who can afford such luxuries in the new sustainable world. Okay that leaves chickens, for now, but the massive increase in the number of avian flu viruses may even make chicken an unaffordable luxury when most of them have been culled to prevent the next pandemic.

You have to ask why, if sustainability is the name of the game, are tens of thousands of people all over the United States thwarted in their efforts to grow their own food?

Why are we prevented from storing rainwater to irrigate our home grown food?

I’ll bet you a dollar to a donut they never mentioned that at Davos where the report was aired last week.

Of course the United Nations News website only prints edited highlights of the report. There are more here. The bottom line is simple to spot though. Humans and their need for food take second place to critters and all other forms of biodiversity

Their decrees and resolutions are nothing more than a thinly veiled attempt to step up their Agenda 21 program. Humans are in the way. We are getting pushed into smaller and smaller geographical areas and living in smaller and smaller spaces within those areas.

By limiting the land available for food growing, and by deciding what we can and cannot eat, the United Nations and her allies, the governments of the western world, are backing us into a corner which could prove all but impossible to get out of.

Food and water are methods of control, and it has been used as such for thousands of years in one way or another.

Are we approaching the time when food will be doled out to the good little sheep and withheld from the baaaad sheep? It wouldn’t surprise me one little bit.

Preparedness, as most in The Daily Sheeple community know, is the way of the future. It is the only way us bad sheep will be fed as our views and opinions mark us out as people to be watched, people to be wary of in times of trouble. We are the people who will not be backed into a corner, because we have no need for the government and its hand outs.

Get ready, it’s going to be a hell of a ride and I think the roller coaster is going to start rolling a lot sooner than we anticipated.