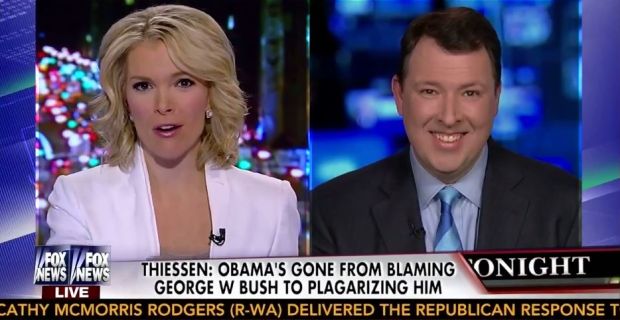 Barack Obama plagiarized portions of his State of the Union speech from George W. Bush’s 2007 address, according to former Bush speechwriter Marc Thiessen.

The similarities underscore the point that no matter which party is in power, Americans are forced to endure the same empty rhetoric on an annual basis.

Noting how the two speeches were “eerily familiar,” Thiessen pointed to some examples.

Politico’s Dylan Byers added that although Obama didn’t lift any lines directly from Bush’s 2007 speech, the repeated use of the word “opportunity” was an integral characteristic of both speeches, while both also ended with an emotional narrative about a wounded veteran.

As we reported earlier, a CNN poll found that reaction to Obama’s State of the Union speech was the least favorable since he took office.