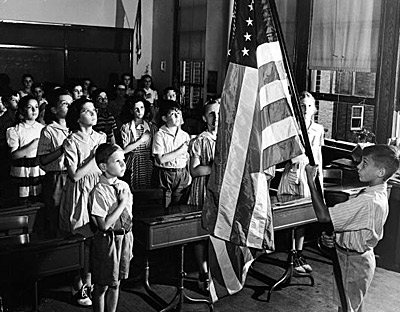 We began each day with the Lord’s Prayer, standing quietly with bowed head, hands clasped in reverent respect. It’s a Christian prayer, of course, but back then the US was largely a Christian nation. Wait a second! We still are a Christian nation, no matter what the anticlerical, atheistic wing of the Liberal Social Democrats say. In any case, The Lord’s Prayer is about as generic a prayer as one can find in the Christian liturgy and, said in the classroom in those days, it was meant to be broad-minded in the way America was broad-minded, open and welcoming. In fact, I believe that in almost every public school class room in the US back in those days of the early 50s, students always opened with the Lord’s Prayer and very few people minded it, questioned it or protested it.

Our teacher, in the combined third and fourth grade classroom, was Miss Alice Dufort, a lovely lady in her 40s, who was as gentle and kindhearted as any human being I have ever met. She was what we in those less sensitive days, called an Old Maid, which meant that she had never married. She was a fine, much-honored citizen, for whom teaching was a vocation, a calling and not just a job. It was more, even, than a profession. It was her life’s work and she did it with dedication. Miss Dufort had a regular morning routine through which she led us in orderly fashion. After the Lord’s prayer, we recited the Pledge of Allegiance. She stood, her hand on her heart, and spoke the words with stirring devotion that was infectious and held us rapt.

After the prayer and the pledge, we stood and sang, first the National Anthem, then various patriotic songs by Irving Berlin, George M. Cohan and others. There was You’re a Grand Old Flag, God Bless America and a number of others, four or five in all. We sang them every day. I learned them by heart and, to this day, when I hear them, I am cast back to those days in Miss Dufort’s classroom. After the singing, we sat while she read to us from some of her favorite children’s books. There was one called “Dan’s Boy” about an old man who adopts an orphan And another, whose title escapes me, about a child whose father fought in the Revolutionary War and who hid in a barn from the British while his father joined the ranks of militia men at Bunker Hill. I am from Massachusetts and the Revolutionary War was deeply important to us.

There was another book, too, about some little fellow called the Bee Man of Orne. For the life of me I can’t remember much about the stories in these books, but I remember well Miss Dufort reading them to us with such emotion that it moved us and gave us pleasure. Some stories, the short ones, she read whole, while others she read a chapter a day, like a serial at the movies on Saturday morning.

Only when all of this was done, did she proceed to teach us arithmetic, which she referred to as “number work,” then geography, which for Miss Dufort became the narrator of a running travelogue, which included descriptions of the natural resources and manufactured products of many nations and regions. I remember reading about the textile mills of the Merrimac Valley, the coal fields of West Virginia and the steel mills of Pittsburgh. We studied the geography of other countries, as well. Reading geography with Miss Dufort was like reading an adventure story, because she vivified the dull study of regional products and manufacturing with back stories and side tales she’d learned of people, many of whom she’d actually met, who came from all those exotic places we read about.

We studied history, too. But not only did we read about the French and Indian War, the Revolution, the War of 1812 and the Mexican, Civil and Spanish American wars and the great heroes from those fabled events. We learned about their meaning, because Miss Dufort was a keen observer of the meanings of things. She taught us how to understand the lessons of our country’s gloried history. But she taught us, too, about the terrible times, the sordid periods of slavery and the cruelties that attended it. And she praised Abraham Lincoln for emancipating the slaves and for keeping our nation whole in a time of terrible crisis and division, because we were “one nation conceived in liberty and dedicated to the proposition that all men are created equal.” We read the Gettysburg Address, memorized it and often recited it in our morning routine, along with the prayer, the pledge, the songs and the stories, because it was more than just history. It was a vital part of our makeup as Americans.

Miss Dufort was not alone or unique in imbuing us with the spirit that, as Americans, we were a melting pot of grand scale. It was the essence of our being that the beacon of our nation, its freedom, its joy and its gorgeous plenty, were the magnet of a new civilization that made the individual the focus of rights, initiative and industry, along with personal responsibility to keep the lamp of liberty lit for the world to see. When, on what was then called Armistice Day, we recited In Flanders Fields, we did so knowing with certainty that the dead of that time and of generations before were dedicated to keeping that lamp lit in preserving not our greatness, but our freedom, for therein lay our greatness.

My wife is a teacher now in urban schools. She tells me of her experiences in the classroom and I fall back, agape at the ignorance of so many young people, at the arrogance of their ignorance, and of the outright contempt they too often hold for the great promise that is our country, forged on the anvil of enlightenment, and I long for those old days to return, when children were imbued with the real lessons of America, which seem nowadays not merely lost, but somehow thrown away.