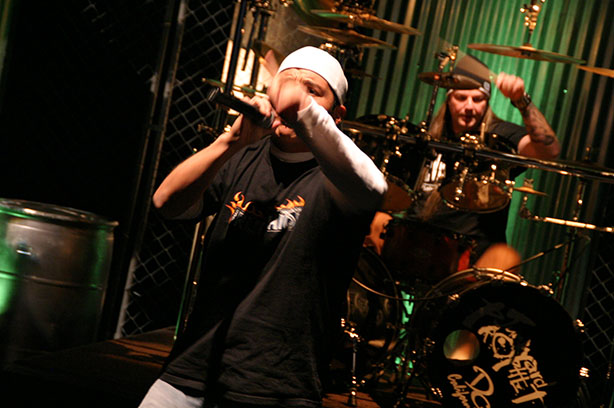 “Let me make the songs of a nation and I care not who makes its laws.”

During a television interview in California last week, I was asked what the people thought of my appearance when doing events across the country, as if to say that the politicians are the standard in conveying the message to bring about resolve to the American people. I responded with, “What, because I am 6’5, have long hair, tattoos and am a drummer for an international band, Junkyard Prophet, and quite studly?” Well … that’s what my wife tells me. Though I am having fun, the question came across as almost in insult to me.

I went on to tell about an experience I had in Washington, D.C., at a conference I was invited to, where an individual asked me what I did for a living. After I told him what I do, he looked down on my profession just like the next generation does that receives my message. I then asked him what his favorite band was. Lo and behold, what came out of his mouth proved my point to a “T.” He started singing and hand jesting as if he were playing guitar to one of those long-haired, tattooed bands that he just thought was so ineffective.

I then stated that if you look at the legislators in this country, they are not residing in executive office or within our House of Representatives; they are not in Congress. The real legislators are those who convey the political message through their music, lyrics and lifestyles. They are the guys and girls that you know of as “rock stars,” “pop stars,” etc.

Look at little Justin Bieber who was recently busted for a D.U.I., as well as being under the influence of anti-depressants and marijuana. His mugshot was of little Justin smiling big as if to say, “Nothing to fear, there will be no consequence for endangering the lives of those who were on the same road I was on. The ‘soft judge’ will just smack me on the hand.”

Are you hearing and seeing this next generation? What is little Justin’s message? His message is do as I do! Go and hang out at strip clubs with your daddy, drink and drive if you want to, disrespect authorities, smoke dope (actually the dope smokes you), fornicate (sex before marriage), and in turn, I ask, what do those who follow little Justin do? The same exact thing they were taught to do. To prove my point, Brian McKnight, an R&B singer, told BANG Showbiz that he believes Justin’s wild antics are a part of a plan to get people even more interested in his music. Of course! To sell his “message.”

What is it that they are conveying through their lifestyles? Lawlessness!

[See related video: The Good Use of a Fool]:

Now let’s go over to some other fools that are willing to channel lawlessness by helping destroy the America we know.

George Harrison of The Beatles stated,

“The main thing is to get the kids … nail you when you are young, brainwash you, then they’ve got you for the rest of your life.” (“Loose talk,” Rolling Stone, 1970)

Again, remember what Plato said, “Let me make the songs of a nation and I care not who makes its laws.”

We can see that America has upped the ante on tempting a Just and Holy God by attempting to advocate on television what God has called, not sin my friends, but an abomination through homosexual marriage. Isn’t it interesting how the homosexuals try to convince the American people that everyone is happy and accepting of their abominable life choices (Deuteronomy 30:19)? In fact, the opposite is true.

Last week we saw Katy Perry at the Grammys with her witchy performance singing a new song, “Dark Horse.” This once self-proclaimed Christian put herself up to be burned at the cross (this is how heretics are martyred). One has to wonder as to what her daddy, who is a preacher, was thinking.

We also saw the little hypocrite, Beyonce, a self-proclaimed Christian, showing the world what she’s got, and all without shame.

Friends, remember, nobody rebuked the religious hypocrites more than Jesus Christ Himself. Jesus said that many would come in His name; and shall deceive many (Matthew 24:5-8).

Jesus’ answer to their hypocrisies was, “Take heed unto yourselves.” Be smart, be wise, be not deceived.

We also saw Madonna, you know, the material girl who seems to be willing to do anything to grab a little attention. She was also recently dressed up like a witch with gold teeth. Why all of the satanic innuendo and immoralities? No wonder Satan, the enemy to the praise and worship of God, means to usurp and instill pride into his lawless ones (Ezekiel 28:12-14).

To say things are getting a little weird is to underestimate the capabilities of man’s fallen nature.

Yet, what we see is those who were willing to fall down to the enemy of their souls and worship him with a whore’s forehead (Matthew 4:9).

America is witnessing the last stages to a civilization that is about ready to fall under major judgment (Leviticus 26 and Deuteronomy 28). John Adams, the second president stated that decadence follows luxury. Decadence is defined as: a show of low morals and a great love of pleasure, money and or fame.

Friends, what are these fools channeling? I will tell you, new legislation.

It is as if someone is trying to push a political message through these musicians. Does it strike you that what these debased individuals are promoting is what the government is attempting to pass as new legislation? They know that the people will never accept it, so they attempt to normalize the crime towards Heaven itself until they do.

“Music is a spiritual thing of its own. You can hypnotize people with music and when you get them at their weakest point, you preach into the sub-conscience what we want to say.” (Life; Oct. 3, 1969, p. 74)

Herein is my point to all of this debasement: These musicians do what is illegal and unlawful on stage, only to promote the next agenda our government attempts to pass as new legislation – i.e., gun control measures, marijuana use, homosexual marriage, underage drinking, satanism, evolution, and fornication. I have to ask, who are the legislators? The musicians or the government? Or are they working hand in glove? It is as if someone behind the scenes is purposing all of this. Friends, this is exactly what they are doing. You need to understand their methodology.

Guitarist Tom Morello of Audio Slave said on Rage TV, “We are able to seduce some people in by the music who then are exposed to a different political message.”

So let me ask you, when Plato said, “Let me make the songs of a nation and I care not who makes its laws,” was he right? Yes he was! And it is these fools that are helping destroy America!