Horror stories abound about hospitals charging people ridiculous sums of money in America for something as cheap and plentiful as an aspirin. This is nothing new, and it’s something that’s sadly just an accepted fact.

Just last month, this guy posted a bill for his appendectomy on Reddit and it went viral. Why?

Because he was charged a stomach-turning $55,000 for the relatively simple procedure — an amount that would’ve likely induced appendicitis if the guy hadn’t already had his appendix taken out.

Overpriced, much? Did that surgery come with foie gras and caviar afterward?

This meme is currently making it’s way around Facebook: 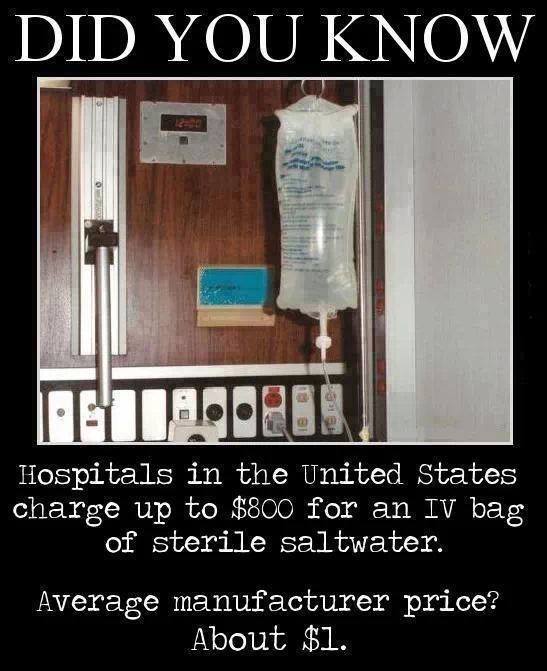 I decided to do a little research to see if this was actually true. After all, approximately 70% of the surface of this planet is covered in water — 97% of which is of the salt variety. Are hospitals really charging Americans up to $800 for one of the most abundant resources on the planet and something that ultimately costs a whole buck to make?

Yes. As a matter of fact, it turns out they are.

Nina Bernstein of The New York Times went in search of the same thing a few months ago, and found that the average intravenous bag of sterile saltwater costs somewhere between 0.44¢ and a whole dollar to produce (based on government figures). Bernstein also noted:

Some of the patients’ bills would later include markups of 100 to 200 times the manufacturer’s price, not counting separate charges for “IV administration.” And on other bills, a bundled charge for “IV therapy” was almost 1,000 times the official cost of the solution.

How can hospitals get away with charging $800 for a bag of saltwater and $25 for a single aspirin? My dad would call that “highway robbery” (like dads do).

Well, apparently it all has to do with our government’s jacked up reimbursement structure:

Public programs do not fully pay for the cost of care. The latest figures estimate that hospitals lose $35 billion a year on Medicare, Medicaid and other forms of government reimbursement. For specific procedures, the picture can be even bleaker.

Take note, because this money isn’t lost – you pay the difference. Unable to absorb these losses, the bill gets passed to commercial insurers and employers that purchase health plans for their employees. Hence the itemized charges of $25 for an aspirin or $100 for diapers that are paid by insurers today, and by you and me tomorrow in the form of higher premiums and co-pays. And it’s only going to get worse as our population ages and more of us call Medicare our insurance provider.

When CBS Sacramento asked the hospital mentioned earlier why it charged $55,000 for a simple appendectomy, they confirmed this to be the case:

[Sutter Health] pointed to California’s uninsured and those on Medi-Cal, saying:

“…we receive less than the actual cost of providing services from the majority of our patients while daily serving scores of other patients who have no ability to pay anything. Sutter Health agrees that an improved billing structure is needed..”

We get mediocre to poor results on life expectancy (26th place), infant mortality (31st), low birth weight (28th), maternal mortality (25th), you name it. It’s been true since the early 1980s, and we keep looking for solutions from within the health care sector itself. (source)

This has been true for decades and yet, we’re still looking for solutions within what is obviously a failed system? (Of course, now we’re in the process of being forced into that failed system via Obamacare.)

So despite spending 2.5 times more than any other country on healthcare per capita — an amount equivalent to 18% of our nation’s GDP — the U.S. is still sitting at 26th in overall life expectancy behind Slovenia…?

Great. Here’s to spending $799 on almost nothing, America!

Now you can see why a Bayer pharmaceuticals CEO would say his company doesn’t make cancer medicines for Indian markets (a developing nation that averages $132 per person spent on healthcare annually versus America’s $8,362), but for ‘Western patients who can afford them‘.