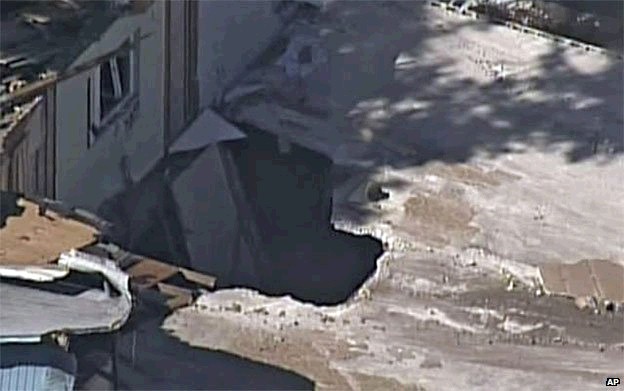 The sink hole that swallowed Jeff Bush while he slept was only visible after demolition of the house started. ( Image AP)

On the night of February 28th 2013 a sink hole opened up under the bedroom of 37 year old Jeff Bush who was asleep in bed. Invisible outside the house, Jeff’s entire bedroom vanished into a gaping chasm, his body has never been found.

So, what’s happening? Why are so many sink holes appearing in Florida?

Millions of years ago the area where Florida is located was a warm shallow sea teeming with marine life. As these sea creatures died they sank to the sea floor and built up in a thick layer to form what we know as limestone. As the rain falls it picks up CO2 which alters the pH balance of the rain making it more acidic, and this acid rain dissolves the limestone, leaving it resembling a huge Swiss cheese, full of holes. This is called karst. The whole state of Florida is a karst region.

There is little groundwater in karst regions, all the water percolates down through the rock. The only groundwater in karst regions is usually where the soil is clay. Much of the gumbo clay in Florida was washed down from the Appalachian Mountains by ancient rivers millennia ago. Geological upheaval caused some ground to rise up, such as the Ocala uplift that runs north to south along West Central Florida.

The rolling hills that mark the Ocala uplift have been weathered and eroded over tens of thousands of years. The clay deposits have dried up, turned to dust and blown away leaving the limestone bedrock much nearer the surface. Sometimes it’s literally no deeper than a foot down below the surface soil. Here, any rain immediately sinks through the soil into the bedrock below, eating away at it as it flows through caves and caverns that have been carved out of the limestone over tens of thousands of years. As you move west, the limestone is buried deeper and deeper, but under the clay there is still weakening of the bedrock from underground rivers and aquifers.

The underground water in the aquifers exerts a pressure on the rock around it. Removing that pressure means that weak sections of the bedrock cannot withstand the weight of the soil, clay, and buildings above it and the ground collapses.

Although some scientists have implied there may be a ‘sink hole season’ for the most part this has been discounted, though the weather certainly plays a part.

In the summer the Gulf Coast is often hit by hurricanes that dump an incredible amount of water as they pass. Although this replenishes the aquifers, it also massively increases the weight of the soil above the bedrock and sometimes the weakened structures just can’t take the extra weight, and the ground gives way, taking everything above with it.

In the dry season the water table lowers, and the change in pressure can cause the bedrock to implode…sucking in everything above it.

Although both scenarios have very different mechanisms, the result is the same.

Sink holes like the one that killed Jeff Bush.

Farming methods are exacerbating the problem. The soil in Florida is ideal for growing citrus fruit, but winter in Florida can be chilly and crops are damaged by frost.

Farmers have taken to pumping up the warmer water from the aquifer to spray the fruit and prevent frost damage. Once again the pressure changes in a short space of time and collapses occur.

Research is ongoing, but it suggests there is a correlation between aggressive water removal and sink holes occurring soon after.

With the entire state sitting above huge caves of weakened limestone, it’s within the realms of possibility to consider that on a geologic timescale of thousands of years, Florida will once again be a warm shallow ocean as the land collapses and the Gulf of Mexico or the Atlantic Ocean moves in to fill the void.