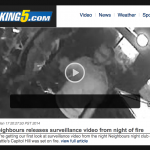 A New Year’s Eve celebration at a packed Seattle gay bar was set ablaze shortly after midnight on January 1.   The staircase at Neighbours, Seattle’s largest and longest running gay nightclub was doused in gasoline and set aflame by Musab Masmari. He was arrested Saturday morning on his way to the airport.

Where are the left-wing, the gay and LGBT organizations denouncing the Islamic texts that inspire such mayhem and murder of gays? Where is that fierce gay leadership condemning Muslim oppression of gays under the sharia?

Where are those brave activists who rushed to condemn me when I ran an ad campaign highlighting Muslim oppression of gays under the sharia?

Gay marriage is their priority? Pathetic.

Gay organizations in America say nothing, but loudly condemned my ad campaign highlighting Muslim oppression of gays under the sharia. Why haven’t we heard from SF City Council, the Human Rights Commission, SFHRC head Theresa Sparks, and the enemedia? They called my ads hate and issued a resolution against my organization for merely quoting Muslim political leaders, spiritual leaders and cultural voices in the Muslim community who call for the torture and death of gay people.

No, instead, I was denounced by gay and transgender leaders in the US for our work to highlight the Muslim oppression of gays. The San Francisco City council issued a resolution condemning our AFDI ad campaign (the first of its kind) focusing on the vicious oppression and subjugation of gays under Islam.

Where are those “human rights” hypocrites now?

“Suspect arrested in arson at Neighbours nightclub,” By Allison Morrow, King 5 News (thanks to Halal Pork Shop via Religion of Peace.com)

Police took Masmari into custody as he was en route to the airport.

Police say following the arrest, Masmari was interviewed by detectives and later booked into the King County Jail for Investigation of Arson.

It was just after midnight on New Year’s Eve while nearly 700 people crammed into Neighbours for a celebration when customers noticed the staircase at the iconic gay club was on fire.

Management at the iconic gay club in Capitol Hill later discovered a gasoline container near the stairs.

No one was injured.

Neighbours released surveillance video that police believe shows Masmari as he walks into the club.

The video was captured around the time of the countdown to midnight on New Year’s Eve. Masmari is carrying something in his hand.

The bar later found a container of gasoline at the top of a staircase. According to SPD, Masmari doused the staircase with fuel and set it on fire.

Detectives worked on the case with the Joint Terrorism Task Force.

A woman who lived next door to Masmari for three years calls him erratic and violent.

“We’re scared of him,” she said. “He yells and throws things.”

She asked not to be identified for fear of retaliation, still horrified by her neighbor’s arrest. She called police several weeks ago when she saw his face in surveillance video on the news.

“I looked at the video and it was clearly him,” she said. “Terrified? Yes.”

“I feel that the streets are a little bit safer tonight,” said Neighbours Spokesman Shaun Knittel. “Why do 750 people have to potentially pay for your ideals, your beliefs, your anger?”

It’s a question that’s haunted Knittel for a month.

Police have not yet released a motive for the arson, but expect more details to surface when Masmari faces a judge for the first time in court.