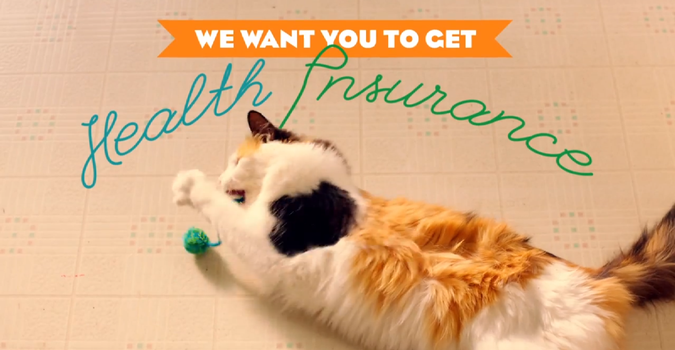 Obamacare advocates have resorted to all kinds of creative ploys in a desperate attempt to get young people enrolled in plans.

First they tried winning over the “young invincibles” with the Pajama Boy ad campaign. Those ads featured a bespectacled 20-something  “insufferable man child” who wanted young folks to wear pajamas, drink hot chocolate, and talk about getting health insurance.

That campaign was a bust. Young people just couldn’t relate to PJ Boy.

Next, advertisers tried something different – and far more brazen – to grab the attention of the 18 – 35 age group. They rolled out a series of racy ads featuring young people doing things like drinking beer and shots, drooling over Ryan Gosling, and thinking about free birth control.

Celebrities have also been recruited to pimp out Ocare to young folks.

The young invincibles remain unimpressed, and some really don’t appreciate being forced to buy something they don’t want or need.

In fact, there is a growing non-compliance movement. People are speaking out and more and more are refusing to comply with the ACA.  Even physicians are are opposing the “law” and many are standing up against the mandates.

Remember – Obummercare has a target of 40% of the 7 million enrollment goal by March 31 to be from those “young invincibles.” So far, only around 25% of those enrolled are in that age group.

Studies have shown that ACA plans are just not a good deal for most young Americans:

The ACA’s perverse economic incentives are well documented. The law makes health insurance more expensive for many young adults, while at the same time making the decision to go without health coverage exponentially less risky than it previously was. It is impossible to predict how many young adults will ultimately enroll in coverage, but it is clear that many young adult enrollees will be worse off financially if they decide to purchase health insurance.

So, what is a desperate administration to do?

Why, use singing pets to  lure you into getting covered!

You see, they’ve pretty much given up on trying to convince young men to enroll.  That’s because they tend to think they are invincible and don’t need insurance. Consumer psychologist Kit Yarrow explained this concept to USA Today:

“Men tend to stay bulletproof in their minds longer than women do. All young people have a sense of invincibility, but women understand earlier than men do that it isn’t true.”

So now, the advertising focus is on young women, because they are more likely to enroll in insurance, and apparently are suckers for adorable singing animals.

Who can resist cute little cats, dogs, birds, and hamsters? Just look at those faces!

Enroll America expects to spend $1.5 million a year on this ad campaign.

President Anne Filipic told USA Today that the cats, dogs, birds and other pets featured in the ads “help break through the clutter” and are sure to resonate with the public. She cited statistics showing more than 60% of homes have a pet and more than half of female pet owners would risk their lives for their pets.

She said the website glitches have dominated the media and the important elements of the law have been lost on consumers:

“There have been challenges in getting messages out,” she says. “People don’t have the facts they need to know.”

Or, the messages have been very clear and young people are very aware of the facts, and that’s why they are opting out of participating in this enormous train wreck.