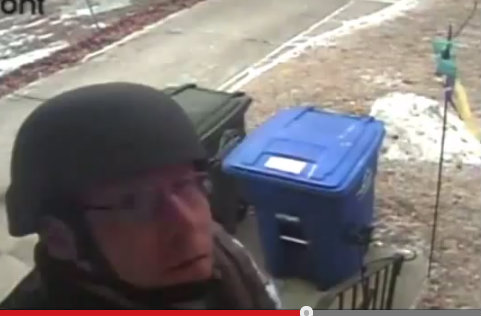 Sometimes on the news, you hear about a horrifying home invasion, during which a stunned family is terrorized at gunpoint by thugs who storm the home, shouting and waving around weapons.

That’s exactly what happened to a family in Des Moines, Iowa the other day, but the thugs who burst in just happened to be wearing police uniforms. They forced open the door with a battering ram, they had ballistic shields, and they were wielding weapons.

They must have been looking for hardened criminals, right?  There must have been a terrible crime committed for them to burst in like that, right?  Truly dangerous characters must have inhabited that home, right?

They launched this attack over credit card fraud.

You read that correctly – lives were put at risk and property was destroyed over credit card fraud in the amount of about $1000.

None of the suspects they were looking for were inside the home that was put under siege, and none of the fraudulently obtained merchandise was present on the property.

Anyone who believes that police departments are not militarized needs only to watch this video to see the ugly truth for themselves.

The police claim to have knocked, but the video shows a different story.

It’s also telling that these fine officers who were “just doing their jobs” ripped out surveillance cameras so that their actions could not be filmed. It’s unfortunate for them that enough footage was available to make this video, which doesn’t really cast them in a benevolent, good-cop light.

Tragedies occur during raids like this. It was only at the last possible moment that legal gun owner and honorably discharged veteran Justin Ross, who was in the bathroom,  realized that the thugs that had invaded his mother’s home were police officers.

“I stood up, I drew my weapon, I started to get myself together to get out the door, I heard someone in the main room say police. I re-holstered my weapon sat back down and put my hands in my lap,” Ross recalls. (source)

Ross already had his weapon unholstered in order to defend his mother  and there had been one kick to the bathroom door, when he heard them shout, “Police.”  It is not a stretch to believe that we’d be hearing about another execution by cop had the officers gained access to the bathroom on the first try and seen Ross with his weapon drawn.  The officer and/or Ross would both potentially be dead.

Not surprisingly, the Ankeny Police Department has had very little to say about the raid that was caught on tape.

Ankeny police spokeswoman Captain Makai Echer says officers consider several factors when deciding whether to send officers similar to a SWAT team to a house to serve a warrant, or simply knock on the door.

In this case, Echer says, officers looked at suspect’s criminal histories and whether there could be firearms in the home.  Of the three suspects that were present in the home, one has a violent arrest record for two assaults about 13-years ago and a domestic assault.

This is the police department of Ankeny, Iowa, and they are proud to protect and serve the hell out of you.