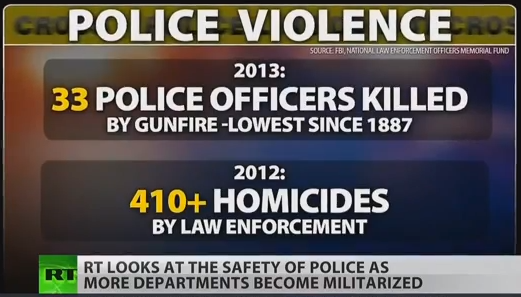 Almost assuredly, corporate media outlets follow that cue. But without a doubt, the family and friends of the police employee’s victim aren’t silenced. And thanks to technology, they’re better positioned to inform others. They stand with a growing number of people who recognize that such misdeeds aren’t isolated. Killers are responsible for their actions, whether or not they don a badge.

There is a clear pattern of double standards being afforded to those with badges by their colleagues in the supposedly truth-seeking criminal justice system. Rather than waste time trying to advance a “reform” or new “leadership” or the creation of a “civilian review board” or the adoption of “bodycams,” one must realize that the default to cover-up, to be corrupt, and heavy-handed, and even for the “good” cops to be silent about the “bad” cops, is inherent in the very structure of the police monopoly. For more, see: http://copblock.org/library

The video below, Police Deaths Down, Police Killings Stay High comes from YouTube.com/RTAmerica and was posted on 2014.01.31. From the video description:

Whenever police officers use deadly force, they rarely face criminal prosecution, and usually claim that they feared for their safety. While a police officer’s job is dangerous, the number of cops killed on duty is at historic lows. Meanwhile, the number of people killed by police officers remains steady. RT’s Ramon Galindo shows us how this trend is devastating families in Southern California.

A few excerpts from the video:

“When law enforcement uses such violent force they usually justify it saying they fear for their safety. But for victim’s families, that explanation doesn’t make any sense.”
-Ramon Galindo

“All they have to do is say I feared for my life, or I feared for the life of somebody in the public. And they’re exonerated… They are not held to the same standards as the general public. They’re just not held accountable.
– Jean Thaxton

“They’re not held accountability. They can do whatever they want.”
– Ron Thomas

Contributed by Pete Eyre of CopBlock.org

Pete Eyre Pete Eyre is co-founder of CopBlock.org. As an advocate of peaceful, consensual interactions, Eyre seeks to inject a message of complete liberty and self-government into the conversation of police accountability. Eyre went to undergrad and grad school for law enforcement, then spent time in DC as an intern at the Cato Institute, a Koch Fellow at the Drug Policy Alliance, Directer of Campus Outreach at the Institute for Humane Studies, Crasher-in-Chief at Bureaucrash, and as a contractor for the Future of Freedom Foundation. He later hit the road as co-founder of the Motorhome Diaries and Liberty On Tour and now calls Keene, in the ‘shire his homebase.