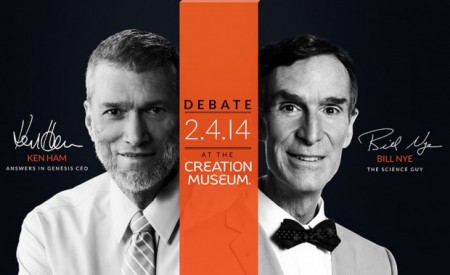 Did you get a chance to see the debate between Ken Ham and Bill Nye “the Science Guy” the other night?  It was definitely entertaining.  Unfortunately, it didn’t do much to clarify the issues that millions of Americans tuned in to learn more about.  In fact, viewers got a lot of information from Bill Nye that simply is not true.  For example, Bill Nye made it sound like science has discovered fossil layers all over the earth that are neatly stacked on top of one another with less evolved creatures in the earlier layers and more advanced creatures in the upper layers.  He also made the incredible claim that you cannot find a single fossil which is in the wrong layer.  This is such an elementary mistake, and exhibits such a complete ignorance of what the fossil record actually shows, that he should have been laughed off the stage.  This is exactly the kind of extreme anti-intellectualism that Nye was supposedly trying to warn people about.  Sadly, our society has been so “dumbed down” that there are lots of people out there that will actually believe him.

During the debate, Bill Nye said that if we could find “just one” fossil that was out of place that we could change the world.

Well, apparently he is either completely ignorant or he purposely told a huge lie to the American people.

According to Dr. Donald Burge, the curator of vertebrate paleontology at the College of Eastern Utah Prehistoric Museum, mammal fossils are found in nearly every dinosaur dig that he has ever been associated with…

“We find mammals in almost all of our [dinosaur dig] sites. These were not noticed years ago … . We have about 20,000 pounds of bentonite clay that has mammal fossils that we are trying to give away to some researcher. It’s not that they are not important, it’s just that you only live once and I specialized in something other than mammals. I specialize in reptiles and dinosaurs.”

By the way, Dr. Burge is an evolutionist.

Not only that, a whole host of modern creatures have been found in “dinosaur rock layers”.  The following is an excerpt from an article by Calvin Smith…

To the surprise of many, ducks,1 squirrels,2 platypus,3beaver-like4 and badger-like5 creatures have all been found in ‘dinosaur-era’ rock layers along with bees, cockroaches, frogs and pine trees. Most people don’t picture a T. rex walking along with a duck flying overhead, but that’s what the so-called ‘dino-era’ fossils would prove!

In fact, a total of 432 different mammal species have been identified in rock layers containing dinosaurs.

So does that mean that mammals have been around for tens of millions of years?

No, what it could mean is that the way that evolutionists have been dating the dinosaurs is fundamentally flawed.

Most people do not realize this, but T-Rex bones have actually been discovered that still contain soft tissue inside of them.

If those bones truly were “millions of years old” that would be impossible.

And carbon dating also provides strong evidence that the evolutionary timeline is seriously messed up.

Due to the rate that it decays, there should be absolutely no measurable radioactive carbon left in any fossils that are “greater than 100,000 years old”.

No matter how much radioactive carbon was there in the first place, it should be completely gone from anything that was once living after 100,000 years.

But we find it in all of the ancient fossils that we dig up that get tested.  We even find it in coal, diamonds and in dinosaur bones.

If the theory of evolution was actually true, there should be millions upon millions of transitional fossils in the rock layers that show the development of one species into another species.

Instead, we find just the opposite.

But don’t take my word for it.  Just check out what one of the most famous evolutionists in the entire world has to say about the matter…

The most famous paleontologist in the world, Harvard’s Stephen Jay Gould, said, “The extreme rarity of transitional forms in the fossil record persists as the trade secret of paleontology.” (Note” “extreme rarity” is Harvard-speak for “nada, zilch, zippo.”)

So what does the fossil record actually show?

It actually contains remarkable evidence for a sudden creation.  The following is an excerpt from a recent article by Bryan Fischer…

What the fossil record teaches us, in contrast to the theory of evolution, is that increasingly complex life forms appear fully formed in the fossil record, just as if they were put there by a Creator. This is especially true of what is called the “Pre-Cambrian Explosion,” the vast, overwhelming, and quite sudden appearance of complex life forms at the dawn of time. Evolutionists are at a total loss to explain the Pre-Cambrian Explosion.

The biblical record indicates quite clearly that all things, including increasingly complex life forms, came fully formed from the hand of God.

Thus the fossil record is a powerful argument for the existence of a Creator or Intelligent Designer while at the same time being fatal for the theory of evolution.

“There are no detailed Darwinian accounts for the evolution of any fundamental biochemical or cellular systems, only a variety of wishful speculations.”

And consider this one from University of Bristol scientist Alan Linton…

For much more on all of this, please see my previous article entitled “44 Reasons Why Evolution Is Just A Fairy Tale For Adults“.

Once again, please feel free to believe whatever you want to believe.  Bill Nye certainly does and Pat Robertson certainly does.  I definitely strongly disagree with both of them.

But I hope that everyone out there will quit claiming that evolution is a “proven fact” like Bill Nye has been claiming.

He is only embarrassing himself in front of the entire country.

And the truth is that Bill Nye even admits that there is a vast array of things about human origins that he does not know.  Here is more from Bryan Fischer…

In the end, by making a ridiculous spectacle of himself and mocking Christianity, Bill Nye is actually fulfilling Bible prophecy.  The following was written nearly 2000 years ago…

Above all, you must understand that in the last days scoffers will come, scoffing and following their own evil desires. They will say, “Where is this ‘coming’ he promised? Ever since our ancestors died, everything goes on as it has since the beginning of creation.” But they deliberately forgetthat long ago by God’s word the heavens came into being and the earth was formed out of water and by water. By these waters also the world of that time was deluged and destroyed. By the same word the present heavens and earth are reserved for fire, being kept for the day of judgment and destruction of the ungodly.

Bill Nye can scoff at the Bible all that he wants, but he can never change the truth.

So what do you think about all of these things?  Please feel free to share your thoughts by posting a comment below…