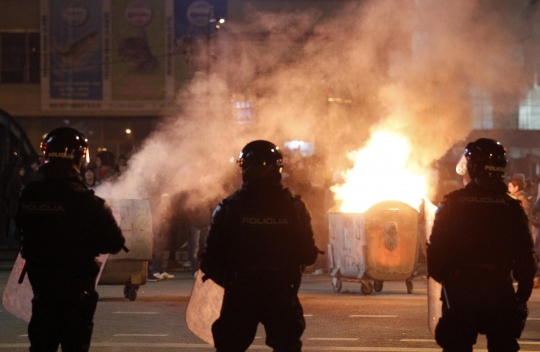 Bosnia is the latest country on the verge of total meltdown. With a 44% unemployment rate, people are disillusioned and hungry.

Police with tear gas attempted to break up protests resulting in 134 injuries which included 104 police.

“Thirty protestors and 104 policemen were admitted during the day at the emergency services” in the northeastern town of Tuzla where the protests erupted yesterday, hospital spokesman Adis Nisic told AFP.

The former Yugoslav Republic looks set to face further clashes as people protest about the worsening economic crisis that is enveloping the country. There were also protests in Sarajevo where hundreds of people gathered and threw stones at government buildings. Several other towns where unemployment and dissatisfaction are rife saw smaller protests.

“More and more people live in misery and poverty, they are hungry. People have lost hope and do not believe that the situation will improve, so their only tool is to protest,”

As I said yesterday, Can they all be wrong?