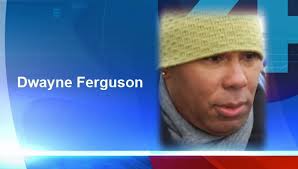 Dwayne Ferguson is the President of a local Buffalo chapter of MAD DADS (Men Against Destruction-Defending Against Drugs and Social-Disorder) and also sits on the National Board of Directors. MAD DADS is not just an anti-gun organization but gun control is a major part of their national platform. Among other things, the group organizes and supports gun buy-back programs.

Mr. Ferguson is someone who should know better than to carry a handgun into a school.

On Thursday afternoon he proved that he does not know better. WIVB4 reports:

BUFFALO, N.Y.(WIVB)- More than a dozen cop cars, the SWAT team, K9 units and the Erie County Sheriff’s Air One helicopter swarmed Harvey Austin Elementary School in Buffalo on Thursday after reports of a man with a gun near the school or on the grounds. Dwayne Ferguson, head of the Buffalo chapter of MAD DADS, was taken into custody. He will be arraigned Friday.

An anonymous call came into 911 around 4:15 p.m. that a man with a gun was seen inside the Sycamore Street school. The building was placed in lockdown and around 60 students who were in the building for after school programs were herded into the cafeteria as officers from every district in the city went room-to-room in twos and threes looking for a possible gunman. A portion of Sycamore Street and Walden Avenue were closed and parents were kept from the scene until a preliminary sweep of the school was complete.

In the preliminary sweep, no gunman was found, and school buses arrived at the school around 5:30 p.m. to take the children to School 91. But it took until at least 7 p.m. before the students began to arrive to be released to their parents.

School officials say students were checked for weapons as they boarded the buses to be transported to School 91, and all were safe and accounted for. Afterwards, staff began placing calls to parents to inform them of what was taking place.

To fully understand the complete hypocrisy of the situation, please consider that Ferguson was previously interviewed by WIVB in regard to the New York SAFE Act:

News 4 interviewed Ferguson in March of 2013 at a rally in support of the NY SAFE Act. At the time, Ferguson stated the law did not go far enough.

“Our kids are not buying assault weapons, they’re buying pistols and they’re buying them right out of community stores and back here in the school. So this is serious. It needs to go further than what it is,” he said.

It needs to go further indeed. This is a felony offense and it will be interesting to see how Ferguson fares in this situation. He claims he forgot he was carrying the handgun.

Among much else, the 2013 law, deemed New York’s SAFE Act, made it a felony to carry a gun on school property, according to The Buffalo News.

While it was always illegal to carry a gun on school grounds, the new law bumped the crime from a misdemeanor to a felony in response to the Sandy Hook Elementary School shooting.

The community activist has claimed that he forgot he was carrying his gun in a felony gun-free zone he helped create.

Rev. James E. Giles, Ferguson’s friend and the president of Buffalo’s Back to Basics Outreach Ministries, vouched for this claim.

“I’m sure Dwayne went into the school not thinking he had the gun on him,” Giles told The Buffalo News.

Giles said Ferguson even asked police on the scene what was going on.

“Dwayne’s reaction was to get his kids — he had about 50 of them — and make sure they were safe,” Giles explained.

Liberals like to use the argument that guns kill people. So forgetting about a gun is not an excuse. That gun could have killed someone while Ferguson was in the school.

Absurd? Of course it is.

But it’s no more absurd than a man who has been caught with his hand in the cookie jar and claims that he forgot he was carrying a gun. I don’t doubt that Ferguson might get a slap on the wrist but the law is the law and I would throw the book at this guy who, of all people, should know better.