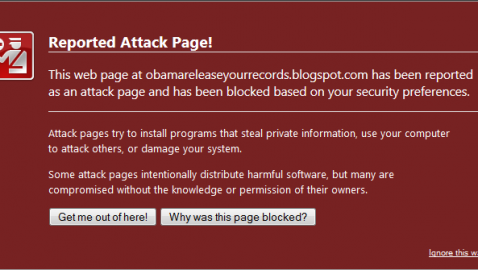 Some of you may have noticed that you cannot access the premier website on Obama’s suspect birth eligibility to be president of the United States of America — BirtherReport.com (formerly called Obama Release Your Records).

Two days ago, I received an email appeal for donation to help the site’s owner move BirtherReport.com to another server because the present server tried to shut it down. Yesterday, my Chrome browser blocked access to BirtherReport.com with a message claiming that the site had malware.

FOTM reader NaturallyBoredCitizen was in email communication with the site’s owner who said Google unilaterally had shut down his site because BirtherReport.com is “targeting an individual” — by which I assume Google means Barry Soetoro Soebarkah Stephen Dunham Barack Hussein Obama.

So I contacted the site’s owner. Here is his message, which he posted on BirtherReport.com but is read by no one because browsers are blocking our access to the site.

But Still Down; Will Still Be Moving ASAP

I don’t even know where to start. First off I want to Thank everyone in the background that helped out in one way or another. And Thanks to the many people that offered me immediate posting privileges at their respective blogs. You guys [bloggers] are the unsung heroes in this battle to get the truth out about Obama. One thing we all know certain about Obama is that he with help of the American news media defrauded the American people.

On to some of the technical issues….

Late Saturday I received an email from one of the ad servers that was (now removed) running here:

This message is regarding the recent malware notifications that some of our publishers may have experienced.  Just before noon today, our engineers discovered that one of our ad serving locations had been hacked.

Since this attack was discovered, our engineering team worked diligently until 3:45pm EST to ensure that the appropriate action was taken to secure our ad server.  Unfortunately during that time, this attack effected 7.8% of our publishers’ domains.  If you are one of these publishers, you can have Google remove the notification by following these steps:  … – snip –

Not quite sure yet why notification was not sent out sooner. Still gathering info. Some of the sample pages listed:

Before receiving the email from the ad server company I was pretty sure this was a deliberate attempt to shut down the blog. Now I’m not quite sure what to think. I do know that on Oct. 1, 2013 this blog was severely hacked to the point the template had to be replaced and on the very same day Google AdSense sent notification that it was disabling the ads running for violating TOS listing, targeting an individual or group, as their reason, even though sites like Americans Against The Tea Party [www.aattp.org] can run Google AdSense with no problem.

On one hand I thank Google and on the other I shame them. It is sad that such a great resource would let political ideology take over. That said; Google is a private company and they’re free to do as they wish. Just as I am.

This blog will be moved to a privately owned server [without TOS BS] as soon as possible. It is something that should have been done long ago but lacked the knowledge and resources. More at a later date….

P.S., Thank you to the dedicated BR/ORYR readers. You guys are the best. Ignore the noise.

9 hours after I first published this post, I received an email from BirtherReport.com’s owner, saying Google has restored his website. However, both my Chrome and Mozilla Firefox browsers are still blocking my access to the site with a “Malware Ahead” warning.

As of early Monday morning I am still unable to access the ORYR site through Google Chrome (still getting the Malware warning), but I am able to access BirtherReport.com For those of you who don’t know, Google owns blogspot.com where the ORYR is currently hosted. -Dean Garrison