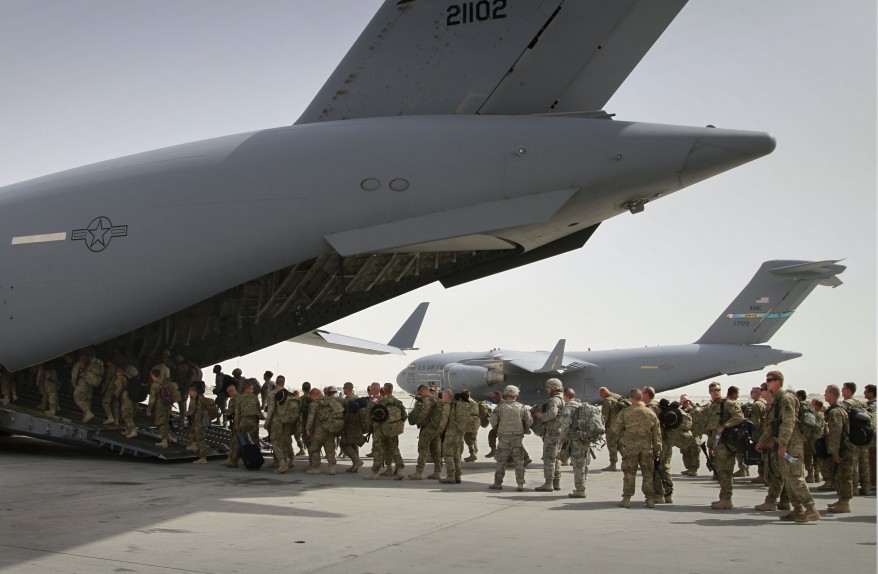 Some wars are lost in a matter of moments, others stretch on indefinitely. The defeat in Afghanistan crept up silently on the national consciousness and even though we are negotiating with the Taliban, the “D” word is hardly used by anyone. 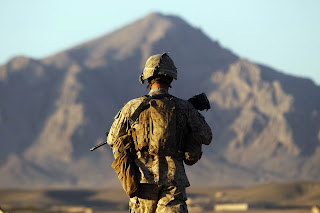 According to Obama, in one of his interminable speeches which all run together and sound the same, there really isn’t a war, just a mission, and the old mission is now becoming a new sort of mission, and the missions, all of them, whether in Afghanistan or Iraq, have been successful which is why we are wrapping them up, except that we aren’t really. And that’s about as clear as the message from the big white building with the neatly mowed lawn out front gets, except for the part about how its occupant singlehandedly parachuted into Pakistan, killed Bin Laden, and then stopped off for some curry and a humanitarian award.

Had McCain won in 2008, we would no doubt he hearing a lot about the “D” word and the quagmire in Afghanistan. But the “Q” word doesn’t really get mentioned either. No war has been lost. Only a mission is ending. And missions, unlike wars, can be defined in so many creative ways that it’s hard to know what to make of them. It’s easy to tell when a war has been lost, but a mission can never be lost, only renamed. And renaming is what Obama did to the Iraq War and the War in Afghanistan. Those wars weren’t lost; they’re only hiding out in the history books under new names and identities.

Wars are usually remembered according to the proclivities of their historians. The history books tend to record the Republican presidents of the last hundred years as either losing wars or winning wars that weren’t worth winning. Democrats however usually win every one.

The Korean War and the Vietnam War were not that far in perception at the time, but are worlds apart in the history books. Had John F. Kennedy lived to serve out two terms and then passed on the big chair to his brother, would the history books even record that the United States lost the Vietnam War? Or would it, like Afghanistan, have gone down as a story about a difficult temporary intervention that ended successfully under the leadership of a wise and caring president?

It is difficult to imagine the left’s narrative of the last century with such a big and meaty chunk taken out of it. What would have become of Oliver Stone’s career without the JFK assassination and the mythology of a cruel and senseless war in Vietnam? Or imagine the last decade if Biden and Gore had managed to talk Clinton into going after Saddam. As entertaining as such speculations might be, renaming missions and tampering with the history books does not alter the outcome of wars.

From the early days, the left had gloated that Afghanistan would become another Vietnam. And like the appointment in Samarra, in attempting to escape that Vietnamness, it repeated many of the follies of Vietnam and few of its triumphs, failing to press the advantage while expending thousands of lives based on abstract theories hatched by the bright boys in Washington and fraudulent books passed on by the wives of generals to their husbands.

We are now in the Afghanistanization stage, hanging around a country for no particular purpose, except that we aren’t very good at departures and the men who made this mess still think that Karzai and his crew can make this work if we provide them with some more training and air support without being shot in the back.

And when we have finally left and Karzai’s cobbled together government collapses, its ministers absconding to Paris and Pakistan with suitcases full of stolen aid dollars, what comes after the war?

The old conflict aimed at denying Al Qaeda one base of operations had been outdated a few years after it began. That was something that Bush instinctively understood and that his critics have only slowly become aware of. Al Qaeda is not a country or an ethnic group. It is a religious vanguard that was always meant to serve as the core of an international Islamist terrorist movement. That function had been fulfilled long before an old man watching porn in a covert compound with no authority over anyone except his many wives was finally put down the hard way.

Al Qaeda, like the Communist Party, can rise anywhere. It rose in Iraq, in Somalia, in Mali, in Syria and in countless other places. Like Burger King, the franchise possibilities are endless and the brand name recognition is universal. And unlike Burger King, you don’t even need to pay for the privilege of using the name. Set off a few bombs or kill a few foreigners and watch the money start rolling in from the fat sheiks of the oil-swollen Gulf who have never slit the throat of anything larger than a goat, but like having their own terror armies.

Obama, despite his third culture cred and his ability to carry around important books about world events while on vacation, has no clue what to do about any of that. Obama at War is really a dumber Bush at War, rehashing Bush era ideas and tactics with completely botched implementations. With Kabul in the rear-view mirror, all he has left is Bush’s policy of targeted drone strikes on Al Qaeda terrorist leaders. 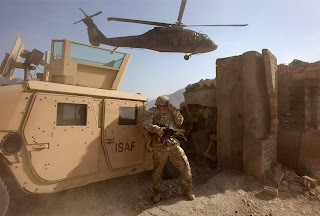 This approach has been rebranded as the smarter and smaller war. A true conflict for the 21st with Muslim grad students in Yemen chatting on XBox Live with Muslim teenagers in Jersey City to convince them to make and carry liquid explosives on board a plane in tiny shampoo bottles while overhead a drone piloted by a formerly unemployed middle-aged professional skier with a degree in drone piloting from Kansas State hunts for them silently in their clan territories

The targeted strike approach was largely borrowed from the Israeli playbook. Like Israel, the United States is in a tangled conflict that won’t end any time soon. And like Israel, it’s relying on saving some lives and weakening the terrorist infrastructure by taking out a few leaders here and there. Israel’s targeted strikes on Hamas and Islamic Jihad leaders never ended the conflict, but aborted more than a few terrorist plots by killing the bomb-makers and planners who were making them happen.

The actual conflict did not end. Neither did the attacks. Rather than shooting soldiers, Israel was shooting officers, because shooting soldiers required extended ground engagements and occupations that had become politically untenable. The United States has embraced the same strategy for the same reasons using technology that came out of Israel. But it hasn’t given much thought to what comes after that.

The failure of the targeted strikes and arrests of terrorist leaders led Israel to pursue a physical separation through barriers and fences. The terrorists compensated for that with rockets and shelling. That led Israel to develop the Iron Dome, a defensive anti-rocket system. The suicide bomber, once ubiquitous, became a rarity, but the attacks have grown more powerful as the terrorists used the territory that they gained through Israeli withdrawals to deploy heavier long-range weapons that can reach major cities.

If the United States follows this same pattern of withdrawal and fortification, then by 2028, there might be an actual Fortress America guarded by anti-missile systems against Pakistani, Iranian and Egyptian nukes. And that scenario, as troubled as it sounds, is probably one of the better ones.

Israel withdrew from physical territories opening the way for a Hamas takeover of Gaza. Obama withdrew from geopolitical territories, announcing in Cairo that the United States would no longer support the undemocratic dictators of the Muslim world unless they had oil. Hamas, or its Egyptian parent organization, took over Egypt. Across the region, Islamist regimes rose and American allies fell. The Islamist winners of democratic elections turned into dictators leaving the United States in the awkward position of supporting new dictators while being jeered and denounced by the Arab Street.

What’s the next step? It doesn’t appear that there is one. Geniuses like Brennan only thought as far ahead as draining Muslim anger by rewarding political Islamists while using drone warfare to decimate violent Islamists. Not only is this distinction mostly imaginary, but the rise of political Islamists has made for more Al Qaeda takeovers and more work for the drones in North Africa.

The plan has failed and the second term is underway. It is very doubtful that Obama, whose big plan for Afghanistan was to copy the Bush plan for Iraq that he denounced in the Senate, has a backup plan. Brennan certainly does not. Secretary of State John Kerry is spending a lot of time talking about Global Warming while waiting a week for a callback from Russia. It’s hard to think of a worse bunch of people in whose hands to put the fate of the nation and the world.

Both Bush and Obama largely missed the point of September 11, which is that it matters less how many training camps Al Qaeda has in some desert where there are more drugs and RPGs than people, but how many operatives they have in the United States. The terrorist attacks carried out by Al Qaeda in America all required that their operatives either be in the United States or have permission to enter it. The truly dangerous training camps aren’t in Mali or in Afghanistan; they are in Jersey City and Minneapolis. The easiest way to stop the next Al Qaeda terrorist attack is to end immigration from the Muslim world. 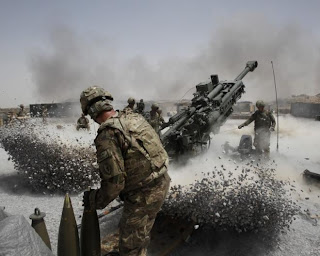 That is not a position that any presidential candidate, Republican or Democrat, is likely to run on any time soon. Instead anyone who wants the job is salivating at the prospect of pinning Green Cards to anyone with a university degree. Articulating it is taboo even in Israel. And yet after Afghanistan, the United States might find that it has no choice but to build that southern border fence and to slash immigration from the more explosive parts of the world. That revelation may not come tomorrow, but it likely will come.

In Israel, it was Rabin who stated that Gaza had to be taken out of Tel Aviv and who began the construction of the West Bank security barrier because he realized that terrorism would destroy the peace process. An American Rabin may well be a liberal who is forced to come to the realization that the only way to avoid constant conflicts with the Muslim world is to begin cutting off the flow of Muslim immigrants to America.

Such a realization, if it ever comes, is still a long way off. For now the drone war remains a clumsy fallback position. As long as there are no major terrorist attacks, the limited drone strikes are enough to satisfy most Americans. But when one of the Al Qaeda franchises begins poring over blueprints of a major American landmark and another September 11 follows, then the question that has been held in abeyance after Afghanistan will suddenly reappear. What do we do now?

BREAKING TRUMP NEWS: “NEW ELECTION OR PAST ELECTION DECERTIFIED AND TRUMP DECLARED WINNER” THIS IS ABSOLUTELY HUGE!!! EVERYTHING COULD CHANGE!!!
AFF