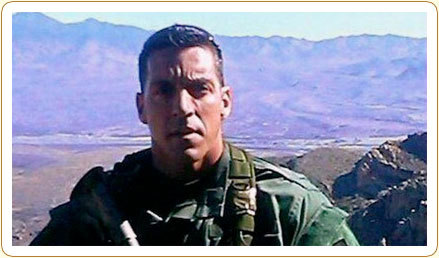 “Brian is my hero…he was a dedicated American. He would always say, ‘This is the best country in the world, Mom.’”

On Monday, sentence was handed down for one of those involved in the cold-blooded murder of Federal Border Agent Brian Terry…30 years in prison.

Manuel Osorio-Arellanes…the only man taken into U.S. custody in connection with Terry’s murder and the only one to date sentenced in said murder…is 37 years old, meaning he’ll probably get out of prison before he ever serves the full 30 years…hell…Obama will most likely pardon him before he leaves office.

Is this justice served…NOT in my opinion especially when Osorio-Arellanes is NOT the actual shooter of Brian Terry, and is but a man who pleaded guilty to felony murder in a plea deal with federal prosecutors in exchange for their taking the death penalty off the table…in other words a man who was out only to save his own life NOT caring about the life he helped take.

The life he helped take in what became known as ‘Fast and Furious‘…the nefarious gunwalking operation that happened between September 2009 and December 2010, where Eric Holder’s Justice Department sanctioned the ILLEGAL sale of more than 2500 rifles that allowed suspected straw gun buyers and drug smugglers to obtain weapons from gun shops in Arizona.

‘Fast and Furious‘…with more than 1400 of those guns still missing in Mexico.

‘Fast and Furious‘…where weapons from that operation were found at the scene of Brian Terry’s murder and at numerous crime scenes in Mexico and the United States.

‘Fast and Furious‘…where just one man out of the five involved has been brought to justice and again, he’s NOT even the shooter of Agent Terry.

‘Fast and Furious‘…where two other suspects in Terry’s murder have been taken into custody in Mexico and are awaiting extradition to the U.S. (which might never happen as Mexico will NOT extradite anyone who is facing a death sentence… meaning it’s alright to kill one of ours but we dare NOT kill one of theirs even if found guilty in a court of law) while the two others involved still have NOT been caught.

‘Fast and Furious‘…where certain guilty parties of name…as in Attorney General Eric Holder and President (gag) Barack HUSSEIN Obama who have yet been called to task…one who is hiding something by his evoking ‘executive privilege’ over documents involved even after he denied having any knowledge of the event…and doing so on the same day the other one was found in contempt of Congress for his refusal to cooperate with the investigation.

Something still stinks here doesn’t it for we know Obama and Holder are experts at covering-up any semblance of anything even related to the word ‘truth’…and neither has answered for their deflection and dismissing of the truth about ‘Fast and Furious’…just saying.

And before handing down the sentence U.S. District Court Judge David C. Bury said to Osorio-Arellanes,“You illegally entered the United States with the sole intention of committing armed robbery…there is no doubt that your prey was human. Law enforcement got in your way, as is their duty, and as a result a good agent died.”

And herein lies the crux of all that went wrong and all can be summed up with two simple words …”illegally entered.”

“Illegally entered“…the murderers of Brian Terry entered our country ILLEGALLY… were able to cross our borders ILLEGALLY simply because our borders are NOT sealed. Would Brian Terry be alive today if our borders had been sealed…there’s more than a good chance that he would be.

The fact is that in the past few years drug related violence of all kind has increased ten-fold in many northern Mexican cities, with ILLEGAL drugs and so-called ‘undocumented’ (translation: ILLEGAL) immigrants continuing to cross over the border into our country undetected…or as in the case of ‘Fast and Furious’…eyes were being closed to their entry.

Drugs…drug smugglers…the last thing America needs any more of. And while most of those who ILLEGALLY cross the border are people coming here to work in the fields or in construction, there still is a large number of people…a number that increases everyday…who come here solely to sell drugs (monetarily advantageous to working in the fields for minimum wage or less) or to be part of criminal gangs hell bent on committing crimes…including murder. And to that effect there are hundreds of drug tunnels all along the U.S./Mexico border built by the drug cartels. And the smugglers (like those who murdered Brian Terry) who used to move just illegal drugs across the border have now branched out into smuggling these very ILLEGAL immigrants that this country does NOT need any more of.

And all this adds even more credence to all the other reasons (just being ILLEGAL is criminal, taking jobs away from Americans, raping our welfare rolls and health care system, etc., etc., etc.) why sealing our southern border with Mexico…all 1,969-miles of it…is a must…a must with the final goal being ‘zero tolerance’ for any and all ILLEGAL crossings…for we cannot allow more Brian Terry’s to happen… period.

And oh YES…we must bring charges against Barack HUSSEIN Obama and Eric Holder for their cover-up of the facts concerning the murder of Border Agent Brian Terry and for the ‘Fast and Furious’ operation itself…it’s simply the right thing to do.