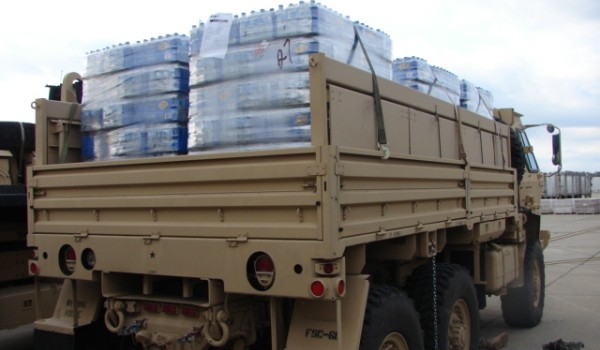 Last month, a chemical spill in West Virginia left more than half a million residents unable to use their tap water for drinking, cooking, bathing or cleaning. The incident also forced schools, bars and restaurants to close.

FEMA has been providing bottled water and other assistance since the disaster, but state and local agencies have spent millions of dollars to deal with the crisis. Tomblin asked FEMA for grant assistance to provide the state with federal funding to reimburse it and the counties in the water emergency area part of the costs of the response.

FEMA has denied that request.

In a letter to Tomblin, Elizabeth A. Zimmerman, a FEMA administrator, said:

“Based on our review of all of the information available, it has been determined that the event was not of such severity and magnitude as to warrant grant assistance under this emergency declaration.”

In a statement released by his office, Governor Tomblin responded:

“I am extremely disappointed by FEMA’s initial response, and I share the frustration and anger of West Virginians who have endured this crisis.”

Tomblin estimated that state and local agencies will spend more than $2 million in response to the water crisis. In addition, the state will pay 25% of the costs of the FEMA aid already provided. If FEMA approved the request, they would have paid 75% of eligible costs for first responders, local and state governments, and certain nonprofit agencies.

The additional FEMA aid Tomblin requested is called Category B, Emergency Protective Measures, which is defined by FEMA as “activities undertaken by a community before, during and following a disaster,” that are necessary to reduce an immediate threat to life, health or safety.

In the request, Tomblin wrote:

“This is necessary due to the extraordinary expenditures incurred by state and local responding agencies and the adverse effects on the economy and tax revenues. I must emphasize that the response is ongoing and several of the key agencies have not been able to take the time to provide estimates of their costs.

One source has estimated that hotels and restaurants have lost $1 million in revenue a day, while other businesses have had to close part of their operation.”

Tomblin and some members of the state’s congressional delegation are working to appeal FEMA’s decision.

Freedom Industries, the company responsible for the leak, filed for bankruptcy immediately after the incident – making it very difficult for anyone to sue them for damages.

Meanwhile, the state is still suffering the consequences of the spill – a shipment of bottled water provided by FEMA was removed from three Kanawha County schools because of odor and taste problems.

The bottled water was described as “musty” with a “strong odor” and “a problem with the taste,” according to a news release from the state Department of Military Affairs and Public Safety. The water issues were related to storage, not the coal-cleaning chemical Crude MCHM, which tainted the region’s drinking water.

The water was in use at Sharon Dawes Elementary, John Adams Middle and Andrew Jackson Middle schools.

The ban on its use applies to one specific lot of Ice Mountain, although other lots of Ice Mountain water in storage have been taken out of circulation.

A spokeswoman for Ice Mountain, which is owned by Nestle, did not respond to a request for comment on Wednesday.

State Department of Health and Human Resources spokeswoman Allison Adler said the water was tested for bacteria and came back negative, and further testing is being done:

“The bottled water program has been in contact with the manufacturer regarding the taste and odor concerns and samples have been submitted to the company for further testing and investigation. It is believed that the odor is related to where the water bottles were stored prior to being donated to West Virginia’s schools.”

Disasters like this one make it painfully apparent that we simply cannot trust the government to take care of us in an emergency. As Daisy Luther of The Organic Prepper warns, it doesn’t take long for a water shortage to become life threatening, and preparedness is key:

If you don’t have at least a one-month supply of fresh pure drinking water properly stored, along with plans for long-term water sources, let this industrial accident be a wake-up call.  An epic disaster doesn’t have to be a dramatic, end-of-the-world scenario.  This should serve as a cautionary tale to those who are blithely unprepared.

If you don’t want to be at the tender mercies of FEMA and the government for your survival, get prepared. A full month’s supply of drinking water for a family of 4 is approximately $150, give or take a little, depending on the prices in your area. As well, fill empty containers with tap water that can be safely used for pets, for flushing, and for cleaning and hygiene purposes. This is a small investment to make for your family’s security and well-being in the event of an emergency. You don’t want to be one of the people standing in line for whatever the government chooses to dole out to you.