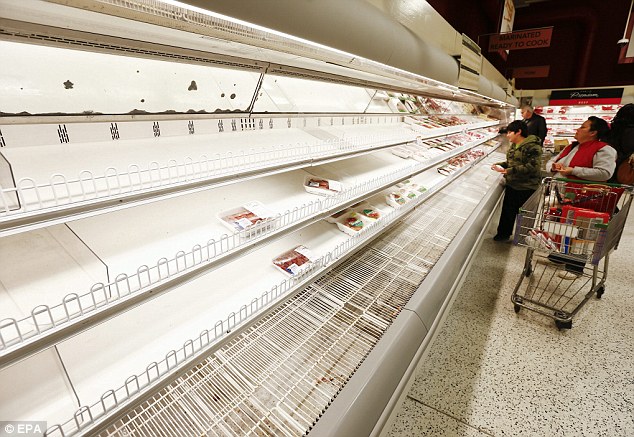 Every year somewhere in our country tens of thousands of Americans experience an emergency resulting from any number of scenarios that may include natural disasters, economic hardship or other unexpected circumstances. And every year we watch with amazement as those in areas that have been affected by snow storms, hurricanes, tornadoes or earthquakes lose everything and have no backup plan to deal with the crisis.

The thin veneer of our civilization should be apparent to everyone, yet it seems that no one really gets it.

Despite warnings from FEMA, as well as the prevalence of popular preparedness TV shows, Americans still don’t seem to understand how susceptible we are to a complete destabilization of life as we know it. It boggles the mind that most people seem to think that when disasters strikes they’ll be able to depend on someone else to provide them with assistance.

Recent disasters, especially those here in the United States, are often limited to a particular city or region, so emergency service personal are often able to get things under control within a week or two. But events like Hurricane Katrina in New Orleans, Hurricane Sandy on the east coast, and the recent chemical spill in West Virginia often only affect a small percentage of our domestic population.

But what if the next disaster comes in the form of an earthquake on the New Madrid fault line? Or what if the sun unleashes a solar flare powerful enough to take down our electrical grid? Or what if a rogue terror organization were to detonate a nuclear weapon or dirty bomb over U.S. soil?

All of these scenarios would have an immediate and lasting impact on not tens of thousands of people, but millions.

What would it look like in America on that particular day?

If this week’s snow storm east of the Mississippi is any indication, then we can expect widespread pandemonium and panic:

Atlanta residents ransacked neighborhood grocery stores in frantic preparation for their second major snowstorm of the year, waging fights over food items and leaving destruction and empty shelves in their wake, a stunning precursor to what will ensue once a major crisis impacts the U.S.

After three inches of snow shut the city down two weeks ago, causing major havoc and leaving miles of cars stranded on immobile roadways, the residents of Atlanta took heed and shopped early.

According to people who Tweeted photos of barren store shelves, residents went crazy over essentials like milk, bread, water and eggs, and in some cases “people were fighting. Yes fighting,” alleges one user.

Given Americans’ propensity to riot over such inanities as Black Friday sales and winning sports teams, could fights and empty shelves also be expected in the midst of a major crisis?

The pictures and real-time commentary below demonstrate exactly why “preppers” do what they do, despite being ridiculed and laughed at by the myrmidons of the mainstream.

Yikes!!! 7:15pm in #atlantasnow and Publix is out of bread… OMG – that equals a lot of sandwiches.. pic.twitter.com/I6chFaKQjK

@dcjames5 @rissakris Atlanta is already panicking like a hurricane is coming. I took this pic at target in Dunwoody. pic.twitter.com/geeuwXQyQF

If a transient winter storm for which we had ample advance warning leads to panic buying, empty store shelves and brawls, then what do you think is going to happen in a worst case scenario?

It’ll start just like Atlanta, with people in panic mode looking for food, water andessential supplies. Once the food runs out, so will patience. Chances are that emergency responders will be overwhelmed or they’ll be taking care of their own families, so calls for help will go unanswered. Government will either be too slow to respond or they won’t show up at all:

Experts say people should be prepared to look after themselves for at least three days after any major disaster.

But Mr Winter says most people have no plans in place.

“If we turn off power and water, how long will you be able to survive?” he said.

“When we put to people, ‘Can you survive for 72 hours without external help?’, the reaction is their jaw drops.”

Lesson #1: There will be immediate panic

That’s when the situation goes critical.

The looting and violence will begin. First they’ll target businesses like grocery stores, warehouses, and restaurants. When those are picked clean, they’ll go door-to-door.

Will you be ready? Because they won’t be knocking.