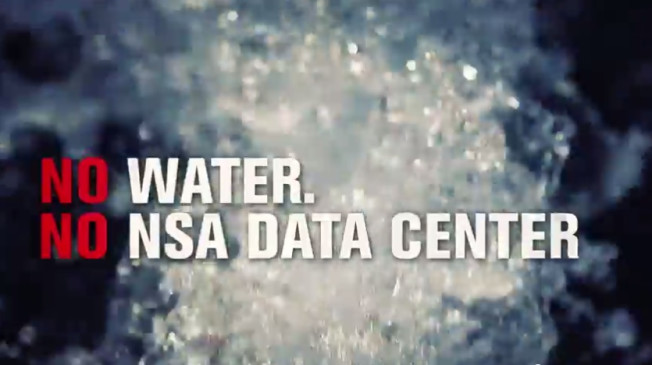 Can Utah shut down the new NSA data center by turning off the water?

A bill proposed by state Rep. Marc Roberts seeks to do just that.

Based on model legislation drafted by a transpartisan coalition organized by the Tenth Amendment Center (TAC) and the Bill of Rights Defense Committee (BORDC) called the OffNow Coalition, the Fourth Amendment Protection Act would prohibit state material support, participation, or assistance to any federal agency that collects electronic data or metadata without a search warrant “that particularly describes the person, place and thing to be searched or seized.”

This puts contracts that provide the 1.7 million gallons of water a day necessary to cool the NSA computers at its Bluffdale facility in the crosshairs.

“Without question, the mass surveillance and data collection by the Utah Data Center is a delicate and important matter,” Roberts said. “But for me, the language of the Fourth Amendment is clear.  It simply protects us against unreasonable and unwarranted searches or seizures of our persons, private residencies and property, documents and information and personal and private belongings.  This legislation preserves those rights to the people.”

Bluffdale, a political subdivision of Utah, provided the NSA with a sweetheart water deal. The proposed legislation would begin the process of ending that deal, potentially crippling the NSA’s ability to keep the facility functional.

He called the potential impact of this legislation significant, especially compared to what Congress has done.

“In 1975, Sen. Frank Church warned that the power of the NSA could enable ‘total tyranny.’ He recommended that Congress should limit the agency’s power. Almost four decades later, we’re still waiting. Congress is not going to stop the NSA. The people and their states have to,” Boldin said. “Turn it off.”

“At stake is nothing less than our nation’s triumph in the Cold War. The NSA’s decade of warrantless surveillance en masse assaults not only the rights of hundreds of millions of law-abiding Americans, and our democracy as a whole, but resembles Soviet-style spying — on meth, empowered and amplified by the past generation’s remarkable advances in computing technology,” he said. “Utah residents have a chance to take matters into their own hands, defending democracy by shutting off state resources consumed by the Bluffdale data center in its assault on We the People, our fundamental rights, and the Constitution that enshrines them. ”

Utah doesn’t stand alone. Earlier this week, a group of Maryland legislators introduced a similar bill, targeting water and other resources to NSA headquarters. Lawmakers in more than 10 other states, including California, Vermont and Alaska, have also introduced the legislation. A bill in Tennessee addresses material support and resources to the NSA’s encryption-breaking facility at Oak Ridge.

Boldin said other states need to join the push, even those without NSA facilities. He called it essential.

“If enough states do this in the coming years, the NSA won’t have a place in the country where their spy centers are welcome,” he said.

Other provisions of the Fourth Amendment Protection Act would have an impact, too. The bill would make data collected by the NSA and shared with state and local law enforcement in Utah inadmissible in court, unless a specific warrant is issued.

TAC national communications director Mike Maharrey said that this provision might prove as important as cutting off the water because it erases a practical effect of NSA spying.

“We know the NSA shares data with state and local law enforcement. We know from a Reuters report that most of this shared data has absolutely nothing to do with national security issues,” he said. “This data sharing shoves a dagger into the heart of the Fourth Amendment. This bill would stop that from happening immediately.”

The legislation rests on a well-established legal principle known as the anti-commandeering doctrine. Simply put, the federal government cannot “commandeer” or coerce states into implementing or enforcing federal acts or regulations – constitutional or not. The anti-commandeering doctrine rests primarily on four Supreme Court cases dating back to 1842. The 1997 case, Printz v. US, serves as the modern cornerstone. The majority opinion deemed commandeering “incompatible with our constitutional system.”

Boldin emphasized this is just the beginning.

“It took the people of Illinois ten years to legalize marijuana for medical use,” he said. “This isn’t going to be easy, and we’re not stopping until we win. The NSA has a choice; follow the constitution or get the hell out.”

The OffNow coalition is group of grassroots organizations and individuals spanning the political spectrum committed to stopping unconstitutional NSA spying through state and local activism.