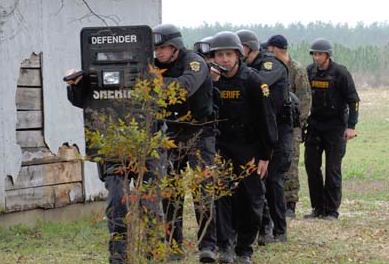 A paramilitary team operated by North Carolina’s Wilson County Sheriff’s Office recently executed what was described as a “high risk search warrant” on a narcotics suspect. The members of the “Emergency Response Team,” clad in black armor, bucket helmets, and balaclavas, found what “nearly a pound of marijuana” – which could be the yield from a single healthy plant – and a single handgun.

A photograph taken by an embedded correspondent for the Wilson Times newspaper showed two of the masked SWAT operators in full military regalia. One of them bore, ‘mid snow and ice, a tactical shield inscribed with a strange device – “Defender.”

To those not of an Orwellian cast of mind, it’s not clear what or whom the stormtroopers were defending. Peace officers don’t dress that way, nor do they conduct military-style raids to arrest people suspected of non-violent offenses. Perhaps most importantly, peace officers don’t wear masks to hide their identity from the people they are supposedly protecting.

Many of the federal operatives who carried out the 1992 siege against the Randy Weaver family at Ruby Ridge, Idaho were cloaked in ski masks. The same was true of the berserkers from the combined FBI-Delta Force death squad that annihilated the Branch Davidians at Mt. Carmel the following April.

The federal marshals sent to “liberate” Elian Gonzalez from his Miami relatives in 2000 wore military helmets and goggles during the actual raid, but insisted on being masked during the post-raid press conference. During immigration enforcement sweeps carried out by Sheriff Joe Arpaio, the deputies acting on behalf of the Mussolini of Maricopa County will often wear balaclavas as they drag people out of cars or away from fast-food restaurants. In one particularly memorable incident, a mother was stopped for a traffic violation and seized from her car at gunpoint by goons in ski masks while her children shrieked in terror.

Beginning in the late 1990s, masked and heavily-armed SWAT operatives with Fresno, California’s “Violent Crime Suppression Unit” (VCSU) would patrol targeted neighborhoods seven nights a week. Rather than investigating crimes and arresting suspects, the VCSU conducted what the military calls “contact patrols” – that is, they prowl “like a wolf pack” (to use the department’s description) and see what trouble they could stir up.

“`Contacts’ generally involve swooping onto street corners, forcing pedestrians to the ground, searching them, running warrant checks, taking photos, and entering all the new `intelligence’ into a state database from computer terminals in each patrol car,” recalled crime reporter Christian Parenti in his book Lockdown America: Police and Prisons in the Age of Crisis. Every neighborhood was considered a “war zone,” and all of the inhabitants therein were treated as “enemy combatants.”

“If you’re 21, male, living in one of these neighborhoods, and you’re not in our computer, then there’s definitely something wrong,” insisted VCSU officer Paul Boyer. This isn’t because such people are unjustly abused innocent people, but rather particularly devious “enemy combatants” who had somehow escaped the dragnet.

The VCSU would often take part in joint paramilitary operations with the FBI, DEA, and the San Francisco Police Department. Those raids were not conducted pursuant to warrants or probable cause regarding specific crimes, but were carried out as a “Shock and Awe”-style displays of military superiority by the local occupation authority. The agencies involved in these raids referred to their approach as “clear and hold” – a phrase that would later be employed by U.S. military personnel conducting occupation missions in Iraq, Afghanistan, and elsewhere.

“I feel bad for the innocent women and children that were here,” stated SFPD narcotics lieutenant Kitt Crenshaw after a nighttime military raid terrorized an apartment complex and netted a minuscule amount of marijuana, “but in a way they do bear some responsibility for harboring drug dealers.”

In that statement we find an eerie foreshadowing of the sadistic, dismissive statement from the operator of an attack helicopter during the atrocity captured in the “Collateral Murder” video. Informed that two children had been severely wounded in the unprovoked attack, one of the assailants sneered: “Well, it’s their fault for bringing their kids into a battle.”

Bear in mind that the military raids in which Crenshaw and his comrades participated were carried out in Fresno, California, not Iraq – and they took place years before the 9/11 attacks.

Remember: This was taking place in the United States of America before the 9/11 attacks, the creation of the Department of Homeland Security.

There are some elements of the domestic army of occupation who are making a token effort to win the “hearts and minds” of those living in the neighborhoods they patrol. A propaganda video produced by the Kansas City Police Department is intended to demonstrate the gentle and humane touch with which the agency carries out its occupation – but unwittingly illustrates just how thoroughly militarized domestic law enforcement has become.

The clip begins with an on-screen narration by a female officer who appears to be on a potent tranquilizer. She soothingly explains that when tactical teams – that is, military units in black body armor – serve search warrants, the element of surprise is important “for the safety of everyone.” She concedes that operations of this kind are traumatic “not only for occupants of the house, but for neighbors as well,” she continues. This is why post-raid neighborhood outreach by the stormtroopers is now standard procedure.

“Anytime we’re going to kick in a house like this, we’ve got kids in the neighborhood … and it kind of resembles a military operation,” explains Sgt. Chip Huth, who isn’t quite honest enough to admit that each of those raids is a military operation, an example of what the Pentagon calls “operations other than war.”

According to Sgt. Huth, “We have to establish objective peace before we can move on to any community-building peace.”

Like the expression “clear and hold,” Huth’s statement was formulated in the language of military occupation: Pacify a targeted neighborhood, then try to win the “hearts and minds” of residents.

This is the “new normal” for young Americans in 2014 – but a mere generation ago it was unimaginable except in dystopian fiction.

Back in the mid-1980s, a miniseries called “Amerika” depicted the United States following a takeover by the Soviet Union. Order was maintained in Soviet-occupied America by a cadre of black-clad stormtroopers whose faces were always concealed from the public.

That entertaining but lurid program wildly over-estimated the Soviet threat to our national independence. However, it uncannily anticipated our descent into quasi-totalitarian rule. The Soviet-style enforcers we have to fear are found in our local police departments and sheriff’s offices.