RT is the best English language news source available to Americans. On January 29, RT published a photo of 5 presidential appointees lying through their teeth to Congress. 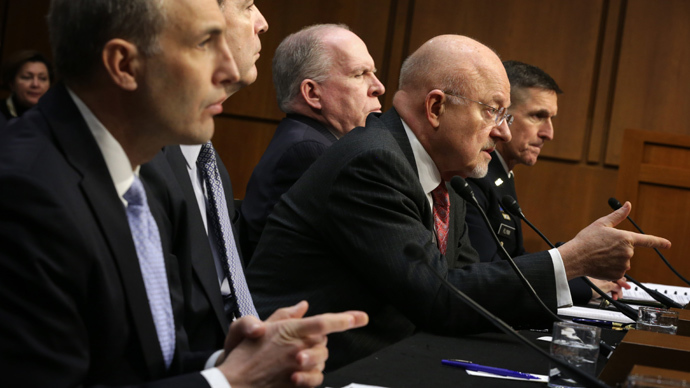 All five of these Gestapo wannabes are in violation of their oath of office to protect the Constitution of the United States. They have relentlessly violated the Constitution, which makes these five, who are in charge of US intelligence and black operations, traitors to the United States.  Yet, they have not been arrested and put on trial.  Congress is content to sit there and listen to their ongoing lies time after time after time, despite the fact that these 5 have committed more and worse crimes against our country than the “terrorists” that serve as an excuse for the crimes committed by the intelligence agencies.

Remember, dear readers, it is a crime for you to lie to any federal agent even if you are not under oath or before Congress. How much more evidence do you need that you are not a citizen of the United States but a mere serf of the federal government?  Will you ever wake up?

James Clapper, who has the grand title of Director Of National Intelligence, is an admitted liar to the US Congress but nevertheless remains in office.  That Clapper is still in office is a good measure of the decline both in the integrity of the US government and in the integrity that Congress, media, and the public expect from the government.  President Nixon was driven from office for a very small thing:  Nixon lied about when he learned about a burglary with which he had nothing to do.  Clapper brazenly lied to the US Congress, denying that he was spying on members of the US Congress.

Clapper is not only in violation of the Constitution, he has committed a felony, especially under the stretched interpretation of laws that is the norm for Department of Justice prosecutions. Huge numbers of Americans are in prison for offenses that are molehills compared to Clapper’s, or for that matter, any of the other five sitting there lying to Congress.

The Five Criminals told Congress that Edward Snowden, who is under the protection of the Russian government, must be made to give back the evidence of NSA spying on the entire world before some US troops or diplomats are killed by terrorists in some future war started by Washington, which routinely dismisses the victims of its war crimes as “collateral damage.”

None of the Five Criminals were able to specify how Congress could make the Russian government hand over Snowden. Rabid Republican warmongers have falsely and propagandistically accused Snowden of being “a Russian spy.”  What utter dishonesty! The only reason Snowden is in Russia is that the US, in violation of international law, refuses to allow an airplane to fly from Russia with Snowden to any of the South American countries that have granted Snowden asylum.  The fact that Snowden is in Russia is entirely the fault of Washington.

As I have written and said on many occasions, facts mean nothing to Washington, to the presstitute media, and to most of the American population, who prefer comforting lies to reality.

No one in the American media or most Internet sites will dare tell you that the reason the Five Criminals are again lying to Congress is to deflect Congress and an insouciant public and media from the fact that they have violated the law and their oath of office, and that the only purpose of invoking “national security” is to protect the criminal actions of the security agencies from being discovered. “National Security” is the blanket under which the crimes of government are hidden.

All that “national security” means is that “we are not going to let anyone find out that we are nothing but a gang of criminal thugs, and we are going to use the cover of national security to demonize Snowden who told on us.”

The so-called “security agencies” and their media whores have created a wartime atmosphere of fear as if the “world’s only superpower” was about to be destroyed by a handful of lightly armed fighters thousands of miles away who resist Washington’s invasions of their countries in corners of the earth that most Americans cannot find on a map. What kind of superpower is so terrified by peoples that the superpower choses to invade and murder?  If the wronged people are so threatening, the superpower should stay at home and leave them alone.

Listen to this bullshit from Clapper:  As a consequence of Snowden, “the nation is less safe and its people less secure.” The truth is the opposite of what Clapper states.  Snowden alerted us to the fact that Clapper was shredding the US Constitution that is our greatest protection. Clapper, who should be in the dock for treason, has stolen our rights and our shield against harm and abuse from arbitrary government power. Clapper is an enemy of every American.

Listen to this bullshit from Lt. Gen, Michael Flynn, director of the US Defense Intelligence Agency, who stupidly asserts that Snowden’s revelations of illegal mass spying on the US citizens and the world caused “grave damage” to “national security.”

What the general means is that it caused damage to his reputation and brought him some cause for anxiety by revealing that he was engaged in criminal activity.  But the general knew how to invoke the sympathy and support of the right-wing superpatriots.  He declared that the greatest cost of Snowden’s revelations is “the cost of human lives on tomorrow’s battlefield or in some place where we will put our military forces when we ask them to go into harm’s way.”  He is, of course, talking about the next time that Washington criminally attacks another country in total violation of the Nuremberg standard.

Senator Barbara Mikulski listening to this bullshit said that what was needed was a Supreme Court ruling “to determine the constitutionality of these programs.”  Was this sincere or a cop-out? Why is Mikulski passing the buck? The current Republican Supreme Court is corrupt and will not defend the Constitution. One of the leading Republican lights, as dimly lit as he is, Justice Antonin Scalia, truthfully said that concentration camps are a likely future reality for Americans and that the Supreme Court would not do anything about the tyranny should the executive branch think it necessary.

Nothing will be fixed until the Five Criminals are arrested and put on trial for treason and until Congress defunds the illegal wars and states firmly, backed up with the threat of impeachment, that there is no such thing as “the unitary executive” who is above law, Constitution, Congress, and the federal courts. The Supreme Court will not protect us.  Congress must put the executive branch on notice that it is not above the law and the Constitution.

Americans have lost the rule of law.  Unless Congress quickly restores it, the country is lost.

Paul Craig Roberts, a former Assistant Secretary of the US Treasury and former associate editor of the Wall Street Journal, has been reporting shocking cases of prosecutorial abuse for two decades. A new edition of his book, The Tyranny of Good Intentions, co-authored with Lawrence Stratton, a documented account of how americans lost the protection of law, has been released by Random House. Visit his website.