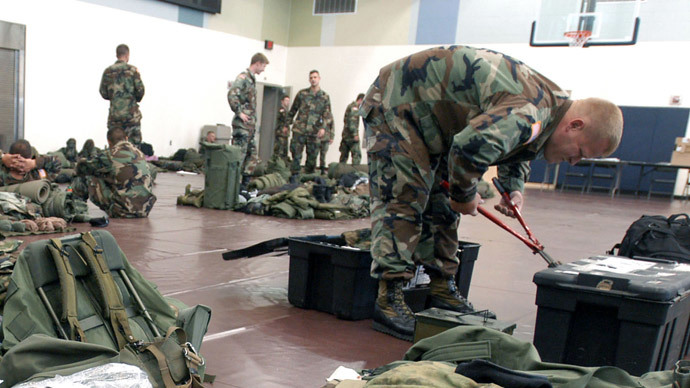 Documents recently obtained by the Conservative “media watchdog” organization MediaTrackers, have revealed that yet another exercise has taken place between civilian first responders and military units which presented gun rights advocates, Second Amendment supporters, and individuals who expressed “anti-government sentiment” as domestic terrorists.

The exercise, which actually took place in January 2013, imagined a plot hatched and initiated by local school district employees to use biological weapons like Ricin in order to promote their pro-gun philosophy. The documents obtained by MediaTrackers show that the scenario involved two Portsmouth Junior High School employees working on the orders of a fictional white nationalist leader named William Pierce who poisoned school lunches with mustard gas.

The fictional event then discovers that the biological weapons were being manufactured inside the school, which required the activation of containment and decontamination procedures. Drill participants also “discovered” documents demonstrating the fictional terrorists’ anti-government sentiments and a note identifying Pierce as the leader of the organization.

The documents also state that “On the chalkboard as well as the tables there were several statements about protecting Gun Rights and Second Amendment rights. Additionally a phone number was written on the chalk board with the label William “the boss” Pierce.”

The summary also suggests that the first-responders took note of documents found inside the building pertaining to the school’s lunch schedule, as well as instructions and informational sheets on the poisonous compound ricin. Although it’s not referenced specifically in the incident summary report, the 38 pages of documents obtained by MediaTrackers also includes a 2011 article pertaining to gun control that’s on file alongside other evidence obtained from the school, including the name and phone number purportedly belonging to William Pierce, a now-deceased notorious neo-Nazi. MediaTrackers’ Hathaway says the documents that have been made public show that Pierce was portrayed during the trill as the “fiction right-wing terrorists’ leader.”

RT also describes the secretive manner in which the training exercise was addressed by the local authorities when questioned by MediaTrackers. RT states,

When MediaTrackers approached the Scioto County Emergency Management Agency director Kim Carver about the documents, though, she said she was “not going to get into an Ohio Army National Guard issue that you have with them.”

Ohio National Guard Communications Director James Sims II, MediaTrackers claims, told the website that it was “not relevant” as to why conservatives may feel targeted by being portrayed as anti-government extremists.

“Okay, I’m gonna stop ya there. I’m going to quit this conversation,” Sims told the site when reached for comment. “You have a good day.”

Buckeye Firearms Association spokesman Chad Baus accurately summed up the revelation of the ONG drills by stating “[I]t is a scary day indeed when law enforcement are being trained that Second Amendment advocates are the enemy.”