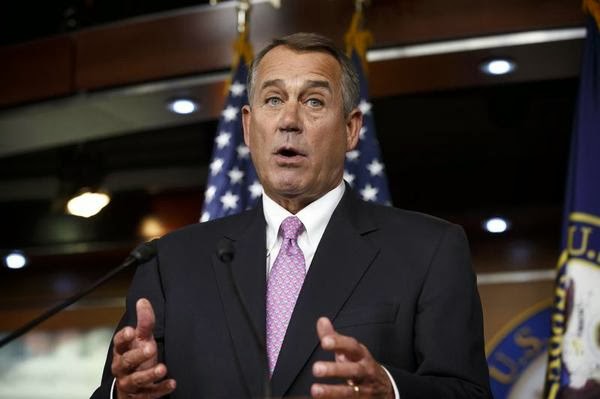 “He gave the president exactly what he wanted, which is exactly what the Republican Party said we did not want.” – Rep. Tim Huelskamp R-Kansas

Some traitors are obvious…the names Barack HUSSEIN Obama and Hillary Clinton just roll off the tongue…but sadly some traitors cause one to sigh in total disillusionment…and Speaker of the House John Boehner is one such man…or is he?

Leading the Republican push to raise the government’s borrowing limit until March 2015 without any conditions, on the surface it appears that John Boehner sold his country, his party, and ‘We the People’ out…yet again…as he bowed to the will of Barack HUSSEIN Obama…the man he knows damn well is on target in his quest to implode our country from within.

And 27 fellow Republicans* voted right along with him.

This 221 to 201 vote represented the first debt ceiling increase since 2009 that was NOT attached to other legislation. And thanks to Boehner the Republican party is for now even more divided. Appearing to set off a battle between TEA Party Republicans…translation: fiscally responsible Republicans…and the ‘old guard’ establishment types…the last thing we need as we countdown to the mid-terms is any more division between the party loyal and the party’s next generation of leaders. The last thing we need for sure but could this move of Boehner’s have actually been done to bring the two factions together…let me explain.

Playing devil’s advocate, let’s look first at what this vote appears on the surface to be…Boehner’s supposed sell-out appears as an out-and-out victory for, as well as a total capitulation to, Barack HUSSEIN Obama and Harry Reid who must be ‘high-fiving’ each other over the fact that they pulled off yet another screwing of ‘We the People’…or did they? And I just bet those Senate Republicans… Republicans who stood in unison with the Democrats in saying that spending money for previously incurred obligations and debts is a must to assure the financial standing of the federal government …must have salivated as they awaited their turn to vote to complete the ‘supposed’ sell-out of the American people…the American people who elected them to their bidding NOT the bidding of what looks like to some to be a traitor.

And in his outward pushing for this approval without attaching ‘conditions’ Boehner showed exactly where he stood in regards to our veterans for he dropped the condition that would have tied the debt ceiling increase to a repeal of cuts to military retirement pensions…but what’s NOT being said…at least by the media…is that this will still be voted on as a stand-alone measure, meaning these cuts can still be done away with.

And so it appears that the ‘Boehner Rule’ of 2011,where he stated that any debt ceiling increase must be offset by an equivalent spending cut was just empty words. And right now it sure seems that way. However, those Republicans who voted for this approval are presenting a far different scenario as they are saying they voted as they did to avoid yet another politically damaging legislative impasse over spending…and they just might be right as now some leading Republican strategists and pundits (including Townhall.com’s Financial Reporter and FOX News Contributor Guy Benson) are coming to their defense saying that what appears to be a debt ceiling capitulation actually is a clever ploy by Boehner to keep the focus one hundred percent on ObamaCare come the mid-terms…as it should be because ObamaCare is Barack HUSSEIN Obama’s Achilles heel.

Remember, many Democrats up for re-election in November are already distancing themselves from ObamaCare, so a smart Republican strategy would be to use ObamaCare against them…to slam them with it non-stop…but that can’t be done if other issues are hanging around. So now let’s think this through more clearly and realize that by this vote coming down as it did…with Boehner knowing beforehand that he did NOT have the votes to stop it…the Republicans have now actually cleared off their plate and taken away any of the obstacles the Democrats could use against them.

Everything else still hanging around can and will be voted on separately and how the Democrats vote on those issues…especially anything involving our military and our veterans…will be completely owned by them along with any and all ramifications that come with their votes. And this translates into the Democrats NOT being able to blame the Republicans for causing another government shutdown because they refused to raise the debt ceiling.

Poor Democrats…anything that happens from now on they will have built…and they will now own.

So if you look at it this way Boehner’s move was actually quite clever for now Republicans across the entire ideological party spectrum…from hardcore Conservatives to TEA Party Republicans to the more moderate Republicans…all who are in agreement that another round of political brinkmanship most likely would harm the party come November…just like it did after October’s government shutdown…has now had all obstacles and baggage removed by this one vote, thus clearing the way for ObamaCare to be used as the arrow to be shot right into Obama’s Achilles heel.

And the prize will be the Republicans re-taking the Senate and increasing their majority in the House…and maybe just maybe this was John Boehner’s plan all along. After all, even a RINO…like a broken clock…is right twice a day.

And from a devil’s advocate perspective it does make sense, but I’ll leave it up to you to decide…