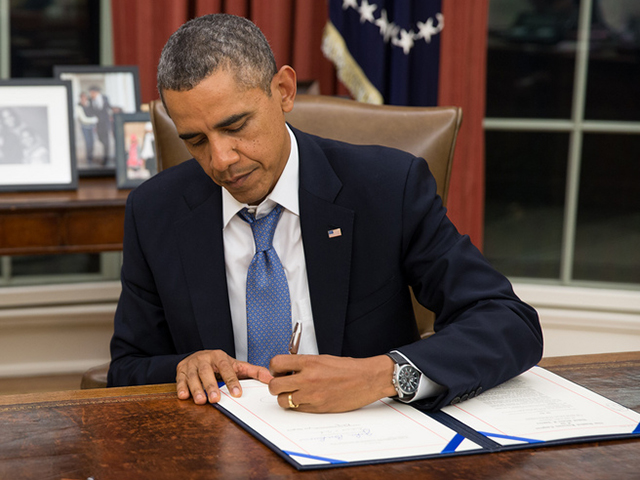 “I would ask any business leader out there, any governor, any mayor, any local leader listening: do what you can to raise your employees’ wages,” he said.

This is the same administration that told us we needed to “spend our way out of debt.” This is Obamanomics in play and it is disastrous, because it denies basic economics.

Even worse than that is the fact that the Constitution does not give authority to the Executive Branch to raise spending (which is what this is) in this manner. That authority is invested in the Congress, not the Executive.

In fact, nowhere in the Constitution is the power to raise the minimum wage for any workers given to the Executive.

While some point to Lyndon Johnson’s executive order, which armed the secretary of Labor with enforcement authority to ensure equal opportunities of minorities in federal contractors’ recruitment, hiring and training as a step in this direction, Rep. David Schweikert (R-AZ) says otherwise.

“I have this intense concern that this president is chewing up the Constitution by the excessive use of what he believes is presidential authority,” the Arizona congressman said in December.

Jenn Brochetta at Demos.com claims that Obama’s authority to do this stems from a 65 year old statute called the Federal Property and Administrative Services Act of 1949, aka the “Procurement Act.”

According to Brochetta, “The Procurement Act gives the President broad authority to set the terms of federal contracts. Under this law, the President has the power to prescribe policies and directives that are in his judgment necessary to an economical and efficient system for obtaining property and services. The breadth of power that Congress gave to the President by this statute was meant to guarantee him the same kind of flexibility in determining best contracting practices that characterizes private sector transactions.”

While she says the president’s statutory authority is “plainly rooted in the Procurement Act,” she goes on to state “whether this particular directive is legally proper—that is, whether Obama has exceeded the bounds of his authority under the statute—depends on whether the order (a minimum wage of $10.10 per hour for federally funded workers on federal contracts) has a “sufficiently close nexus” to the goals of economy and efficiency.”

This is the problem when you write laws that infringe on the Constitution (That means they are unconstitutional). The language Brochetta is using here from the Procurement Act really gets at the heart of the issue and that is this will increase spending. Where is Congressional legislation for this additional spending? While Ms. Brochetta points to an Act, she does not point to authority granted in the Constitution. This seems to be the real issue.

Both Congress and the President have certain defined and limited powers. In those limited powers is not the ability to raise the minimum wage for federal contract workers or anyone else.

“I think it’s a constitutional violation,” King said on CNN. “We have a minimum wage. Congress has set it. For the president to simply declare ‘I’m going to change this law that Congress has passed,’ is unconstitutional. He’s outside the bounds of his Article II limitations.
“This threat that the president is going to run the government with an ink pen and executive orders, we’ve never had a president with that level of audacity and that level of contempt for his own oath of office,” King added.

“This idea that he’s just going to go it alone, I have to remind him we do have a constitution. And the Congress writes the laws, and the President’s job is to execute the laws faithfully. And if he tries to ignore this he’s going to run into a brick wall,” said Speaker of the House John Boehner.

“Were just not going to sit here and let the President trample all over us,” Boehner added.

OK, seriously? This is exactly what House Republicans have done. They’ve let the Obama administration trample over them when it comes to the various scandals. Not one person in this administration has been held accountable on any of these scandals, and Fast and Furious is going on four years! Boehner and company have been trampled on when it came to the sequester, the fiscal cliff, the debt ceiling because their “brick wall” is made of toilet paper. They are going to get trampled on when it comes to immigration. You can see it coming and eventually they are going to cave in on the rights of gun owners that they are supposed to protect. Again, anyone watching knows the history.

Furthermore, just remember that it was John Boehner, who in his victory speech in 2010 declared, “While our new majority will serve as your voice in the people’s House, we must remember it is the president who sets the agenda for our government.”

Well Johnny Boy, he’s been setting the agenda and, for the most part, you’ve been falling right in line with it, despite it being unconstitutional. In fact, Boehner has only himself and other establishment Republicans to blame for what has taken place here. They just gave up the ghost on the debt ceiling! How many weeks do you suppose we are going to have to wait to see Boehner’s brick wall collapse? God give us men of integrity to stand up to the criminals in Washington!