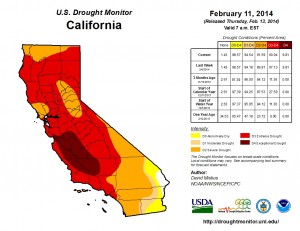 Did you know that the U.S. state that produces the most vegetables is going through the worst drought it has ever experienced and that the size of the total U.S. cattle herd is now the smallest that it has been since 1951?  Just the other day, a CBS News article boldly declared that “food prices soar as incomes stand still“, but the truth is that this is only just the beginning.  If the drought that has been devastating farmers and ranchers out west continues, we are going to see prices for meat, fruits and vegetables soar into the stratosphere.  Already, the federal government has declared portions of 11 states to be “disaster areas”, and California farmers are going to leave half a million acres sitting idle this year because of the extremely dry conditions.  Sadly, experts are telling us that things are probably going to get worse before they get better (if they ever do).  As you will read about below, one expert recently told National Geographic that throughout history it has been quite common for that region of North America to experience severe droughts that last for decades.  In fact, one drought actually lasted for about 200 years.  So there is the possibility that the drought that has begun in the state of California may not end during your entire lifetime.

According to NBC News, businesses across the region are shutting down, large numbers of workers are leaving to search for other work, and things are already so bad that it “calls to mind the Dust Bowl of the 1930s“…

In the state’s Central Valley — where nearly 40 percent of all jobs are tied to agriculture production and related processing — the pain has already trickled down. Businesses across a wide swath of the region have shuttered, casting countless workers adrift in a downturn that calls to mind the Dust Bowl of the 1930s.

If you will recall, there have been warnings that Dust Bowl conditions were going to return to the western half of the country for quite some time.

Now the mainstream media is finally starting to catch up.

And of course these extremely dry conditions are going to severely affect food prices.  The following are 15 reasons why your food bill is going to start soaring…

#1 2013 was the driest year on record for the state of California, and 2014 has been exceptionally dry so far as well.

#2 According to the U.S. Drought Monitor, 91.6 percent of the entire state of California is experiencing “severe to exceptional drought” even as you read this article.

#3 According to CNBC, it is being projected that California farmers are going to let half a million acres of farmland sit idle this year because of the crippling drought.

#4 Celeste Cantu, the general manager for the Santa Ana Watershed Project Authority, says that this drought could have a “cataclysmic” impact on food prices…

Given that California is one of the largest agricultural regions in the world, the effects of any drought, never mind one that could last for centuries, are huge. About 80 percent of California’s freshwater supply is used for agriculture. The cost of fruits and vegetables could soar, says Cantu. “There will be cataclysmic impacts.”

#5 Mike Wade, the executive director of the California Farm Water Coalition, recently explained which crops he believes will be hit the hardest…

#6 As I discussed in a previous article, the rest of the nation is extremely dependent on the fruits and vegetables grown in California.  Just consider the following statistics regarding what percentage of our produce is grown in the state…

–99 percent of the artichokes

–half of bell peppers

–90 percent of the leaf lettuce

–a third of the fresh tomatoes

#7 Of course it isn’t just agriculture which will be affected by this drought.  Just consider this chilling statement by Tim Quinn, the executive director of the Association of California Water Agencies…

“There are places in California that if we don’t do something about it, tens of thousands of people could turn on their water faucets and nothing would come out.”

#8 The Sierra Nevada snowpack is only about 15 percent of what it normally is.  As the New York Times recently explained, this is going to be absolutely devastating for Californians when the warmer months arrive…

Experts offer dire warnings. The current drought has already eclipsed previous water crises, like the one in 1977, which a meteorologist friend, translating into language we understand as historians, likened to the “Great Depression” of droughts. Most Californians depend on the Sierra Nevada for their water supply, but the snowpack there was just 15 percent of normal in early February.

Pumping from aquifers is so intense that the ground in parts of the valley is sinking about a foot a year. Once aquifers compress, they can never fill with water again. It’s no surprise Tom Willey wakes every morning with a lump in his throat. When we ask which farmers will survive the summer, he responds quite simply: those who dig the deepest and pump the hardest.

#10 According to an expert interviewed by National Geographic, the current drought in the state of California could potentially last for 200 years or more as some mega-droughts in the region have done in the past…

California is experiencing its worst drought since record-keeping began in the mid 19th century, and scientists say this may be just the beginning. B. Lynn Ingram, a paleoclimatologist at the University of California at Berkeley, thinks that California needs to brace itself for a megadrought—one that could last for 200 years or more.

#11 Much of the western U.S. has been exceedingly dry for an extended period of time, and this is hurting huge numbers of farmers and ranchers all the way from Texas to the west coast…

The western United States has been in a drought that has been building for more than a decade, according to climatologist Bill Patzert of NASA’s Jet Propulsion Laboratory.

“Ranchers in the West are selling off their livestock,” Patzert said. “Farmers all over the Southwest, from Texas to Oregon, are fallowing in their fields because of a lack of water. For farmers and ranchers, this is a painful drought.”

#12 The size of the U.S. cattle herd has been shrinking for seven years in a row, and it is now the smallest that it has been since 1951.  But our population has more than doubled since then.

#13 Extremely unusual weather patterns are playing havoc with crops all over the planet right now.  The following is an excerpt from a recent article by Lizzie Bennett…

Peru, Venezuela, and Bolivia have experienced rainfall heavy enough to flood fields and rot crops where they stand. Volcanic eruptions in Ecuador are also creating problems due to cattle ingesting ash with their feed leading to a slow and painful death.

Parts of Australia have been in drought for years affecting cattle and agricultural production.

Rice production in China has been affected by record low temperatures.

Large parts of the UK are underwater, and much of that water is sea water which is poisoning the soil. So wet is the UK that groundwater is so high it is actually coming out of the ground and adding to the water from rivers and the sea. With the official assessment being that groundwater flooding will continue until MAY, and that’s if it doesn’t rain again between now and then. The River Thames is 65 feet higher than normal in some areas, flooding town after town as it heads to the sea.

#14 As food prices rise, our incomes are staying about the same.  The following is from a CBS News article entitled “Food prices soar as incomes stand still“…

While the government says prices are up 6.4 percent since 2011, chicken is up 18.4 percent, ground beef is up 16.8 percent and bacon has skyrocketed up 22.8 percent, making it a holiday when it’s on sale.

#15 As I have written about previously, median household income has fallen for five years in a row.  So average Americans are going to have to make their food budgets stretch more than they ever have before as this drought drags on.

If the drought does continue to get worse, small agricultural towns all over California are going to die off.

For instance, consider what is already happening to the little town of Mendota…

The farms in and around Mendota are dying of thirst. The signs are everywhere. Orchards with trees lying on their sides, as if shot. Former farm fields given over to tumbleweeds. Land and cattle for sale, cheap.

Large numbers of agricultural workers continue to hang on, hoping that somehow there will be enough work for them.  But as Evelyn Nieves recently observed, panic is starting to set in…

Off-season, by mid-February, idled workers are clearly anxious. Farmworkers and everyone else who waits out the winter for work (truckers, diesel providers, packing suppliers and the like) are nearing the end of the savings they squirrel away during the season. The season starts again in March, April at the latest, but no one knows who will get work when the season begins, or how much.

People are scared, panicked even.

I did not write this article so that you would panic.

Yes, incredibly hard times are coming.  If you will recall, the 1930s were also a time when the United States experienced extraordinarily dry weather conditions and a tremendous amount of financial turmoil.  We could very well be entering a similar time period.

Worrying about this drought is not going to change anything.  Instead of worrying, we should all be doing what we can to store some things up while food is still relatively cheap.  Our grandparents and our great-grandparents that lived during the days of the Great Depression knew the wisdom of having a well-stocked food pantry, and it would be wise to follow their examples.

Please share this article with as many people as you can.  The United States has never faced anything like this during most of our lifetimes.  We need to shake people out of their “normalcy bias” and get them to understand that big changes are coming. 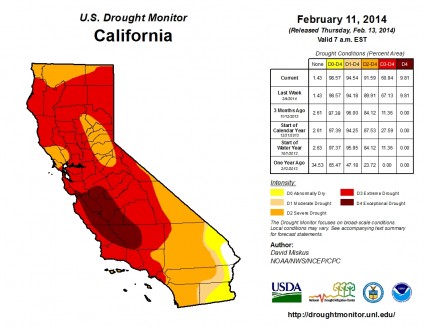