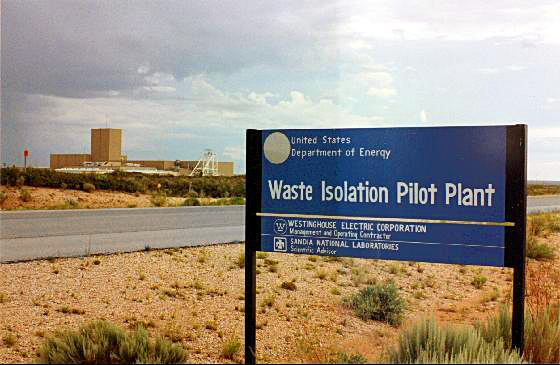 A nuclear waste facility near Carlsbad, New Mexico is the site of an airborne radiation leak. The high levels of particles were detected late Friday night at the Waste Isolation Pilot Plant.

WIPP is housed at an old salt mine, and toxic waste like plutonium is housed half a mile underground.

All of the 139 workers were sequestered on site.

“These are radionuclides that are of a hazard if inhaled, but it is not the kind of radiation that penetrates, and so the primary concern for the release of this nature is (through) the ventilation passageway and that’s why our employees are sequestered in place,” said Roger Nelson, a Department of Energy spokesman. (source)

The staff members have all tested negative for contamination, and nonessential employees have been cleared to go home.

There have been false alarms in the past, but the DoE said initially that this was a legitimate leak.

“They (air monitors) have alarmed in the past as a false positive because of malfunctions, or because of fluctuations in levels of radon (a naturally occurring radioactive gas),” Department of Energy spokesman Roger Nelson said.

“But I believe it’s safe to say we’ve never seen a level like we are seeing. We just don’t know if it’s a real event, but it looks like one,” he said.

It was not yet clear what caused the air-monitoring system to indicate that radioactive particles were present at unsafe levels, Nelson said. (source)

The Department of Energy is conducting testing at the site. There is no indication of what caused the leak at this time.

According to the DoE, despite their initial statement, there’s no longer real cause for concern. Saturday night, they released updated measurements on the number of potentially harmful airborne alpha and beta particles and said that none seems to have reached the surface. The story changed dramatically, taking a turn for the positive, as Nelson said that the leak was “not significant”.

“Monitors at the WIPP boundary have confirmed there is no danger to human health or the environment,” the department said late Saturday night. “No contamination has been found on any equipment, personnel, or facilities.” (source)

Do you feel reassured?