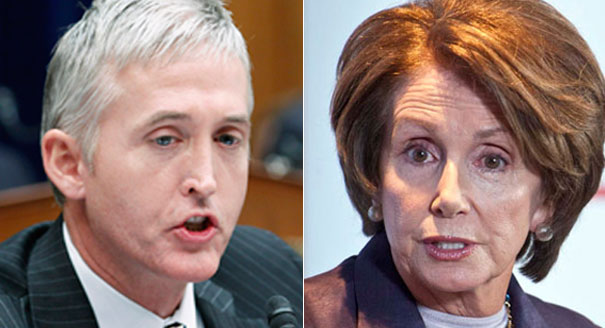 South Carolina Representative Trey Gowdy (R) is not one for mincing words. He pretty much says what he thinks, which is why he got elected and which is why he has gained even greater respect in pursuing the scandals of the Obama administration. Appearing with Greta van Susteren on Fox News’ On the Record, Gowdy said in response to being asked about Nancy Pelosi’s (D-CA) comments about the vote for contempt during the Fast and Furious investigation of Attorney General Eric Holder were “mind numbingly stupid.”

“They’re going after Eric Holder because he is supporting measures to overturn these voter suppression initiatives in the states. This is no accident, it is no coincidence. It is a plan on the part of Republicans,” House Minority Leader Nancy Pelosi said at her weekly press conference.

“You know my friend Allen West said the race card was the last card in the deck,” Gowdy said. “I think former Speaker Pelosi has opened up a new deck and has found the 2 of clubs. I could not believe it when I heard her saying that. Is that all you have to come back with?”

“Is that the best you can come up with, is that we got together in this grand scheme to suppress votes and I’m sure she didn’t say southern states but that’s what she meant,” Gowdy continued.

“It’s really beneath the office of a member of Congress to say something that outrageous and the fact that she was once the Speaker is mind numbing. I honestly, and I have her a lot in my 16 years as a prosecutor, I couldn’t believe the words coming out of her mouth. But keep in mind, Greta, this is the same woman who said she could have arrested Karl Rove any day she wanted. So I don’t know what was wrong with her yesterday or today or whenever she said that, but I would schedule an appointment with my doctor if she thinks that we are doing this to suppress votes this fall. That is mind-numbingly stupid.”

Well go on with your bad self Representative Gowdy! Tell us what you really think. (This is why I like this guy.)

This isn’t the first time the race card has been played by Pelosi, or the Democrats for that matter. In fact, it’s often their play.

What Pelosi failed to speak about though was the fact that the entire Black caucus walked out on the vote! That seems just a bit racist doesn’t it?

Pelosi has stuck to her guns though. She’s been claiming since June 2012 that the vote to hold Eric Holder in contempt of Congress for not turning over documents, which may implicate him further in the Fast and Furious gun smuggling scandal, was all about voter suppression, or in Democrat language, “it was a vote by a bunch of white people against blacks.”

Pelosi’s comments are always “mind numbingly stupid” because they never are reality. They are always a misdirection from what the issue is, but never about the issue itself. No one has yet to be held accountable in the Fast and Furious scandal which has led to the deaths of hundreds of Mexicans and at least two federal agents.