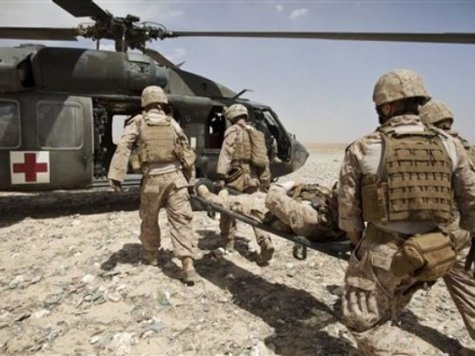 US soldiers in Afghanistan are now forced to fight a two-fronted war. Before each deployment, these soldiers understand fully that day after day they will do battle against relentless terrorists with shifting loyalties and unspeakable hatred. But what none of them could have foreseen was the killing field that would open from their rear…the Continental United States.

Our government’s incessant tightening of already restrictive ROE (Rules of Engagement), compounded by the failed COIN (Counterinsurgency) strategy—also known as “winning hearts and minds,” has made an otherwise primitive enemy formidable.

Our best and brightest come home in body bags as politicians and lawyers dine over white linen tablecloths; writing, modifying, and re-modifying these lethal rules…rules that favor the enemy rather than the American soldier. Rules so absurd they’re difficult to believe until you hear the same stories over and again from those returning from battle.

In a delicate discussion with an Army Ranger who recently left the military, we heard the following: “I had to get out. I have a family who needs me. I didn’t join to be sacrificed. I joined to fight.” This decision came shortly after he lost a close friend to the ROE. He went on to explain: the Taliban had attempted an ambush on his friend’s squad, but quickly realized they were in a battle they couldn’t win and began retreating. While chasing them, the US soldiers were ordered not to engage due to the slight chance the Taliban had laid down their arms as they ran through some type of shack. While arguing with leadership at the JOC (Joint Operations Center) his friend was shot and killed.

A Navy SEAL who left his job only a few years shy of full retirement said the following: “I got out because I couldn’t take it anymore. We tried to explain how much reckless danger we were being exposed to and they told us we were being illogical.”

This type of response has created a growing compromise of confidence between our war fighters and senior military leadership. His argument wasn’t illogical at all.

A gut-wrenching pattern began forming in early 2009…a pattern completely ignored by Congress, the White House, and apparently the DOD.

In the first seven plus years of war in Afghanistan (October, 2001 – December, 2008) we lost 630 US soldiers. In early 2009, this administration authorized the implementation of the COIN strategy. Over the next five years, the US death toll skyrocket to 2,292.

Seventy-three percent of all US deaths in Afghanistan have taken place since 2009.

While concern over being killed due to these policies weighs heavy on the minds of those we’ve spoken with, the deepest pit-in-the-stomach comes from fear of prosecution should they violate these absurd and ever-changing ROE. The last thing a war fighter should ever be forced to experience is unnecessary fear.

However, today’s war fighters have the grave misfortune of serving leaders who elevate the virtues of inaction over action. The message? If you dare use your training or your gut instinct, if you have the fortitude to fight for your life, or the desire to kill the enemy, there is a good chance you will be punished.

The physiological capacities of a true patriot cannot tolerate the vile stench of injustice, especially when perpetrated against those who defend us. Its wretched aroma permeates the core and demands a response.

We’re counting on you, the American patriot, for that response. We must defend our defenders. Please, spread the news and demand change.

Learn more about your Constitution with Billy & Karen Vaughn and the Institute on the Constitution and receive your free gift.

Billy and Karen Vaughn are the parents of fallen Navy SEAL, Aaron Carson Vaughn (SEAL Team VI). The downing of Extortion 17 was the day Aaron’s life ended and the day their lives began again.

As Billy and Karen began searching for answers their eyes were opened to vile atrocities being played out on America’s military.

They’ve now become advocates for our defenders…exposing the criminal Rules of Engagement, which have unnecessarily cost so many American soldiers their lives.

Our defenders deserve to be defended. The burden of their covering rests on us, the patriots of this nation. It is imperative that we stand together and demand change.

Billy and Karen spend a considerable amount of time on Capitol Hill, and have shared their story on hundreds of local, state and national radio outlets including Fox & Friends, The Today Show, The Andrew Wilkow Show, The Willis Report, The Kelly File, The Huckabee Show, Hannity’s America, Geraldo at Large, and more