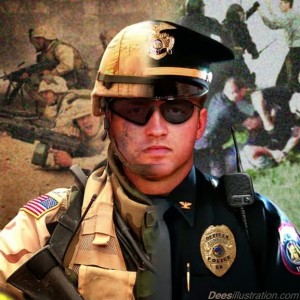 On January 20, I wrote an article entitled “Upcoming Military Drill Off Limits To Reporters,” in which I reported on the announcement that South Carolina’s Richland County Sheriff’s Office would be engaged in joint training exercises with unidentified units from Ft. Bragg.

The official Richland County Sheriff’s Department’s press release stated that “Citizens may see military and departmental vehicles traveling in and around rural and metropolitan areas and may hear ordinance being set off or fired which will be simulated/ blanks and controlled by trained personnel.”

The release also stated that the exercise was being held “Due to Sheriff Leon Lott’s longstanding commitment to making sure that deputies are trained and prepared for every event and potential threat and his desire to assist the military to ensure their preparations.”

It is worth noting that Ft. Bragg hosts some of the U.S. Army’s more elite units such as Special Forces as well as more elite airborne and aviation support units. Ft. Bragg is also home to the elite Delta Force.

Beyond this information, however, very little was known about the drills. That is, until now.

According to independent sources, Special Forces were indeed involved in the drills in concert with local civilian police forces.

What is most disturbing, however, is that, according to sources, both the civilian police and U.S. military forces were also training to raid farm houses and engage in domestic raids.

No wonder the Richland County Sheriff’s Department was so tight-lipped about the operations they were taking part in during the process of these joint drills.

The fact that the police and military are engaging in joint drill exercises in violation of Posse Comitatus and a long-standing American tradition of separation between domestic policing and military activity is concerning enough. However, the fact that they are training for domestic operations such as raiding American farm houses, setting up domestic checkpoints, and conducting other related raids on the home-front should be terrifying to every single American that desires to keep what little shred of freedom they have left.

If the reports of these sources are accurate, the American military and indeed the Richland County Sheriff’s Department clearly see the American people and the people of South Carolina as the enemy.

Brandon Turbeville is an author out of Florence, South Carolina. He has a Bachelor’s Degree from Francis Marion University and is the author of six books, Codex Alimentarius — The End of Health Freedom, 7 Real Conspiracies, Five Sense Solutions and Dispatches From a Dissident, volume 1 and volume 2, and The Road to Damascus: The Anglo-American Assault on Syria. Turbeville has published over 275 articles dealing on a wide variety of subjects including health, economics, government corruption, and civil liberties. Brandon Turbeville’s podcast Truth on The Tracks can be found every Monday night 9 pm EST at UCYTV.  He is available for radio and TV interviews. Please contact [email protected]