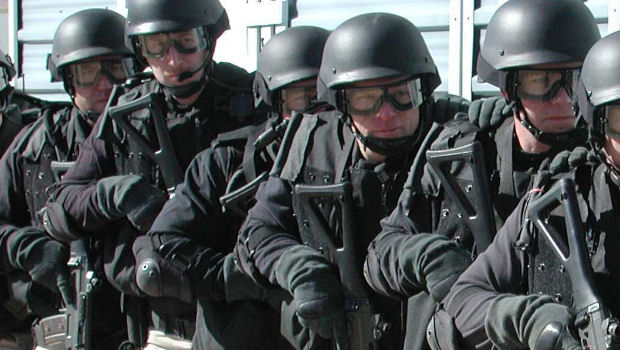 Nearly two weeks ago, following posting a couple of articles from Mac Slavo and Dean Garrison on the comments by Supreme Court Justice Antonin Scalia regarding the return of American Internment Camps, I also read an article by Dr. Joel McDurmon titled A Rising Police State is a Reality. McDurmon’s article was about the topic of Scalia’s comments and the increasing number of stories we’ve been hearing about the militarization of local police departments and the growing use of SWAT teams. However, while I was familiar with the things he wrote about, it was in the comment section that I found a little nugget from the CATO Institute.

Commenter Jerri Lynn Ward provided a link to a piece by Radley Balko from August 2006. In that article, Balko seems to implicate Justice Scalia as being part of the problem of the rise of the Police State. He writes:

In his odd opinion in the Hudson v. Michigan case, Supreme Court Justice Antonin Scalia dismissed the exclusionary rule as an effective remedy when police conduct an illegal no-knock raid because, Scalia argued, police departments across the country have implemented better internal review procedures and oversight functions to deal with officer misconduct. In making that argument, Scalia went so far as to cite the work of respected criminologist Prof. Sam Walker, who later asserted that Scalia had misappropriated his work.

Balko then went on to list four incidents in which SWAT teams were used resulting in fatal shootings of non-violent residents. In one incident, one ounce of marijuana was found as the victim’s body was riddled full of bullet holes. In another instance, a Virginia man was shot and killed over wagering on sports events.

Then there was Kenneth Jamar, who was shot and nearly killed by a SWAT team that kicked in his bedroom door looking for his nephew. They were at the wrong address. To make matters worse, the address on the search warrant wasn’t even the address they were at.

Finally, a Mississippi man was beat to death while in the custody of the police. No arrests were made and no charges filed against the officers involved.

In all of these incidents, the victims are said to be to blame, not the tyrannical police officers.

Balko commented on the list by stating, “In all of the cases, one can’t help but wonder if the wheels of justice would be turning as slowly if the victim were a law enforcement officer and the assailant a civilian, instead of the other way around.”

I agree and that is usually how things happen.

In December, Tom Woods interviewed John Whitehead, founder of the Rutherford Institute and author of A Government of Wolves: The Emerging American Police State.

Whitehead told Woods, “I’m a constitutional lawyer, I’ve been litigating cases throughout the courts, including the Supreme Court, for over 36 years. So I’ve looked at what’s happening in the country, and I’m alarmed…we all should be concerned when we see these things happening.”

Mr. Whitehead noted that since the early 1980s there was an estimated 3,000 SWAT team raids. However, he went on to say “We’ve seen the rise of SWAT Team raids, approximately 70,000 – that may be a low figure.”

Tying those raids to the unconstitutional surveillance of the NSA, Whitehead said, “We live in a very precarious state.”

Whitehead isn’t the only one saying these things either. “People on the right and left are saying that there’s really no place to hide anymore,” he told Woods. “You may not be doing anything wrong by the way, and you may get the arrival of a SWAT team at your door. So you’re going to be watched. Here’s the thing that I say to most people. I stand up and fight for freedom everyday. It’s not easy. I defend people who picket for our liberties, and they get arrested. It’s not easy…That’s where we’re at today. I believe we have about ten years before we’re going to see something so ominous that we can’t deal with it – so the time to act is now.”

We’re still waiting on answers for the cold blooded murder of Jose Guerena, a Marine who was shot more than 50 times by members of the Pima County Sheriff’s Department as he answered his door, then was left to bleed out for an hour, while not being given medical attention. Consequently, nothing was found in his home and not one officer was brought to justice.

Decorated Marine Brandon Raub faced a tyrannical grab by police. Whitehead represented him and he was finally released.

This is not to say all policemen are bad. Certainly there are a lot of good policemen out there. However, for anyone to deny that the police state in America is growing are either in on the militarization of police departments or have their heads stuck in the sand.

I have liked many things Justice Scalia has had to say. However, while Scalia has warned the American people about internment camps, it’s his ruling, based on a faulty understanding of internal police review and oversight (also known as CYA), that has been part of the problem in the advancement of the police state in America.

I’ll echo the words of John Whitehead when it comes to pushing back against the police state. “Either you’re an activist, or you’re going to allow this to happen, folks. That’s all I can say. And shame on you if you do.”