Wikileaks has released a secret cable from then—U.S. Secretary of State Henry Kissinger to former child star-turned-U.S. Ambassador to Ghana Shirley Temple Black which shows the more amorous side of Kissinger:

Of course, it was sent on May 3, 1976 — just two years after he married long-time Nelson Rockefeller aide Nancy Sharon Maginne, to whom he is still married today.

Reading the cable, the official kiss shown between Kissinger and Temple Black in the AP photo below is likely not the kind Kissinger was talking about: 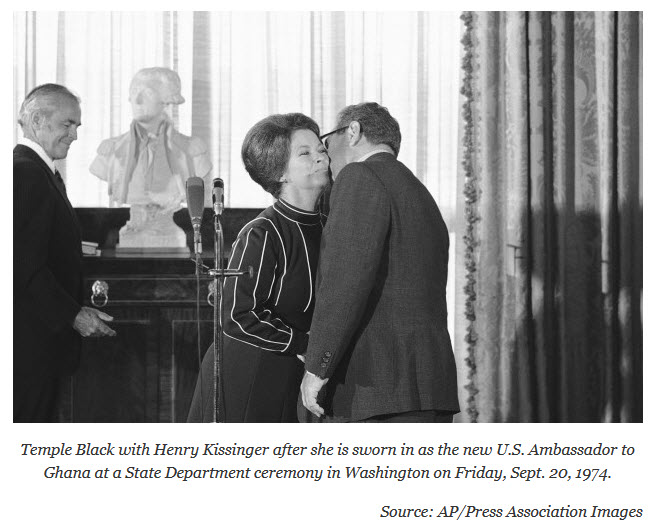 What makes it creepier than the fact that it’s Henry Kissinger — unofficial envoy of the Rockefeller Empire and a member of the Bilderberg Group, the Council on Foreign Relations, Aspen Institute, Bohemian Grove, Trilateral Commission, etc. who it has been argued should have been indicted for war crimes and crimes against humanity for his role in the bombings of Cambodia and Laos during the Vietnam War that resulted in the deaths of half a million people — is the fact that many have posited for years that Shirley Temple was a likely victim of the earlier versions of the CIA’s MK Ultra Mind Kontrolle (Control) program before the CIA was officially formed (see also here and here).