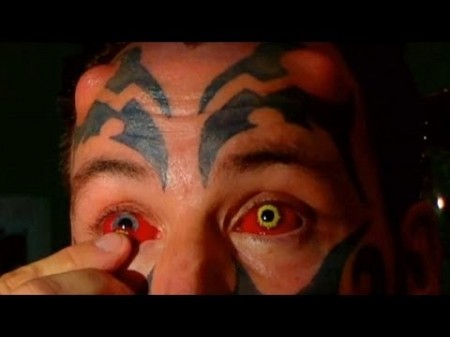 When does body modification go too far?  In recent years, the popularity of tattoos and body piercings has soared, but now there are thousands of people around the globe that are taking body modification to ridiculous extremes.  For example, would you be willing to have your tongue split in two so that you could have a forked tongue?  What about getting eyeball tattoos or having titanium horns implanted in your head?  To most people, doing such things would be unimaginable, but there is a growing subculture of individuals out there that truly seem to enjoy “pushing the envelope” and seeing what is possible.  Some of them want to look like cats, some want to look like vampires, others want to look like aliens and some even want to look like the devil.  Yes, you read that correctly.  You are about to read about one man that is purposely modifying his body so that he will look as much like the devil as possible.  In fact, he even plans to add a tail someday.

If these were just isolated incidents, it probably would not be that big of a deal.  But as CNN recently reported, there are now thousands of people that have embraced “extreme body modification” as a lifestyle and the movement is growing rapidly.  In fact, CNN says that there is one website alone that has 3 million photos of extreme body modification…

No, these aren’t features from the latest fantasy film. Today, thousands of people are getting their bodies modified in all sorts of bizarre and unusual ways. Tattoos are just the tip of the iceberg for people interested in body modification, referred to as “body mutilation” by detractors.

People called “body modification artists” perform these unconventional surgical procedures, typically on young clients. These treatments range from the simple, such as implanting metal bolts on a person’s neck, to the extreme, such as creating ridges under a person’s skin in order to make him look like a human lizard.

So precisely what does this say about the current state of our society?

Often, the way that people express themselves outwardly is a reflection of who they really are on the inside.

In the case of a 43-year-old man from the UK named “Diablo Delenfer”, his stated goal is to look as much like the devil as possible…

Among the operations that Diablo Delenfer – real name Gavin Paslow – has so far endured are having his tongue sliced in two to fork it, sub-dermal implants to create a set of horns and an eyeball tattoo that has turned the whites of his eyes bright red.

But despite the pain, the 43-year-old insists he has no plans to stop. ‘I describe myself as a body modification artist,’ he explains.

‘I am a human curiosity but body modification is my life’s journey. It’s a little bit weird, a little bit eccentric but that’s what I am.’

As you can see from the video posted below, he definitely looks more than a “little bit weird”…

But he is actually far from the most extreme case of body modification out there.

To me, a 35-year-old attorney from Mexico named Maria Cristerna takes the cake.

She has tattoos and piercings over 98 percent of her body and she is known as “the Vampire Lady”.  When people see her coming, many of them cross over to the other side of the street because she literally looks like a monster…

The 35-year-old who grew up in a deeply religious family is covered head-to-toe in tattoos, had dental work so she appeares to have fangs and has even had titanium horns inserted into her head.

People used to walk on the other side of the road when they saw her coming.

The following video contains a news report about her.  It attempts to portray her as a “normal mother”…

I don’t know about you, but I don’t remember any mothers running around like that when I was growing up.

But you know what?  The Vampire Lady has become a mini-celebrity in recent years and she has traveled to events all over the world.

Our society is really starting to embrace this sort of thing.  And body modifications are not always just for cosmetic purposes.  For example, I wrote about the growing popularity of RFID microchip implants among young people the other day.  As time passes, it is going to become increasingly “cool” and “trendy” for young people to “enhance themselves” with various forms of technology.

As this trend grows, what will our society look like in a few years?

Personally, I don’t want anything to do with extreme body modifications, microchip implants or any other sort of “enhancements”.

What do you think about these things?